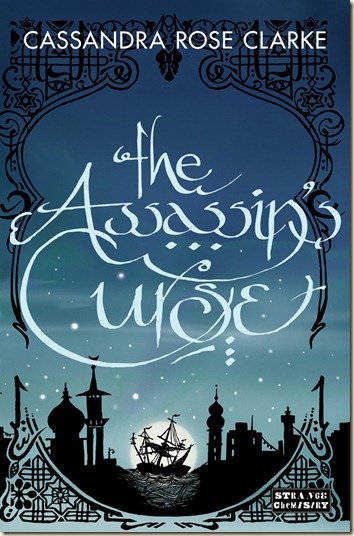 Here we have yet another interesting cover for one of Strange Chemistry’s upcoming, first wave of releases. And I really like it – especially the designs around the edges that look like Arabic text (they remind me ever-so-slightly of the Turkish signatures I used to see when I lived in Istanbul – the beautiful intricacy, only pared back quite considerably in this instance). It’s not as immediately eye-catching as the previous two Strange Chemistry covers I’ve seen (for Shift and Blackwood), but it’s still really nice and the novel sounds pretty cool.

Here’s the blurb for the novel:

Cassandra Clarke is a speculative fiction writer and occasional teacher living amongst the beige stucco of Houston, Texas, and is a graduate of the University of St. Thomas (class of 2006) and the University of Texas at Austin (2008). During the summer of 2010, she attended the Clarion West Writers Workshop in Seattle, where she enjoyed sixty-degree summer days. Having been born and raised in Texas, this was something of a big deal. She was also a recipient of the 2010 Susan C. Petrey Clarion Scholarship Fund.

Amanda Rutter, Strange Chemistry editor, had this to say about the novel:

“[The Assassin’s Curse] is a YA fantasy, but I consider it to have huge crossover appeal into an adult audience. The book features a teen called Ananna, a pirate princess who runs away from a forced marriage. Because the dishonour of this stings, the potential in-laws send an assassin after her to show that no one treats the Hariri clan in such a manner. Thanks to a rather nasty curse, the Ananna and said assassin end up bound together (much as they hate it) and must solve three impossible tasks to break the curse.

“This novel has echoes of Scott Lynch, Saladin Ahmed and Tamora Pierce. It has a defiant Arabian Nights feel to the story and is all round magnificent.”

I’m rather looking forward to this. Lots of promising things coming from Strange Chemistry in the near future, looking like they are going to offer similarly excellent books as their parent imprint, Angry Robot Books. Watch this space!

GIVEAWAY – An ARC of The Assassin’s Curse will be give to one randomly-selected commenter. (Selection will be made tomorrow night, winner announced Friday morning.)