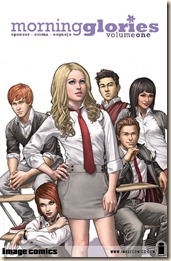 Morning Glory Academy is one of the most prestigious prep schools in the country, but something sinister and deadly lurks behind its walls. When six gifted but troubled new students arrive, they find themselves trapped and fighting for their lives as the secrets of the academy reveal themselves!

This is a little difficult to review at length, given the comic’s nature and the fact that I’m still not entirely sure what’s going on. This latter point is not, however, in a bad way. Morning Glories shows that a little mystery can go a long way to keeping readers interested and coming back for more. This is a twisted comic, but one that has a lot of potential.

A new class is arriving at the school. Each student was born on the same day, but from very different backgrounds. There are six students at the centre of this story, each with their own distinct characters – they are all somewhat broken in one way or another, a couple of them are arrogant, strong, Alpha-types. One is an emo-chick; one is an arrogant and entitled sociopath; one is the smart, gifted all-rounder; there’s also a geek, a tough, and a silent type. It makes for a diverse and interesting dynamic among the group.

The teachers scare the bejesus out of me. They are horrible sadists, subjection their wards to all forms of torture – physical, psychological, and pharmaceutical. It’s almost as if the creators took every childhood exaggeration of their least-favourite teacher and distilled them into a handful of characters. 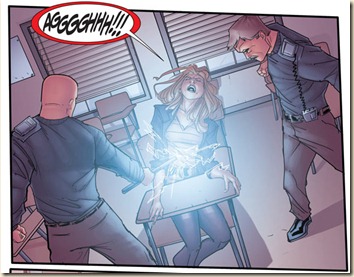 The new students don’t like or trust each other, but as events become weirder and more deadly, they start to form certain connections and partnerships. The panel below perfectly portrays the different levels of empathy and character, how self-involved some of the new students are (a scene which follows a couple of pages after the above torture scene): 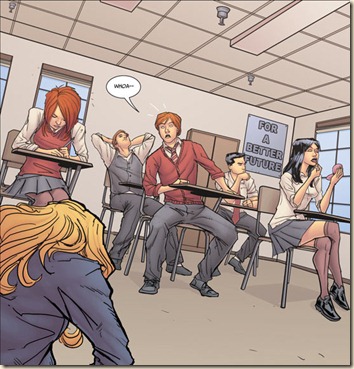 Something weird is definitely going on at Morning Glory Academy. After finishing this book, I still had no frikkin’ clue... It’s frequently compared to Lost, because it’s all about misdirection and stringing along the reader/viewer with tantalising hints and nuggets of information, while also throwing in the occasional red herring – what, for example, is the relevance of Jonathan Bell’s theorem (it crops up on a couple of occasions). It also has a couple of similarities to Alias, I thought (you’ll have to read a fair bit of the book to realise how and why, but I don’t want spoil things). After finishing this, I feel that I have to keep reading, and really want to find out more and know what the hell is going on!

The creative team certainly like shocking, cliff-hanger pages – the last page of the first chapter was particularly shocking. It’s not at all difficult to see why the series is so popular and successful, although I wonder how long they can maintain the obfuscation and weirdness before readers’ attentions start to wander.

As you can see from the images above, the book is rendered in very good, clean artwork. The team has gone for a nice, soft colour palette, too, which prevents the comic from becoming garish. There’s a good level of detail throughout, too.

At this point, though, this was a great read. Recommended if you want some twisted mystery in your comics. 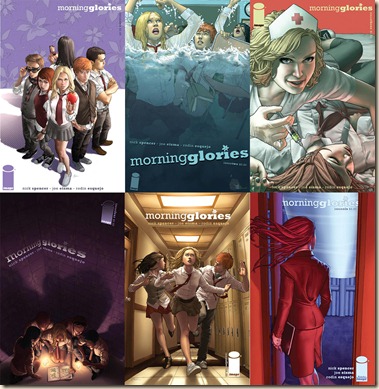