Last week, Barnes & Noble released this (although it is actually out of stock – predictable for any new piece of tech): 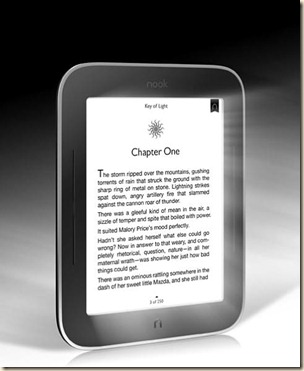 The Nook Simple Touch with GlowLight, which is apparently the “Only Reader designed for perfect bedtime reading”. In a cheeky move, they also released this graphic, explaining why “Nook is better than Kindle”: 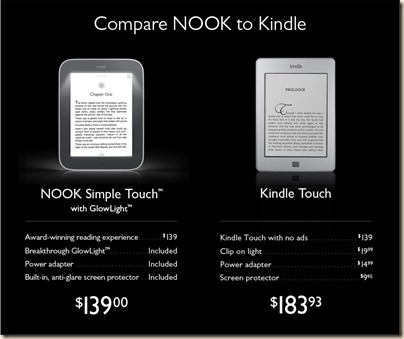 To be honest, this is less than convincing for me – I don’t need a light for my Kindle, admittedly, and have never thought to buy one.

Predictably, Amazon have now announced they “will launch new versions of its Kindle e-reader and tablet, including a monochrome e-reader with front lighting”, and apparently Amazon “is aiming to have the new e-reader in stores in July” (Reuters). It never fails to amaze me how quickly they’re able to bring these new models to market.

Apparently, while the Kindle has been extremely popular (I love mine, FYI), people “have had to buy an external light to attach to the device to read in the dark. The front light eliminates that problem”… Personally, I see this as a pretty strange complaint about Kindles – you would need a light to read a book, too, after all. It’s not the greatest imposition.

What do you think about eReaders with GlowLights or screen lights?