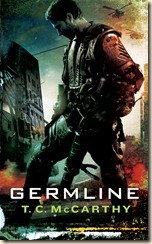 A journalist goes native in a future war, loses grip on reality…

War is Oscar Wendell’s ticket to greatness. A reporter for the Stars and Stripes, he has a pass to the front lines of a brutal conflict over natural resources, where genetics – the germline soldiers – battle heavily armed troops deep beneath the icy, mineral-rich mountains of Kazakhstan.

But the front is nothing like Oscar imagined. The genetic soldiers are more human than he bargained for, too. Hooked on a dangerous cocktail of drugs and adrenaline, lines are beginning to blur. And if Oscar doesn’t find a way out of the chaos soon, he may never get back.

I first heard about Germline quite a while ago, and I’ve been eagerly awaiting a chance to read it. As soon as it arrived in the post, I put aside the novel I was about to start, and dove right in. I’m glad I did – Germline is an intense, bizarre, and engrossing ride along with a man who is spiralling into his own private hell amidst what can only be described as a hell on earth (yes, he’s pretty unlucky…). It’s different to any other science-fiction I’ve read, and I will certainly be following the trilogy closely and eagerly.

Hyper-realism crashes with more surreal scenes of manic activity and Wendell’s slipping mind, as he tries to find a balance between keeping on top of what's happening to him and his desire to numb everything away. McCarthy has mentioned Michael Herr’s book on Vietnam (Dispatches) as a favourite read, and you quickly get the impression that the author has done a great job of evoking the chaos of warfare, and the emotional and psychological damage extended exposure to it can have on the soldiers and support staff. We’re not meant to be comfortable. This is not a novel of whimsy. It’s not pretty. It’s grim, dark and brutal. And it’s damned good.

Oscar “Scout” Wendell is a drug addict, who believes his path to journalistic redemption lies through reporting from the front lines of the war. He’s the first civilian to be granted this opportunity, and he doesn’t quite do the job that was expected. He embeds with a unit, grows close to its sergeant and quickly becomes addicted to “zip”, a frontline drug that suits his tastes perfectly, disconnecting him from reality in a way that can only be described as dangerous in the extreme. His decline and ordeal is relentless, depressing and written in a brisk, choppy prose style which kept me reading into the night. The novel actually spans quite some time, but due to Wendell’s state of mind, his – and therefore the reader’s – perception of time is fractured.

Reading Wendell’s story as he tells it (the narrative is first person) is often uncomfortable, as we really get inside his head. He lets down those around him, disappointing even those who give him every chance to make himself better, to get help and stop running away from himself and putting himself into harms way. The first half of the novel sees him spiral out of control until a moment of solitude forces self-reliance on him, which opens up the second act – that of his redemption (of a sorts). Addicted to the chaos of the conflict and warzone, Wendell avoids attempts by others to ship him home, and we witness his transition from rookie warzone reporter, a danger to others as well as himself, to a jaded old-hand. Still a danger to himself, of course, but also a font of advice for the next bunch of rookies. It’s not a role he cherishes or ever sought, but there are moments when you can appreciate and, perhaps, even admire the way he helps some of the new recruits and draftees (some of whom are only fifteen years old), as he finds a new direction and purpose for himself in the crucible of this future war.

Wendell’s co-stars are presented in an interesting and novel manner. Without giving away too many details, Wendell slowly comes to dislike learning people’s names – the increased anonymity perhaps further insulating him from the crushing sense of loss that a dead friend will evoke. A rookie who attaches himself to Wendell is referred to simply as “Kid” and another simply as “the Brit”. General Urqhart, one of the few named cast members, is a strange benefactor for Wendell, taking it upon himself to help Wendell both dry out and also stay alive. Urqhart’s almost as mad as our protagonist, only he doesn’t have the drugs to blame, and his madness comes more from his apparent thirst for glory and supreme attachment to the men under his command. The genetically enhanced fighters, all women, are a fascination for both Wendell and the reader: they are created solely for killing, yet are physically almost angelic – all of them are female, and they are ‘decommissioned’ on their eighteenth birthdays. Wendell has some rather strange experiences with the genetics, and there is a heart-wrenching moment mid-way through that only highlighted the tragedy of the genetics.

There are scenes of the novel that would be perfectly at home in Apocalypse Now, if only the Vietnam War had taken place in a snowy country – the intense combat scenes, the stifling and nerve-wracking hurry-up-and-wait life of a frontline grunt, and the reality disconnect that doesn’t only manifest in Wendell. A fair bit of this is pretty weird, but it’s fascinating. We learn of everything as and when Wendell does, so there aren’t any info-dumps or long passages of exposition to slow the plot. It’s the novel equivalent of learning-while-doing, and you’ve got to hit the ground running, become familiar with the lingo and slang of the front (which isn’t too difficult), otherwise Kaz will swallow you whole. Wendell’s unique civilian classification through the novel allows McCarthy to give readers a well-rounded view of the war at large, as he is rotated out of certain areas (sometimes because everybody’s dead) and into entirely new situations and dangers, experiencing quite a broad selection of warzone professions.

This review paints a pretty bleak picture of Germline’s story, and this is certainly intentional. However, it is not entirely dark, as there are elements of the story that evoke a sense of hope for the reader. For example, there are a few moments of surprising generosity among the madness – simple things, like tanks or transports stopping to give people lifts – that gives one hope for humanity surviving even these hellish times and places. In addition, Wendell’s story includes a love element, which is at once touching and also a little messed up.

The war is over resources (specifically, rare earth metals), which is all too believable – after all, most of the world’s deposits of these extremely important minerals are in inhospitable climates or unstable and/or unfriendly regions today (the minerals are essential to most modern-day technology and electronics, and China has the largest confirmed deposits in the world). Potential resource wars are a top concern among international relations experts, which gives the issues underlying the novel an all-too-real feel.

This is a novel that is difficult to “enjoy” in the sense that to say one enjoyed it would suggest you’re quite callous – McCarthy’s protagonist is put through emotional and physical hell in the novel. Instead, it may be better to say that readers will “intensely appreciate” the novel (thanks to Justin Landon via twitter for this phrase). The infrequent moments of humour in the novel are pretty black, but also well-placed that you smile or chuckle despite the often bad events that led to the aside or observation.

Visceral, brutal, intense and engrossing. It’s quite the read, from an interesting new voice in the genre. Germline is definitely highly recommended.

Posted by Civilian Reader at 1:21 AM