“The Madness Within” by Steve Lyons (Black Library) 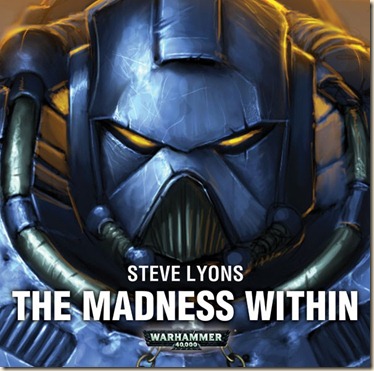 Desperate and isolated, Sergeant Estabann and Brother Cordoba of the Crimson Fists Space Marines are hunting the daemon that destroyed their battle-brothers. Their only hope remains with a Librarian on the edge of sanity, a potentially tainted Astartes who they are forced to trust. His psychic abilities can lead them to the daemon, where Estabann and Cordoba can avenge their brothers’ deaths. But is the greatest threat a foul denizen of the warp, or the power contained within a psyker’s mind?

The Madness Within is a pretty solid, straight-up Warhammer 40,000 tale in audio-drama medium. It’s not the best audio-drama I’ve listened to from the publisher, but it does tick off all the right boxes that make for an action-packed and entertaining future-war story. If you love the genre and the setting, then you should enjoy this, too. I did like the twist at the end, though, which I hadn’t predicted and certainly added an extra note of originality to proceedings, and making it stand out a bit more.

It’s a pretty interesting story: a depleted Crimson Fists squad is hunting a daemon on one of their recruitment worlds. The forces are slowly being whittled away by the protracted hunt, and they realise they have to mix things up. In order to improve their chances and replenish their forces, they bring back a Librarian who they believe had gone mad, and had been incarcerated in some form of Astartes punishment/torture device.

The stress of battle is taking its toll on the survivors, further exacerbated by the daemon’s tricks – they are getting paranoid and twitchy. Suspicion runs rampant among the battle brothers (more than I would have expected for a 41st Millennium squad of Astartes, as this put me in mind more of the Horus Heresy-era suspicions and biases against supernatural and psykers). That being said, the brotherhood that is instilled in the Space Marines through their training and shared combat experiences holds a strong sway over their actions. They overcome their suspicions, but only to a certain degree. Readers are left wonder if perseverance and unshakeable faith in the Emperor will win out in the end?

The performance is a little uneven – I like the narrator’s sub-patrician accent and voice, and I do hope they hire him to do more narration. Unfortunately, however, and unsurprisingly, certain things didn’t work quite as well – “howls of frustration”, “roars” of rage and battle-strain just don’t sound realistic. The dialogue veers perilously into the melodramatic-over-emotion arena, which sadly weakened the story’s impact for me. It’s a pity, as the ‘text’ is pretty good. The Madness Within is an interesting look at the place of and suspicions surrounding those who are warp-touched, even in the case of sanctioned psykers and librarians among the Emperor’s finest and most fervent warriors.

Nevertheless, despite my quibbles about certain performance issues, this is a good audio-drama, and one that should appeal to fans of Space Marines, WH40k in general, and other Black Library fiction.