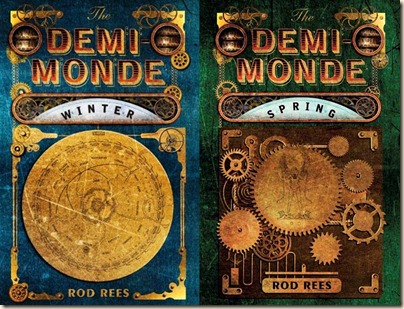 Rod Rees is the author of The Demi-Monde series – currently standing at two novels, Winter and Spring (published by Quercus in the UK and William Morrow in the US). With the release of the second novel in the series, I thought it a good time to invite him to talk about his influences and inspirations…

It’s an interesting question: what are the influences and inspirations that inform The Demi-Monde series of books, and it’s one I’ve never really thought about before.

But before I answer the question, maybe I should give a quick synopsis of what the Demi-monde is. It’s a virtual world, designed by the US army to train grunts in the art of urban guerrilla warfare, inhabited by thirty million digital duplicates of real people (none of them aware they are Dupes), who live in five city-states locked in eternal civil war (“the last thing we want is peace breaking out in the Demi-Monde”). It’s planned to be a dystopia so every city-state is overcrowded; linguistically, religiously and ethnically distinct; and led by a coterie of the über-psychopaths from history who, during their lives, visited such misery on humanity. Everything has been done to turn the DM into a living hell.

So what were the inspirations I drew on when designing the world?

I’ve got a lot of mileage both in terms of age and air-miles. I lived in Tehran during the final days of the Shah, I was in Moscow when Communism crumbled and I’ve worked in Nigeria, Somalia, Burundi and several other of the more mal-managed, mal-nourished and mal-f***ed countries of the world so I’ve seen and experienced chaos at first hand. Walking through the streets of Lagos at night informs you in a very visceral way about how dangerous the world can be. These are the experiences I drew on when I was planning my five city-states.

And, to paraphrase Steely Dan, the more I’ve travelled, as the facts unravelled, I found this to be true… that all Men are created equal in their duplicity and their ability to say one thing and do another. And this rather cynical view of life has informed The Demi-Monde series: in the Demi-Monde, nothing is as it’s billed and no one is quite who they seem. My Demi-Mondians are natural-born schizophrenics with a built-in proclivity towards betrayal.

I love cinema, and as I came to writing as a complete novice (no writing courses for Rod!) my reference point when I was constructing my books was largely cinematic. I write by imagining each chapter (each scene) as it would play on a movie screen (that’s why, I suppose, I don’t have a lot of time for long descriptive passages). This I find is very useful when I’m trying to get the pace of my books right: imagining your prose being played out in a cinema is a great way of understanding when the plot/action/whatever is dragging and that it’s time to get the editing scissors out.

Funnily enough I’m not a great fan of The Matrix, which is the usual cinematic reference cited regarding the Demi-Monde. My top five films are (and it’s no co-incidence that there are two by Kubrick on it):

- Some Like It Hot – perfect in every way: not one line of dialogue is wasted, the plotting is flawless, the acting superb and Marilyn is … Marilyn.

- Dr Strangelove – the film that made me realise that those in power have feet of clay. Satire at its very best.

- High Noon – best theme tune of all time, and the story of how a good man is betrayed I found heart-rending.

- The Prestige – Chris Nolan’s finest, the film eclipsing the very ordinary book it was based on.

While I was a great reader of SF/Fantasy when I was younger, most of the stuff I read today is for research. That said, the books I’ve read that left an impression and whose DNA is present in The Demi-Monde are:

- To Your Scattered Bodies Go by Philip Jose Farmer – Farmer populated his RiverWorld with characters from history and I’ve done the same with the Demi-Monde.

- Foundation by Isaac Asimov (most noticeable in Book 2 of the Demi-Monde) – I was fascinated by Asimov’s concept of psychohistory. One of my characters in the second DM book (‘The Demi-Monde: Spring) is similarly intrigued by the consideration as to whether human existence is Determinate or InDeterminate.

- Man in a High Castle by Philip K. Dick – A brilliant twisting of history to create an alternate ‘Now’ was inspirational in developing my own out-of-kilter ‘Real World’.

- 1984 by George Orwell – The benchmark for all dystopian worlds. The exploration of belief systems such as UnFunDaMentalism, HerEticalism and ImPuritanism in the DM was inspired by Orwell’s reinterpretation of Communism.

- Flashman by George MacDonald Fraser – A Victorian setting and the same sort of irreverent humour (I hope).

I have a built-in suspicion of belief systems, be they religions, political philosophies, social conventions or whatever… Especially when criticising such beliefs is censured (or should that be censored?). The Demi-Monde gave me a chance to take a look at them and to poke a little fun, a little like Private Eye does! One of the major themes of the Demi-Monde is absurdity. The religions of the Demi-Monde are merely the religions and political movements (for instance fascism, paganism, hedonism, communism, feminism, the gay scene, and environmentalism) seen in our world stretched and distorted to breaking point. Now it might seem to some readers that all I was intent on doing was taking the piss but this is not the case. I believe that only by showing a belief system in extremis is it possible to see it as it really is... reductio ad absurdum.

It seems to me that every religious and political creed eventually becomes just a ridiculous pastiche of what it was originally, but by then its followers (and the guys at the top making money out of it) have invested so much emotional and intellectual capital in it that they are unable (and unwilling!) to see it for the nonsense it has become. This is the Emperor’s New Clothes Syndrome and why all religions and political systems ultimately end in tears: they collapse under the weight of their own absurdity.

Satire is the way in which a belief system is stress tested and why it is so essential that a society is open, free of censorship and one in which everything can be freely criticised. I continually remind myself that the original ‘Le Demi-Monde’ was a play by Alexander Dumas satirising French society: I like to think that perhaps in some small way my Demi-Monde continues this tradition.

Jonathan Swift said that ‘satire is a sort of glass, wherein beholders do generally discover everybody’s face but their own’. My hope is that readers see themselves reflected in the Demi-Monde and that this gives them pause – just for a moment – for thought.

The Demi Monde: Winter and Spring are available now. Check back on May 23rd for an interview with Rod Rees.