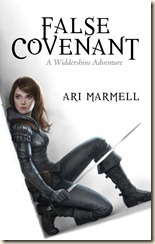 It’s over half a year since the brutal murder of Archbishop William de Laurent during his pilgrimage to the Galicien city of Davillon. During that time, the Church of the Hallowed Pact has assigned a new bishop to the city — but it has also made its displeasure at the death of its clergyman quite clear. Davillon’s economy has suffered beneath the weight of the Church’s displeasure. Much of the populace — angry at the clergy — has turned away from the Church hierarchy, choosing private worship or small, independent shrines. And the bishop, concerned for his new position and angry at the people of Davillon, plans to do something about it.

But a supernatural threat is stalking the night-time streets, come to infiltrate the seedier streets of Davillon, to intertwine its tendrils through the lower echelons of society. Faced with both political upheaval and a supernatural threat to its citizenry, the local representatives of the Church are paralyzed and the Guardsmen are in over their heads.

Into this mix, you have to add Widdershins, the hero of Thief’s Covenant, gifted member of the Finders Guild, and sole worshipper of the god Olgun. This second Widdershins adventure maintains the fun and excellent pacing of the first, and shows that Marmell has the ability to write for younger readers and adults with equal skill. This novel, while not perfect, was a lot of fun and showcases Marmell’s gift for writing the sinister side of fantasy as well as the fun side.

Widdershins has tried, and failed, to stay out of trouble since she took over her friend Genevieve’s tavern, The Flippant Witch. The tavern is seriously struggling with the economic backlash that came in the wake of the Archbishop’s assassination, and our heroine, not having a clue about how to run a business, is attempting to keep things afloat by supplementing the business’s income with thieving on the side. Which gets her into many shades of trouble. Her reputation with both the Church and the city Guard leaves her trusted by neither, and she has to conceal her less-legitimate activities more than ever before. The novel opens with one of these activities, as she cases an aristocrat’s home. As she executes her plan, though, the heist gets unexpectedly, unfortunately over-crowded.

Someone called Evrard seems intent on causing problems for Widdershins, while enigmatically not telling anyone who he really is. His presence is linked to a certain scuffle Widdershins got herself into during the previous book, so I won’t spoil that for people who haven’t read it yet. Needless to say, he plays a key part in the solution to the bigger threat hovering over Davillon. And that threat is something supernatural and very sinister, stalking the streets of the city, frightening the populace. At first, it appears as if it’s just something giving people a scare. But then, events escalate and people start dying. In large numbers, and in horrible manner. Nobody is safe – rich or poor, young or old. As the atrocities mount, connections are made, and Widdershins finds herself squarely in everybody’s sights once again, as her secretive manner and connection to William de Laurent’s death make everyone suspicious of her.

I must admit, False Covenant was not as immediately grabbing as Thief’s Covenant. True, it would have been difficult for Marmell to come up with an opening scene to rival that of the previous Widdershins novel (it involves a detailed, brutal massacre). In this novel, however, I thought the voice just wasn’t quite as consistent as in the first book. I thought this rather strange. There were a few too many clunky qualifying statements, or segues, or extra comments in parentheses. I could also have done without the kiddie-“swearing”, too: “Oh, goose feathers” and “How by all the happy hopping horses”...? This was especially frustrating, because I’m pretty sure someone actually swore properly, and what’s wrong with “crap” and “damn”? That being said, “Oh, figs” had an endearing quality to it, as Marmell utilised it at rather amusing moments. This was a very unexpected issue to find, actually, as it’s the first time I’ve really been confronted by something written by this author that I didn’t like. That being said, it didn’t ruin the book – it’s not frequent, but it was very noticeable for me, and stood out.

The rest of the writing is very tight and the novel rattles along at a fair clip. In addition, there is a good, light humour to the novel sprinkled in between the dark and sinister moments (which are superb) that adds to how much fun the novel is. It’s not laugh-out-loud, but I certainly found myself chuckling a number of times.

“Julien, we have been through this, you know.”

Marmell’s true skill, however, is in writing the sinister, darker moments (such as those with the supernatural menace) – he has a wonderful sense for the creepy and horrific, and some of the scenes in the novel are really very creepy. The primary antagonist (Widdershins has a habit of collecting minor ones along the way, too) is genuinely horrific, and quite brilliantly conceived and brought to life on the page. The action scenes are pretty good, too, although a couple of them seemed longer than absolutely necessary.

Overall, despite the slight inconsistencies with voice, this is another strong instalment to this new YA fantasy series. Fans of the first book will definitely lap this up, as well they should – it’s fun and populated by endearing and engaging characters. The ending is bittersweet, but promises more to come. If you’re after something quick, fun and lighter than some of the Big Book Fantasies out there, then this series is perfect. Definitely recommended.

I really must catch up with the other two novels of his I have (The Warlord’s Legacy and The Goblin Corps).

Posted by Civilian Reader at 3:40 AM