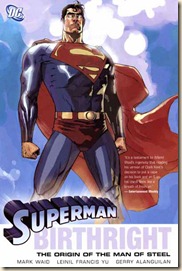 The Origin of the Man of Steel

Since his debut in 1938 Superman has become one of the most recognisable fictional characters in existence. Now, prepare for a fresh take on Superman... Imagine Superman comics were beginning again and you could read the first adventures of the Man of Steel – but reinvented from top to bottom to reflect today’s world and today’s sensibilities.

As can be expected from Mark Waid, this is a superb modern re-telling of the Superman origin story. It’s thoughtful, thought-provoking, endearing, funny and also quite sad. Certainly one of the best Superman origin stories I’ve read, I thoroughly enjoyed this.

At the start of the story, Clark Kent is travelling the world, trying to find himself. He’s working as a freelance journalist, and has been able to snag some truly amazing opportunities (not having to play for flights and travel expenses certainly gives him a leg-up on the competition…). This is, in effect, the super-hero equivalent of the semester abroad or Gap Year. 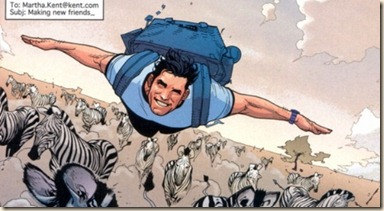 However, his travels have not been all joy and wide-eyed discovery. Because of who he is, and what he can do, he is experiencing all of the difficulties of a true outsider. His emotions about this are nicely conveyed, and he doesn’t come across as overly emo.

“Each time I think I’ve made a connection with someone, once they find out what I can do, whether its hours or days later, everything changes. Invariably they freak. They get retroactively paranoid, wondering what else Clark Kent is hiding from them. So I keep my distance. I report on events rather than get directly involved, and frankly, I’m getting disturbingly good at it... there’s got to be a way for me to USE my abilities and yet not feel totally isolated by them...”

I won’t go over the minutiae of the story, as much of this people will probably know. What really makes this book stand out, is what Waid chooses to focus on – and that is, alongside the sense of loneliness mentioned above, are the themes of responsibly, and also the generally sad state of human nature. For example, there is a moment when Clark saves the lives of everyone in an African village, but not a politician, and at the funeral he’s asked, “Why couldn’t you have stopped this?” After all he just did, saving the village and all of Kobe’s people, and uncovering the people behind Kobe’s assassination, it still wasn’t enough.

Unlike Superman: Earth One, Clark here is more ready to embrace a dual identity. He’s almost hungry for it, after his travels. Jonathan Kent is struggling with it, feeling inadequate as a father. Martha's rather enjoying it, though. It’s quite nice to see how Waid’s written the family dynamic, and how they deal with Clark’s decision to use his powers for good, rather than purely in secret and hidden. And the thought that went into designing his outfit and also his disguise.

“If I want people to trust me, they’ll have to be able to see my face.”

There’s a new, as-far-as-I’m-aware-original take on Clark and Lex Luthor’s history back in Smallville, which I thought was really interesting – we see Clark as effectively a good-natured nerd, and Lex the volatile, over-confident genius who doesn’t fit in, whose arrogance escalates to a deadly level when an experiment goes wrong. Later, when Superman comes out of the super-hero closet, Lex turns his sites squarely onto the new hero – Lex, you see, has been using his vast intellect and resources to study some Kryptonian artifacts. Lex actually knows more about Clark’s heritage than he does, which was another interesting development. I also liked that Clark wasn’t immune to some more-human emotions, like anger: 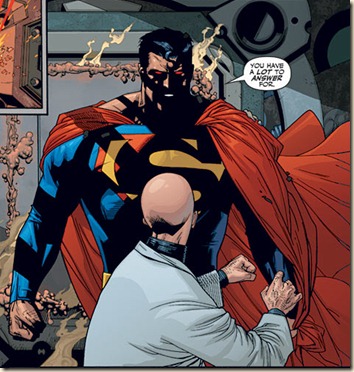 Yu’s artwork is interesting – it’s clear, certainly, but there are some strange colour decisions and techniques. It is, for the most part, eye-catching and serves the characters and story very well, but it is also inconsistent. 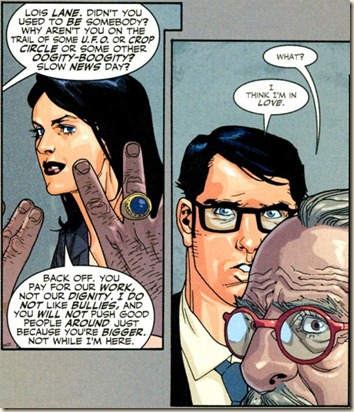 Waid’s love for, and knowledge of, the Superman mythos definitely comes through, and it adds a wonderful level of depth and empathy to the story. Waid’s writing is perfectly complemented and enhanced by Yu’s artwork – despite the occasionally strange panel.

Overall, this is a superb, substantial graphic novel (given its length, I’m surprised it’s not more than $19.99). There a great deal of story in here, which balances nuance, humour, and an intelligent examination of human nature and responsibility. 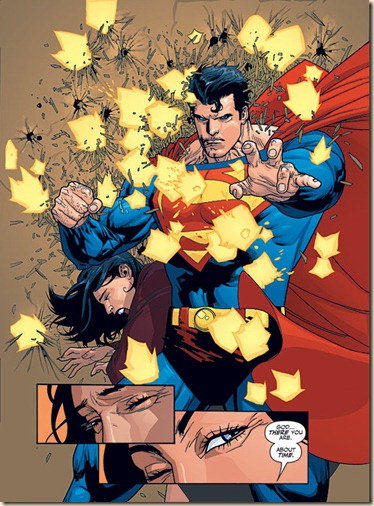