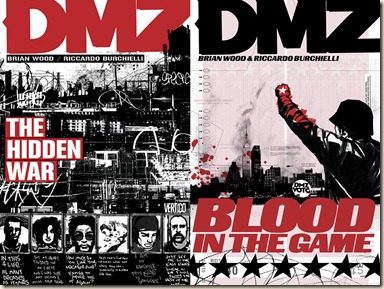 These two volumes in DMZ, fast-becoming my favourite series, add yet more detail and flavour to this Manhattan, its denizens, culture and politics. The second book also suggests that big things are in the works for the DMZ, and Matty and Co’s lives are never going to be the same. Absolutely superb.

The world and characters of the DMZ are expanded and enriched in this volume as Matty Roth turns his attention to several locals — a guerrilla artist, a former ally who's now worse off than a homeless person, the powerful head of an organization within the DMZ and more…

This book is made up of six individual stories, focussing on different individuals in the DMZ – some have crossed paths with Matty Roth before, others are entirely new.

In “DECADE LATER”, a guerrilla graffiti artist with a very long-term-view of his work, struggles to complete his masterpiece before the world catches up with him and crashes down on his head. In “AMINA”, we catch up with the intended-suicide bomber Matty saved in Volume #3, and we see how much her life has got worse since she was saved. “WILSON” tells the story of Matty’s Chinese friend, who most definitely is a Triad member, and here we get the story of how he took full advantage of the confusion and chaos that arose at the start of the war. “KELLY” is the story of the sad, tragic end of someone who couldn’t take life in the DMZ anymore, after making a dark, cold and calculating decision. In “RANDOM FIRE”, we learn of the still-existing underground club scene, and focuses on a popular DJ whose gig is taken away by a Japanese celebrity host who may have an ulterior motive – one that could prove deadly to the DMZ’s ravers. The story wasn’t what I was expecting, adding another facet to this Manhattan that I had never considered before. It’s very cool. The final story, “SOAMES”, was a little weird – it follows a wannabe defector from the Free States, who has to survive crossing the DMZ to a US checkpoint. It is strange, to say the least – he battles his way across Manhattan, is wounded, and starts to hallucinate. I wasn’t entirely sure what to make of it.

If I’m honest, this isn’t the best collection of issues in the series, but it is still very good – we take a break from the main storyline (which is probably my the root of my issues with it, given how much I love Matty’s story), and Wood introduces us to some of the Manhattanites eking out an existence on the island. It’s great storytelling – moving, poignant, sad and thought-provoking – and provides readers with a little extra depth to an already-well-rounded world.

This volume involves the rise of a possible new leader in the DMZ and what it could mean for Matty Roth, a journalist calling the zone home.

The intro, by excellent BBC politician-bothering-muckraking-journalist Greg Palast, is the first for the series to spend the whole time discussing the book itself, and not the person writing the intro (well done and thank you, sir!). It’s a great summary and review of the book and series as a whole, and captures why DMZ resonates with readers. “This is a brilliant news report from inside America’s skull dreaming into the future. A future closer than you think.”

Our hero, Matty Roth, is a “half-asses but earnest journalist... whose need to voice the story of the voiceless is at war with his reasonable cowardice.” His reporting and rhetoric continues to echo that of the Afghanistan and Iraq Wars, as well as the War on Terror. This volume appears to draw inspiration from America’s attempts to fast-track democracy after its Middle East misadventures – while welcome, it is going to be a dirty, ugly and bloody road.

“The remarkable thing, as fucked up and fractured as this country is, it’s still not so far gone that it’s giving up on the notion it’s a democracy. The cynical part of me thinks it’s all an act, but who knows? There are a lot of ideas being floated recently, on how to fix things, how to end the war. But so far, just ideas.”

In this new political environment, Matty has ideologically fallen for a Manhattan local, Parco Delgado, who has decided to run for DMZ office in the proposed provisional government. At the start, Delgado was excluded from the ballot, but after the popular uprising in support of him, things start taking off. Matty’s celebrity leads Delgado to seek him out and take him on as a type of consultant and press officer, which doesn’t always go down well. Both of Matty’s parents get involved in the election in different ways, which only confuses and frustrates Matty even further.

Roth has gone native in his two years in the DMZ, and has become a New Yorker (like many transplants to the city, he fell hard). He has become attached to a protective of his adopted city, and he’ll do anything to keep it safe and help it to rise up once again.

Blood in the Game shows how all politics is local, even in an embattled DMZ, and that to attempt to impose outside leaders or ideals on an embattled society is folly. As it turns out, the most revolutionary thing you could do in the DMZ... Is vote.

It’s an interesting story with a different pace to previous volumes, and I liked the extra politics involved. Once again, this is a superb instalment to the series. I can’t wait to find out what happens next.

You’re probably getting bored of me saying it, but this is an essential comic series – intelligent, thoughtful, thought-provoking, and visually arresting. Very highly recommended.

Posted by Civilian Reader at 6:20 PM