“Scourge of the Betrayer” by Jeff Salyards (Night Shade) 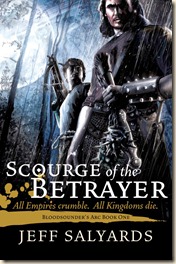 Many tales are told of the Syldoon Empire and its fearsome soldiers, who are known throughout the world for their treachery and atrocities. Some say that the Syldoon eat virgins and babies – or perhaps their own mothers.

Arkamondos, a bookish young scribe, suspects that the Syldoon’s dire reputation may have grown in the retelling, but he’s about to find out for himself. Hired to chronicle the exploits of a band of rugged Syldoon warriors, Arki finds himself both frightened and fascinated by the men’s enigmatic leader, Captain Braylar Killcoin. A secretive, mercurial figure haunted by the memories of those he’s killed with his deadly flail, Braylar has already disposed of at least one impertinent scribe... and Arki might be next. Archiving the mundane doings of millers and merchants was tedious, but at least it was safe. As Arki heads off on a mysterious mission into parts unknown, in the company of the coarse, bloody-minded Syldoon, he is promised a chance to finally record an historic adventure well worth the telling, but first he must survive the experience.

In his debut, Jeff Salyards gives us an intimate look at the lives of the soldiers who operate on the frontlines of an insurgent conflict. We are taken into the midst of a company of Syldoon soldiers, and presented with a very human tale of the repercussions of extended warfare. I had very high expectations for Scourge of the Betrayer, and I’m glad to say that it exceeded them.

Salyards introduces us to the main characters of his novel through a great tavern scene. The retinue has arrived at a town to restock and recuperate. Their new chronicler (the narrator of the story) has joined them only recently, and some of the company are less than happy with his presence. He is hired for his curiosity and skill, but his efforts to discover more of Braylar’s plans are unsuccessful, and he is bluntly put back in his place each time he attempts to learn more. At one point, Braylar explains clearly what Arki’s job is:

“I’m not certain I should like you, Arkamondos… but I can’t seem to help myself. Still, we should reestablish something here. I didn’t solicit you because you’re the most sublime scribe, and I didn’t hire you because you’re the most lyrical; the bargain was struck because you reputedly miss nothing… So… miss nothing. Record everything. No matter how contrary or nonsensical it might seem to you at the time. Digressions, tangents, observations. All of it.”

All Arki has to go on is a cryptic comment from the Captain:

“The empire is made up of countless factions, large and small. And we are always conspiring against each other. So every emperor knows that it’s not a question of if a coup will happen, but when.”

The banter and interactions between the company are excellent, very realistic (if a bit loutish). Or, as Arki describes it, the Syldoon “breed of camaraderie was crude, coarse, callous, and whatever other alliterative pejorative I could summon”. The way the characters are written was superb, and even though this is the first in the series, the characters were so well-realised that I felt like I knew the characters already.

Arkamondos (“Arki” to his friends and companions) is utterly out of his depth, and his confusion and ignorance infuses the first half of the story, as he traipses along behind Braylar and stumbles through the new and sometimes-dangerous situations he finds himself in. Arki’s thoughts on his experiences are pretty great, unvarnished impressions of warfare. For example, after a battle:

“I’ve never known such terror nor witnessed such carnage. I was split in twain, one half morbidly fascinated and disgusted by such violence and waste of life, the other celebrating that I’d survived, and glad it was me sitting there in my sweat and stink, still breathing, and not lying in a heap at the back of the wagon like a bloody bundle of meat.”

Arki is quite naïve – a strange character trait, given his profession, as I would have expected him to learn of human nature, especially, during his years chronicling the deeds of greedy and prideful merchants and aristocrats...

There’s something strange going on with Captain Braylar – there is an otherness about him and his connection with the terrible flail he wields with exceptional, deadly skill. He mutters to himself. There is something very sinister about his weapon, and we are left for quite some time before discovering some of the truth about it. In fact, the unrushed approach to exposition and world building is one of the strengths of this novel and Salyards’s story – the novel throws us straight into the story, giving us only the information we need to follow along. Arki’s lack of information and knowledge colours our perspective of the Syldoon and the world at large. Given all they go through together, Arki is unable to maintain the objectivity of a chronicler. He says about Captain Braylar,

“For a taciturn man so gifted in bloodletting, he had the ability to be remarkably glib and charming. At least in short bursts.”

Scourge of the Betrayer is, in some way, the fantasy equivalent of the embedded reporter, and taps into the mentality of the observer and his inability to maintain objectivity when he’s living, fighting and surviving alongside the company. We share in their camaraderie, their combat, their squabbles and, eventually, their losses. There are a few great poignant and moving scenes towards the end of the novel.

The prose and story drew me on, and I found myself reading very quickly (very unusual for a debut fantasy) – I was hooked on the writing and characters’ stories from the beginning. That being said, given that it’s not a very long novel in the first place, I thought Salyards maybe, on occasion, spent a little too much time giving us the full picture – of a battle, or of a new city the company have entered, for example. It was all well presented, of course, but I did sometimes find myself wondering what we were waiting for – Braylar drops some great hints early on, but then details of their mission move to the backburner for longer than I would have preferred.

The story builds to a good reveal of the Syldoon’s real mission and agenda, the execution of which leads to plenty of well-done battle scenes.

Overall, I would say this is a strong debut, but one that does suffer from just a couple of the niggles debuts often suffer. Behind that, though, is a great writing talent, with a gift for writing engaging prose. Salyards has also done a great job of giving each character his or her own distinctive voice – it was never difficult to remember who you were reading about, as each member of the company had their own vocal mannerism and patter. Excellent characterisation.

In this gripping military fantasy debut, Salyards explores the intricacies of Empire politics, and the impact it has on the soldiers who must fight for and against it and the observers who get caught in the middle of the conflict. I eagerly await his next book. Definitely recommended.

Posted by Civilian Reader at 2:08 AM