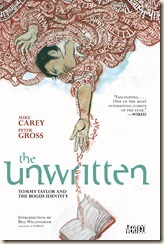 Tom Taylor’s life was screwed from the word go. His father created the mega-popular Tommy Taylor boy-wizard fantasy novels. But dad modelled the fictional epic so closely to Tom that fans constantly compare him to his counterpart, turning him into a lame, Z-level celebrity. When a scandal hints that Tom might really be the boy-wizard made flesh, Tom comes into contact with a mysterious, deadly group that’s secretly kept tabs on him all his life. Now, to protect his life and discover the truth behind his origins, Tom will travel the world, to all the places in world history where fictions have shaped reality.

I knew nothing about this series before I picked up this book. My local comic store was having a decent sale for graphic novels, so I decided to try something new. Given the amount of praise that has been heaped on The Unwritten (much of it printed on the front and back covers of this book), I figured I was on to a good thing. I was not wrong – after a start that wasn’t encouraging, this took off into directions I hadn’t expected and that were inspired, original, and absolutely gripping.

This series, to begin with, seems to tap into the frenzy o  fandom that has been generated by mega-selling fantasy series like Harry Potter (mentioned in here), and also Twilight and The Hunger Games. The story then takes things a couple of steps further: What if the most popular fantasy series, and its main character, were real?

I had a bit of a knee-jerk sceptical reaction to the series. This is because, to begin with, the transparent similarities between the Tommy Taylor stories and world with that of the Harry Potter series made me wonder why this was considered so good. I couldn’t see where Fables author Bill Willingham was coming from in his gushing introduction. But then, when the story gets going properly (before the end of the first chapter, I should state), and we come to know Tom Taylor and also some of what’s really going on, we start to see the originality and genuinely inspired story come to the fore. The creators are playing around with so many things – so many literary and fan-based tropes are thrown into the hopper, mixed in with plenty of original and unexpected creations.

There are plenty of weird things going on in the first chapter, which largely just sets the scene for us – Tommy Taylor is a hugely popular fictional character, supposedly based on Tom Taylor, the son of best-selling and reclusive author Wilson Taylor. Tom basically makes a living off appearances at fan conventions and so forth – he’s locked out of his father’s fortune, so he can’t just disappear himself. He’s also looking for any excuse to distance himself from his father’s creation.

Tom, with the help of an unexpected ally, goes to his father’s house in Switzerland, in the hope of uncovering the mystery of his father’s disappearance and also his work. As Tom looks into the disappearance of his father, he is shadowed by a sinister force intent also on finding Wilson Taylor and uncovering his secrets. It’s a superb close to this opening act of The Unwritten, and it left me absolutely hungry to read more of the series. Thankfully, the next four book are already available, with the sixth coming out in the next couple of months.

The final chapter of the book is a slightly-separate, very interesting and well-done retelling of Rudyard Kipling’s story, weaving into it some of Carey’s Unwritten mythology, and shows how Kipling was linked to some of the characters either shown or hinted at in the comic’s story, and then how he’s linked to Wilson Taylor. I thought it was fascinating and expertly done.

The Unwritten is a must for fans of Fables and other literary-influenced entertainment and media. It’s also a must for anyone with an interest in story-telling. This is really very good. Once I started, I couldn’t put it down, and devoured the book in one sitting. I’ll definitely be reading more of this in the future. Absolutely superb.

Posted by Civilian Reader at 7:18 PM