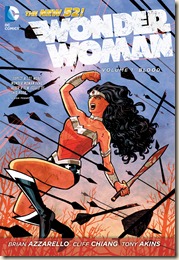 Hippolyta, queen of the Amazons, has kept a secret from her daughter all her life – and when Wonder Woman learns who her father is, her life will shatter like brittle clay. The only one more shocked than Diana by this revelation? Bloodthirsty Hera – so why is her sinister daughter, Strife, so eager for the truth to be told?

I took a gamble with this one. I’ve never read anything related purely to Wonder Woman (and only a few issues of Justice League), so have no history with the character. I’ve also not read much of Azzarello’s stuff – in fact, I’ve only read the first issue of Spaceman, which I thought was... well, not good. So, I figured I might be on safer ground here (I’ve also picked up volume one of 100 Bullets, which I’ll review pretty soon). Thankfully, I was not disappointed with this book, and I rather enjoyed it. 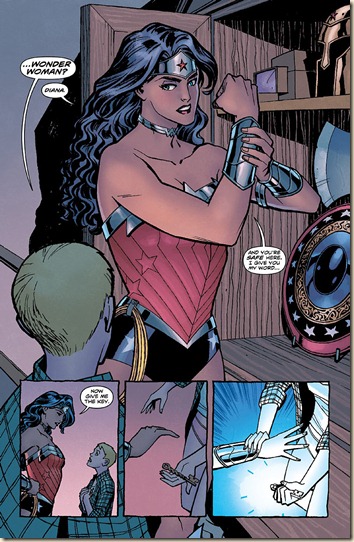 To be honest, this is a pretty strange comic. Part of this feeling is, of course, related to my lack of familiarity, but it’s weird in a pretty great way. There are a lot of connections with and content about the Greek gods, which I really liked, and once the details of who Wonder Woman is are dealt with, we discover that the eternally philandering Zeus has disappeared. This has left a power vacuum, and while some of the lesser gods and demi-gods just want to be left alone and keep on living and working as they always have, some are starting to make a play for the throne. Hera, Zeus’s eternally patient wife, has decided she wants the throne, as well as to rid the world of Zeus’s plentiful bastards. Wonder Woman and her companions – Zora, one of Zeus’s most recent conquests – who Diana saves at the beginning of the series; Hermes, messenger of the Gods and recently wounded while saving Zora; and the mysterious Lennox (who appears out of nowhere and is accepted by the group rather quickly, I thought). 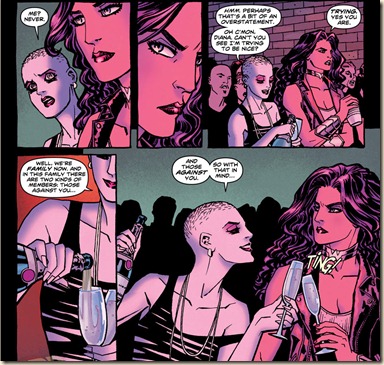 Wonder Woman’s antagonists are an interesting bunch, also. There’s Hera, of course, but also the mysteriously-affiliated Strife – Diana’s half-sister and all-round trouble-maker (who has a pretty severe, intriguing goth-look). There are the gods as well, of course, and I really like the way Chiang’s realised them – they’re all very distinctive, interesting and originally interpretations. Poseidon, for example, looks like he’s inspired by a Studio Gibli creation: 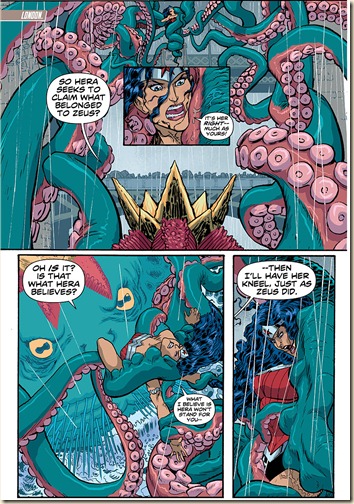 I’m glad I waited for the collected edition with this series – I’m not entirely sure if it would have passed the Three Issue Test. The first three chapters of the book are interesting, but for this new reader, not entirely gripping. I liked the artwork, certainly, as well as the Amazon culture we spent a lot of time with, and the writing is pretty strong. That being said, it didn’t really start firing on all cylinders for me until the story starts developing a bit more, and Wonder Woman and company start getting involved with the divine machinations. Therefore, given how many of the New 52 I was reading, I’m not sure this wouldn’t have stood up on a month-by-month basis.

However, as a collected story, this is excellent, and I’ll definitely be picking up volume two, when it becomes available. I’m very glad I took a chance on this series – it’s very different to what I was expecting and other New 52 series I’ve been reading, very original and highly imaginative. I’d love to know where it’s going next. 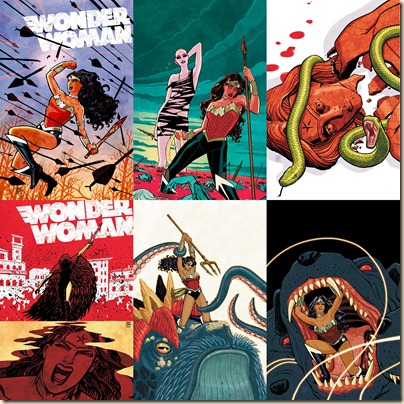