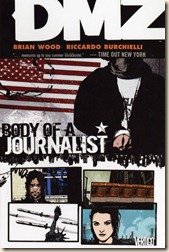 Roth’s star power lands the break of a lifetime: an interview with the infamous leaders of the Free Armies.

In the second volume of DMZ, Wood and Co. have created yet another superb graphic novel. A little bit of time has passed, but Matty is still working and living in Manhattan, and has managed to make a life and a name for himself among the population of the DMZ.

The more I read of this series, the more I love it, and the more I am convinced that everyone with an interest in graphic novels, politics, and excellent story-telling has to read it: it’s intelligent, thought-provoking, visually interesting, and engaging throughout.

It’s now summer in New York City. The Killing Season. The time of year when tensions rise, people go crazy, and clean water is scarce. Matty also catches “the bug” – an undefined illness that sticks around for much of the book, but is just something “everyone gets it”, and he’ll just have to stick it out.

Matty is invited to the Free Army outpost (the Lincoln Tunnel, which he briefly visited at the end of Volume 1, when chasing down a punk who stole his Press Vest), and sees that the journalist he came to Manhattan with, Viktor Ferguson, is actually alive and in relatively good health. The Free Army quickly kick him out, though, and the US Army comes to pick him up. Strangely, they bring his father. Matty agrees to work for them, and they resupply him with a bunch of new stuff and technology. When he gets back to Manhattan, he has a paranoid skit, and tosses out almost everything – including the meds that are supposed to cure the bug.

As the situation quickly spiral out of control, Matty has to do everything he can to stop an invasion, but events just keep getting away from him, until help arrives from an unexpected quarter. The book finishes on a real shocking moment, and I was so eager to read more that I went out and bought books three and four (a combined review is on its way).

There are some really great moments in this book. One that really stood out for me is when someone else looks at the photos Matty has taken in the DMZ – the panels are superb, providing grim images of violence and battle’s aftermath; or haunting, showing victims of violence, or struggling survivors. The artist has a great eye for evocative imagery, and Woods’s text is really brought to life. It’s an immersive style, that makes this a visually powerful story.

We also get some more background, and some history of the conflict (which I thought was very welcome) – readers will learn of how it was effectively a grassroots movement, which grew from a general sense of being fed up and ignored by the power elite, who were too busy with overseas adventures and inside-the-Beltway bullshit, until they just couldn’t take it anymore:

“Save for the DMZ, this war’s fought in bits and pieces all over the country. The Free States are an idea, not a geographic entity. The same asymmetrical insurgent warfare that bogged down the U.S. Military overseas is happening here. Five years later and no one knows what the hell anyone really stands for anymore. It’s just a survival thing now.”

The book also includes two extra features. The first is “ZEE NYC”, an extra issue-length story, which looks at Zee’s story – her experiences in the days leading up to, during, and after the war began. I really enjoyed it, and thought it added more depth to a key character (she’s helped Matty since day one, basically), and provides yet more background for the story and this ‘reality’. It’s drawn by a different artist – Kristian Donaldson – and is very good, but also quite different and distinct from Burchielli’s work. I really enjoyed the style – it has some similar to Burchielli’s, but is much cleaner and sharper, with perhaps just a slighty Manga-influence thrown in for good measure? I wouldn’t mind seeing more of Kristian Donaldson’s work – either connected to DMZ or any another title.

The second additional feature is “NEW YORK TIMES” – a few pages supposedly put together by Matty, in the style of Time Out New York, or the Lonely Planet Guide to the city. It includes lots of insider details and comments about the neighbourhoods, some of the people, and also drops some hints of events to come in future volumes of the series. I thought it was a really cool addition – the artwork is similar to that of the cover designs, which were mostly (if not all – I’m not actually sure about this) done by Brian Wood. 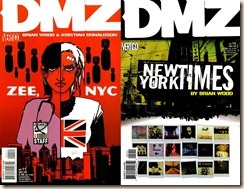 This is another absolutely fantastic book. Expect to see reviews of all of the DMZ collections (the series has now finished) over the next few months, whenever I can manage, and assuming I can afford to keep buying them.

[I am currently considering putting a stop to buying single issues just so I can complete my collection of this series – it’s that good.]

Posted by Civilian Reader at 3:44 AM