“The 500” by Matthew Quirk (Headline/Little Brown) 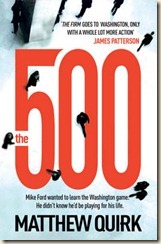 The darker side of Washington, DC, lobbying

Mike Ford was following his father into a life of crime, when he chose to go straight and instead worked his way through Harvard Law School. Now he’s landed the ultimate job with the Davies Group, a powerful political consulting firm run by the charismatic Henry Davies. Rubbing shoulders with Washington’s heavyweights and with more money and privileges than he’s ever imagined, Mike believes that everything has finally come right.

But he’s about to discover that power comes with a price. Henry Davies is looking for a protégé for a crucial deal and one that must go right no matter what. Mike soon learns that being on the side of the lawmakers doesn’t mean your work is legal. And there’s no place for a moral code when you’re on the devil’s payroll.

I stumbled across this book rather by accident, while hunting around for political thrillers. Luckily, it’s very good, so I’m very glad that I did. The novel takes a look at the seamier side of lobbying culture, adds in a dash of conspiracy theory, some international criminals, and plenty of action. It’s very enjoyable.

One thing I should mention at the outset, is that I’m not sure I liked the Prologue – it seemed to give a lot of the game away, thereby sapping some of the later events of their emotional impact. Nevertheless, it does give the reader some anticipation of “How does he get to here?” My initial reservations, however, did not prevent me from thoroughly enjoying the novel, and Quirk still managing to throw up a fair few surprises.

The novel starts with Mike still at Harvard, working like a dog on two degrees, with a part-time job bartending. He’s struggling to maintain the job and his school-work, he has scarily-large mounting student loans, and he’s on the hook for his mother’s $83k in outstanding medical fees from her unsuccessful cancer care. All except the latter make this quite the typical lower-income-made-it-to-the-Ivy-League survival story. While at an invitation-only seminar, he is spotted by Henry Davies, an extremely powerful Washington lobbyist, who offers him a job, thereby solving all of his money problems. It’s a dream come true. Until things start taking a turn for the dark.

Mike is something of a thriller archetype – he’s a recovering youthful transgressor. His father’s a crook, but Mike has decided he wants to live more-or-less legitimately, doing everything by the book. Until a particular make-or-break assignment comes along, and Mike goes… well, let’s just say the “extra mile” would be an understatement. What makes the novel and character different, though, is that his job is pure cynicism and political graft. We go along with him as he gets sucked into the wonderful world of lobbying, learning how to finesse clients and opponents, and the importance of “M.I.C.E.”.

The 500 doesn’t paint a nice picture of Washington politics and culture at all. The seamier side is on full display, exaggerated (I hope) somewhat for artistic effect. There are Congressmen getting into awkward and compromising positions, scandalised nuns in Statuary Hall, and plenty of spying and one-up-manship. I’m not sure if it’s Quirk’s or just his character’s cynicism creeping through, but members of Congress are painted in a particularly unflattering light – just “walking hairdos”, who need to be ushered hither and thither by socially awkward former debate-nerds (to paraphrase one particular examination). Washington is described as a “brothel of a city”, one “run by crooks”. Certainly, the story helps to reinforce this impression, as Mike’s work at the Davies group is all about leverage, influence-peddling and, of course, money. Lots and lots of money.

Overall, this is a break-neck-paced political thriller. As mentioned, it has a relentlessly negative portrayal of Washington, D.C., culture. But, it is meant to be entertainment, and political conspiracy and graft, mixed in with some murder and a well-done love story, are classic tropes of the thriller genre. The 500 fits perfectly within the genre, and should appeal to all fans of political thrillers, as well as political junkies. There are a lot of insider details (Quirk has been covering Washington for The Atlantic for years), and a few amusing moments and cynical observations to lighten the mood.

The 500 takes readers on a journey through the corridors of power, to the crack dens of Washington and gives us an intimate tour of the corrupt underbelly of American politics. Definitely recommended, this is a very fine thriller debut.