It’s done the rounds around the biblio-net, but I really wanted to share the cover for Brent Weeks’s next novel, The Blinding Knife, on here as well. I love Weeks’s novels – his Night Angel trilogy was one of the first fantasy trilogies I reviewed on the blog, it’s prequel novella was superb, and The Black Prism (book one in this latest series) I thought was also superb, with a pretty great, original magic system to boot. 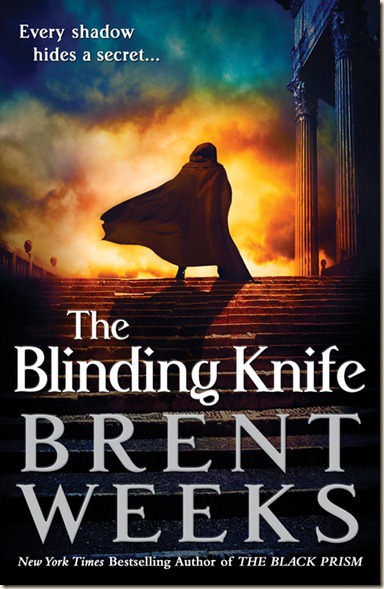 Isn’t it awesome? Certainly eye-catching, and I like the colours in the sky, and the fact that it has a semi-Roman aesthetic. I don’t really know why. It’s probably the columns. I like columns. (*Cough* Uh, paging Dr. Freud…). Massive kudos to Lauren Panepinto & the Orbit art team who worked on this.

The Blinding Knife will be published by Orbit in September 2012.

The synopsis is below. [after the break. Warning: Contains a major spoiler for The Black Prism]:

He’d thought he had five years left – now he’s got less than one. With fifty thousand refugees, a bastard son and an ex-fiancée who may have learned his darkest secret, Gavin’s got problems on every side. As he loses control of his magic, all magic is running wild, threatening to destroy the Seven Satrapies. The old gods are being reborn. Their army of color wights is unstoppable, and the only salvation may be the brother whose freedom and life Gavin stole sixteen years ago.