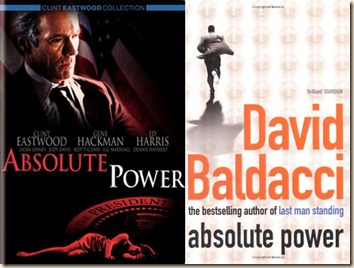 In this adaptation of David Baldacci’s debut thriller, Clint Eastwood makes a good attempt to bring the novel to life on screen, however the story does not ultimately lend itself to the restrictions imposed by Hollywood.

Absolute Power is a great story. Published just before the Clinton-Lewinski scandal exploded in the US media (though not before numerous rumours surrounding President Clinton), the novel explored an “unthinkable” abuse of power and criminal conspiracy – that of a murder involving the US President and a cover-up orchestrated by members of said president’s staff. After a tryst goes very wrong, Chief of Staff and the Secret Service help sanitise the crime-scene and destroy evidence. Unknown to the President and his lackeys, one unlikely witness saw everything – trapped behind a two-way mirror in the country house in Maryland belonging to a major supporter of the President, Luther Whitney, a professional burglar, witnesses the whole event. He escapes, and is then hunted by those who helped cover-up the murder.

My main concern with the movie was that it took so long to get going. The murder scene in question was overlong, and really didn’t need to be. Events then escalated rather rapidly, without much chance to get to know the characters or properly understand their motivations. That being said, it’s very well acted, by a stellar cast: Ed Harris is great as police Detective Seth Frank; Clint Eastwood is pretty good as Luther Whitney; Laura Linney is great as Luther’s daughter, Kate; Scott Glenn and Dennis Haysbert are cold and sinister as the president’s two protectors in the Secret Service; and Gene Hackman plays a suitably arrogant and in-denial president.

One interesting thing I noticed is that Penny Johnson, who plays Seth Frank’s (underused) partner would later play the wife of President Palmer in 24, played by Dennis Haysbert, who (as mentioned above) is on the president’s secret service detail in Absolute Power. What a small Hollywood world...

Speaking of 24, I wonder if this novel would have made a better single-season TV series, instead of a movie – this would have given the director and screenwriters the space they needed to properly convey the story from page-to-screen. It would have been impossible to get the same cast, I imagine, but it’s something I thought about while watching the movie.

The acting is extremely strong. The direction is good, not overly complex or artsy, with a very sparse soundtrack (sometimes unsettlingly quiet), but the plot moves perhaps a little too slowly for the big screen. I imagine the novel is superb, and the extra “space” the author will have enjoyed in the book are lacking on screen. There was a point when I paused to get a snack and noticed I was about 3/4 through, when I thought I’d only be in first half. Nothing had really happened, yet. The investigation takes a couple of leaps, without really explaining or showing how or why they got to the point they did. The dénouement is disappointing in its brevity.

(Absolute Power is one of Baldacci’s novels that I never got around to reading, for some reason – I’ve bought it for Kindle, though, so I hope to get to it soon as a ‘Latecomer’ review.)

Posted by Civilian Reader at 3:06 PM