DC Comics has been wielding its Axe of Cancellation once again, with a slew of titles getting dropped. First up, announced a couple months ago, will be the sixteenth and final issues this month from Blue Beetle, Grifter, Frankenstein Agent of S.H.A.D.E., and Legion Lost.

According to CBR, it’s not surprising that Blue Beetle and Grifter have been dropped, given that they “are definitely the lowest-selling books in the New 52”. It is a pity, however, as I rather enjoyed Grifter. Blue Beetle is a series I’ve been meaning to read, but I’ve decided to wait for the second and final collected edition to be released, and then I’ll maybe do a double review or something. I’ll probably do the same for Frankenstein Agent of S.H.A.D.E.

Of the latest four cancellations to be announced, I really like two and have mixed feelings about another (the fourth I haven’t read and have no interest in doing so): I, Vampire and Paul Cornell’s Saucer Country (actually published through Vertigo) are the two I will be sad to see go. Both of them are superb, I thought, and I don’t understand why they haven’t been garnering enough interest to keep them alive. The former is a dark, beautifully illustrated horror comic, and the latter is an innovative, gripping mash-up of alien abduction lore and American presidential politics. Who wouldn’t like those? 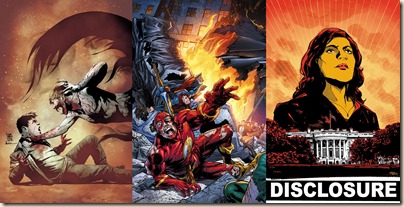 DC Universe Present is a bit of a mixed bag: I enjoyed the first story-line from this variety series (featuring Deadman), but really didn’t enjoy the second story-line (Challengers of the Unknown). I’ve been keeping an eye on the recent story-lines and featured characters, and it actually looks quite good. I’ll pick up the final volume. The all-ages series Superman Family Adventures will also come to an end, but I don’t have any interest in reading that. These series will cease with their April 2013 issues.

Posted by Civilian Reader at 4:15 PM