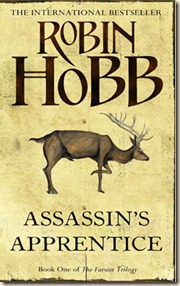 Young Fitz is the bastard son of the noble Prince Chivalry, raised in the shadow of the royal court by his father’s gruff stableman. He is treated like an outcast by all the royalty except the devious King Shrewd, who has him secretly tutored in the arts of the assassin. For in Fitz’s blood runs the magic Skill – and the darker knowledge of a child raised with the stable hounds and rejected by his family. As barbarous raiders ravage the coasts, Fitz is growing to manhood. Soon he will face his first dangerous, soul-shattering mission. And though some regard him as a threat to the throne, he may just be the key to the survival of the kingdom.

I bought Assassin’s Apprentice for my Kindle quite a while ago. But, whenever I’ve thought about reading the first book in Hobb’s Farseer trilogy, I have been distracted by some newer, shinier book. After reading the first chapter at work last year (I was allowed! It was for work!), I finally got on with it, and started reading it properly. What I found left me cold and unimpressed. In the end, after a particularly bad chapter, I had to quit. In the end, I only managed to read the first 20% of the novel.

If I didn’t finish the book, how can I justify reviewing it? Well, think of this more as a disappointed grumble, or a sad lament, rather than a scathing review. While Hobb’s prose is really good to begin with – I thought the first chapter was sometimes quite lyrical, actually, and really grabbed my attention – things just got rapidly worse the more I read. I never found myself gripped or enthralled by the story, and the only character that elicited even a modicum of emotion was a puppy. Whose part in the novel is not lengthy…

Perhaps because I have read so many novels by authors who cite Hobb as an inspiration, Assassin’s Apprentice felt derivative and slightly boring: A bastard son, delivered to the royal seat. Nobody knows what to do with him. He grows up with the “common folk”. He’s a little odd, with some strange and forbidden talents. He goes through a training montage. Then the King takes notice of him. He gets better rooms. He’s to be trained as a member of the slightly-less-common-folk. Truncated training/settling in montage. Oh, but then, he is to become an assassin! How exciting. Then there’s some Drama. And then I stopped reading.

Perhaps the early mention of a “Lord and Lady of Withywoods” should have been my first indication that this may not exactly be my cup of tea. It was rather twee, I thought, but decided to press on nevertheless. But the whole novel is on the twee side. Yes, Hobb’s prose is precise and well-crafted throughout, but this may be one of the first novels that could not be saved by being well-written. The naming convention is simplistic and just grated. There is a slightly archaic detachment to the style, as well as the language (though, nothing compared to the silliness I found in a Katherine Kerr novel I dipped in to last year). It made it difficult to really get stuck into the story.

Moving on. We are treated (after a whole raft of waffle) to this rather excellent explanation of what Fitz is going to learn from Chade, the King’s current master assassin:

“It’s murder, more or less. Killing people. The fine art of diplomatic assassination. Or blinding, or deafening. Or a weakening of the limbs, or a paralysis or a debilitating cough or impotency. Or early senility, or insanity or… but it doesn’t matter. It’s all been my trade. And it will be yours, if you agree. Just know, from the beginning, that I’m going to be teaching you how to kill people. For your king. Not in the showy way Hod is teaching you, not on the battlefield where others see and cheer you on. No. I’ll be teaching you the nasty, furtive, polite ways to kill people. You’ll either develop a taste for it, or not. That isn’t something I’m in charge of. But I’ll make sure you know how. And I’ll make sure of one other thing, for that was the stipulation I made with King Shrewd: that you know what you are learning, as I never did when I was your age. So. I’m to teach you to be an assassin. Is that all right with you, boy?”

This is followed shortly thereafter by perhaps the most irritating “montage” paragraph of Fitz’s training:

“In spring of that year, I treated the wine cups of a visiting delegation from the Bingtown traders so that they became much more intoxicated than they had intended. Later that same month, I concealed one puppet from a visiting puppeteer’s troupe, so that he had to present the Incidence of the Matching Cups, a light-hearted little folk tale instead of the lengthy historical drama he had planned for the evening. At the High-Summer Feast, I added a certain herb to a serving-girl’s afternoon pot of tea, so that she and three of her friends were stricken with loose bowels and could not wait the tables that night. In the autumn I tied a thread around the fetlock of a visiting noble’s horse, to give the animal a temporary limp that convinced the noble to remain at Buckkeep two days longer than he had planned.”

What delightful whimsy…! It doesn’t take a genius to see that they are all tests, but apparently Fitz was unclear about this.

If that wasn’t bad enough, I then came upon the Melodrama people had mentioned. Some people on Twitter told me that they accepted that “the melodrama doesn’t work for everyone”… When is melodrama ever accepted in a novel that isn’t farce? Anyway, irrespective of that, Fitz’s mood veers from a prim-and-proper detachment (“I grew to look forward to my dark-time encounters with Chade”) to Melodrama.

At one point, Fitz once again exhibits an utter lack of common sense of intelligence. He refuses to lift something from the King’s bedchamber, after ordered to by Chade explains:

“What are you saying, boy? That I’m asking you to betray your king? Don’t be an idiot. This is just a simple little test, my way of measuring you and showing Shrewd himself what you’ve learned, and you balk at it. And try to cover your cowardice by prattling about loyalty. Boy, you shame me. I thought you had more backbone than this, or I’d never have begun teaching you.”

A fine, if stiffly-written response from the teacher, and one that should be obvious to all intelligent would-be-assassins-in-training. Then Chade brusquely dismisses Fitz, and…

“Chade!” I began in horror. His words had left me reeling. He pulled away from me, and I felt my small world rocking around me as his voice went on coldly. … Never had Chade spoken to me so. I could not recall that he had even raised his voice to me. I stared, almost without comprehension, at the thin pock-scarred arm that protruded from the sleeve of his robe, at the long finger that pointed so disdainfully toward the door and the stairs. As I rose, I felt physically sick. I reeled, and had to catch hold of a chair as I passed. But I went, doing as he told me, unable to think of anything else to do. Chade, who had become the central pillar of my world, who had made me believe I was something of value, was taking it all away. Not just his approval, but our time together, my sense that I was going to be something in my lifetime.

True, this is not the most melodramatic moment I’ve ever read, but it did not bode well, and when added to everything else, I just couldn’t go on.

From what I read, and I recognise that it was only the first fifth of the novel (more than 100 pages), I sadly found nothing to make this book stand out, and certainly nothing to explain why it is so beloved of so very many fantasy fans and authors. I’ve read much, much better novels, especially from contemporary fantasy authors – and I’m not talking about the “grimdark” authors, either (which I think I can safely say write more to my tastes): Kate Elliott, Patrick Rothfuss, Helen Lowe, Scott Lynch, Amanda Downum, and even Elspeth Cooper (whose debut was a tad shaky at points)* have all done this sort of fantasy better. And the sub-genre of Fantasy Assassins? Brent Weeks’s superb Night Angel Trilogy and Jon Sprunk’s Shadow trilogy (which I really need to finish) do this so much better. Because, you know, they didn’t feel like they were written in the tone of The Famous Five Muck About In A Castle… With Swords. Hell, I think I’ve read better fantasy from some of Black Library’s lesser writers.

So, tell me: What did I miss with Assassin’s Apprentice? It’s rare that a book that is loved by the fan-base at large falls utterly flat for me. Is it just a nostalgia thing? Should I try to read this again?

* Don’t get me started on Gair’s sudden, miraculous magical proficiency…