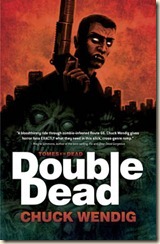 A vampire wakes up after a zombie plague. What to eat?

Coburn’s been dead now for close to a century, but seeing as how he’s a vampire and all, it doesn’t much bother him. Or at least it didn’t, not until he awoke from a forced five-year slumber to discover that most of human civilization was now dead – but not dead like him, oh no.

See, Coburn likes blood. The rest of the walking dead, they like flesh. He’s smart. Them, not so much. But they outnumber his by about a million to one. And the clotted blood of the walking dead cannot sustain him. Now he’s starving. And on the run. And more pissed-off than a bee-stung rattlesnake. The vampire not only has to find human survivors (with their sweet, sweet blood), but now he has to transition from predator to protector – after all, a man has to look after his food supply.

I’ve never been much taken with the zombie apocalypse genre. There just doesn’t really seem like there’s very much one can actually do with it that hasn’t been done in film, fiction and comics many time before. Then along comes Double Dead, proving that the zombie apocalypse genre has plenty of life left in it. Wendig makes genre tropes his own, as well as adding a great, original twist. After all, in a world populated predominantly by zombies, what does a vampire have to do to get a meal?

Double Dead strips away any and all of the romanticism of vampires. Coburn is a player, only a dead one who’s after your blood rather than your virtue. He’s unsympathetic to human plight, he’s not altruistic, he doesn’t sparkle in the light. He’s selfish, aggressive, and most of all he’s hungry. The unfortunate band of survivors he stumbles across are easy prey. But then the mysterious daughter makes Coburn an offer that is very difficult to refuse: become their shepherd, protect them and they'll show him where to get food – picking on the worst elements of the leftovers of humanity; the cannibals and other scum who prey on the desperate few survivors.

Wendig gleefully plays around with a number of classic zombie-apocalypse tropes, and many readers will also be able to detect a hint of The Walking Dead in here. Nevertheless, the author manages to make it feel very fresh and original and wholly his own. And it’s not only because he introduced a vampire to the setting (which really made the novel for me), although this does mean that seemingly familiar scenes or plot devices are turned rather nicely on their heads. Double Dead is a novel that fits comfortably in the sub-genre, but offers something more for readers to make this stand out.

Double Dead is slightly absurdist at times, with a somewhat gonzo-feel to the prose: visceral, it pulls back the curtain on all that is negative about humanity - greed, cowardice and selfishness. It's cynical, sarcastic, brutally honest. “Fear & Loathing in Zombieland” would be one way of describing certain chapters in the novel. Some scenes and passages have the feel of a young and angry Hunter S. Thompson collaborating with George Romero to write a zombie-apocalypse novel. While maybe listening to Carcass... It’s not perfect, and lacks some subtlety and nuance, but for a debut novel this is very well written and composed. Sometimes the gory bits feel a little relentless, or over-long for my admittedly more-conservative tastes, but it’s still a pretty fun romp through a zombie-infested post-societal America.

“I figure the end of the world just ripped off humanity’s mask, and now the true face of mankind is out there grinning like a mad skull in the moonlight.” (58)

For the most part, Wendig’s negative portrayal of human nature works, but there are the occasional passages or scenes that seem just a little too negative. However, because of Wendig’s brisk prose style, things move on at a near-breakneck pace, and any minor flaws are quickly forgotten as the motley group of survivalists make their trip to the promised safety in the West.

After a slightly par-for-the-course middle third, things get interesting again in Part 3, as Coburn’s flock get into a little (more) trouble, and we discover a bit more of what constitutes politics in this dystopia. Can’t give too much away, but I have a feeling Mr Wendig does not like the Insane Clown Posse. Or perhaps does, and offers up a weird, twisted homage to the bizarre rap crew. There’s tons of action in the final third of the novel, as almost everything comes to an explosive and bloody conclusion. There’s tragedy, there’s hope, there’s a little bit of redemption, as Coburn’s continued exposure to Kayla and her post-apocalypse family leads him to develop feelings of attachment that are utterly alien to and uncomfortable for him.

Double Dead won’t be for everyone – it’s gruesome and very graphic, especially when it involves cannibals: Ambrosia, a particularly loathsome cannibal Coburn confronts, is the most horrific character in the entire novel (perhaps even the most horrific I’ve ever read), and events surrounding her almost made my gorge rise. Some scenes were outside my comfort zone – ‘disgusting’ is one word, but it does fit the genre, and I have read worse. It’s shocking, but also very well written (which makes it even more gross). This is the only novel in Abaddon Books’ Tome of the Dead series that I’ve read, so I’m not sure if this is the norm, but if you like gribbly horror, then this should suit fine.

One thing is for certain: Chuck Wendig is a very talented writer. His prose style pulled me along throughout – it’s fast-paced, cynical and very tightly crafted. It doesn’t always work, but he has a real gift. He will undoubtedly become a force in genre fiction, and I can’t wait to see what else he comes up with. I will eagerly read anything he puts out there (I’ve already bought one of his non-fiction works, Confessions of a Freelance Penmonkey).

The feel-bad zombie novel of the year, with a hint of redemption? Probably. Go read it.

Posted by Civilian Reader at 7:34 AM