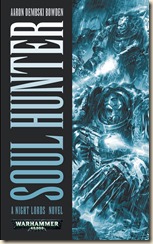 Terror and Chaos in the 41st Millennium

The Night Lords form an uneasy allegiance with the Black Legion in order to assault the valuable planet of Crythe Primus. The Imperial world puts up a stern defence, but the biggest obstacle to success will be the disunity and mistrust between the two Traitor Legions.

Will their covenant last long enough for them to succeed in their mission?

This is the first novel by Dembski-Bowden that introduces us to the 10th Company of the Night Lords – a struggling Traitor Legion, specialists in terror-tactics and instilling fear in the enemy, the consummate trained killers. It is a tragic legion, coming to terms with the corruption that is spreading throughout its ranks, as more of their – already dwindling – numbers embrace the Chaos powers. Soul Hunter centres around First Claw (squad) of the 10th Company, informally led by Talos, an Astartes stubbornly holding on to the ideals set down by their Primarch back in the founding years of his Legion. He has to navigate not only the battlefields to which he is dispatched, the politics and alliances between Traitor Legions, and also the lack of trust within the Night Lords’ ranks.

What I like most about Aaron Dembski-Bowden’s (ADB) novels, and his portrayal of the Warhammer 40,000 universe, is that he manages to create multiple layers to the story, taking it far beyond what many would consider standard fare for “tie-in” fiction.

The main characters of Soul Hunter (and also, in fact, the peripheral characters) are a lot more complex and fully-realised than one would find in a lot of other science-fiction novels. The Night Lords, despite their anti-Imperial allegiance, are not just ravening beasts pledged to Chaos. True, a couple of them actually are, but they’re not cartoons, and ADB is able to keep the characters believable throughout the novel.

In Soul Hunter, we get a look into the life and trials of this Traitor Legion, its fast-dwindling forces and archaic wargear, the logistical and infrastructure struggles they face without the vast resources of the Imperium or the Black Legion (the nominal ‘leader’ Traitor Legion, formed from the ashes of the Sons of Horus). The author never goes into too much detail, maintaining the narrative flow, but I thought it was an interesting addition to the narrative and the reader’s understanding of the Traitor Legions, and especially helps explain much of what Talos feels and thinks about his mission and purpose in the galaxy. Talos remains mostly sane, save the gene curse he shares with his Primarch, that of prophetic visions. Squad-mate Uzas, on the other hand – a transplant from another, depleted company – seems to have given in to battle addiction, and is quite uncontrollable when in combat, quite literally becoming a slavering butcher.

There is tension within the dwindling ranks of the 10th Company, between Talos’s squad (no doubt others, too) who cling to a masterless ethos, and those in the Legion who have succumbed (even if only a little) to Chaos. The tension is palpable between Talos and the Exalted, formerly Captain Vandred of the 10th Company, now... something else. The Exalted is an interesting character; in part because it’s not entirely clear what he is – Dembski-Bowden did address this in a post on his website, which mentions that the Exalted’s nature will be explained in greater detail in the second book in the series, Blood Reaver (published May 2011). The Exalted is the exact opposite of Talos: he is impure, mutated almost beyond recognition, simpering in his attempts to attract the attention of the new Warmaster, Abaddon the Despoiler, manipulative of his own forces, yet fearful of the forces that are changing him (physically & spiritually).

This is the second novel I’ve read of ADB’s, as well as a couple of short stories, and each time I read his work, I come away very impressed. The author manages to include a smattering of dark humour throughout the novel, and the dialogue and interactions between the Astartes and their brother warriors or, in the case of Talos, with his slaves, is brilliantly written. The rivalries and fragile alliances binding the Traitor Legions together are detailed, and it quickly becomes clear just how damaged the Night Lords are as a Legion – they lack a unifying leader, they are spread far and wide, and more and more of their number are succumbing to the enticements of Chaos. As a fan of the Horus Heresy series, Soul Hunter offered some great new material to telescope forward until 10,000 years after Horus’s defeat and more detail of the Night Lords’ part in the Heresy.

Dembski-Bowden manages to humanise Talos, despite the obvious distance he has from the human race, and the loyalty he engenders in his slaves Septimus and Octavia is entirely believable. The novel is often written from the two slaves’ perspectives, adding another viewpoint of the Night Lord’s mission and tragic descent – Octavia’s recent capture allows for Septimus to fill in some background for the reader, and this too is done very skilfully.

The author’s battle scenes are equally well-scripted: they are never over-long, always sparsely explained and quick. It never feels like violence for the sake of violence, which can sometimes be the case in Black Library novels, and always moves the story along – giving us deeper insight into the characters of, specifically, the members of First Claw and also the Exalted (who excels at void-war, and allows for a very good space-battle sequence that was genuinely gripping).

Delving into the vast wealth of lore and background information that Games Workshop has released over the decades, ADB has brought the Night Lords alive on the page, fully-realised, complex and tragic. If Blood Reaver continues the quality I’ve seen in Soul Hunter and The First Heretic, then fans of the books will be in for another absolute treat.

Anyone who’s read my reviews of ADB’s short fiction and The First Heretic will know just how much I enjoy his writing, but he really is damn good. Many of the same themes run through his novels – loss, disenchantment, betrayal, and the personal struggles of his protagonists. Dare I say it, but I think Aaron Dembski-Bowden is well on his way to becoming Black Library’s best author. If you haven’t read his work yet, then you’re missing out. To repeat a comment from my review of The First Heretic, I would still love to see what he can do outside of the Warhammer 40,000 setting.

Superbly written, utterly gripping, this is sci-fi writing at its very best. A must for all fans of Warhammer 40,000, Soul Hunter will also appeal to newcomers to the universe and sci-fi fans as a whole.

Posted by Civilian Reader at 10:28 PM