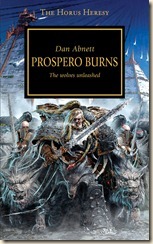 The Emperor is enraged. Primarch Magnus the Red of the Thousand Sons Legion has made a terrible mistake that endangers the very safety of Terra. With no other choice, the Emperor charges Leman Russ, Primarch of the Space Wolves, with the apprehension of his brother from the Thousand Sons home world of Prospero.

This planet of sorcerers will not be easy to overcome, but Russ and his Space Wolves are not easily deterred. With wrath in his heart, Russ is determined to bring Magnus to justice and bring about the fall of Prospero.

Picking up the story of A Thousand Sons from a different perspective, Prospero Burns is the long-awaited Space Wolves novel from one of Black Library’s most established and defining authors. Needless to say, the wait has been more than worth it – this is a superb sci-fi war novel written with depth, intelligence, and considerable panache.

What continues to amaze me about Mr Abnett is the breadth of his writing ability – whether it is a Horus Heresy novel, a Gaunt’s Ghosts novel, a Warhammer fantasy novel, or something entirely of his own creation (e.g., Triumff): the most consistent trait is that it is always of extremely high quality. Each of his Horus Heresy novels (Horus Rising, Legion, and now this novel) feels different from the last but is always engaging, interesting, utterly addictive, and invariably raises the bar yet again for both the series and also the quality of (oft-maligned) tie-in fiction as a whole. He also has a tendency to expand the Warhammer 40,000 lexicon, adding ever-more phraseology that will be used in many future novels by other authors.

To begin with, I wasn’t sure how Abnett was going to make the first chapter relevant to the plot synopsis. It was certainly interesting, because it added another great layer to our understanding of the century and a half following the start of the Wars of Unification; as well as a good account of what life on Fenris is like for non-Space Wolves. Apart from a single, fleeting mention of the Thousand Sons, however, there was no connection to what I was expecting the novel to be about.

Hawser, an Imperial archaeologist, is assimilated by the Space Wolves after he arrives (well, crashes) on Fenris. He is adopted as an oral historian (skjald), and his position is to record, remember and regale Legion actions. The majority of the novel is from his perspective (another aspect that makes this a very different Horus Heresy novel). The attention Abnett pays to Hawser’s pre-Fenris life, and its importance to the story, slowly becomes apparent as he builds the readers familiarity and relationship with Hawser and a handful of Space Wolves.

Abnett’s gift for atmospheric description is evident throughout the novel: Norse and sagaic influences come through in the dream-like passages in the first quarter of the novel, as Hawser struggles to survive the harsh Fenrisian environment. The author’s treatment of the Space Wolves is superb, also: they are a very different ‘loyalist’ legion to what we’re used to reading about. They are paganistic, ritualistic and much rougher around the (blade-)edges. Their manner is one of sublime brutality. The Fang, or “Aett” as they call it, is a Stygian fortress from an outsider’s nightmare, brilliant realised on the page. One would be forgiven for thinking the Wolves and not the Thousand Sons would be most likely to fall: a simplistic description could see this as a gang of brutal thugs being sent after scholar-sages. Abnett does a superb job of bringing the Space Wolves to life in the novel, showing us their distinct blend of proud, martial bearing and barbarian savagery through our glimpses into their traditions and rituals.

The Space Wolves are a dark Legion, there’s no doubt about it – by their own admission and acceptance, they were created to be the Emperor’s executioners. When Hawser comes before the Jarl currently in charge at the Fang, he is told:

“Life and death. That’s what we’re about, Upplander... Life and death, and the place where they meet up. That place, that’s where we do business. That’s the space we inhabit.”

Abnett offers other outside opinions of the Wolves, further deepening our understanding of their reputation, and also adding depth to the novel. An Imperial Guard soldier recounts fighting alongside the Space Wolves, suggesting the Emperor had “gone too far... and made things he should not have made”:

“They were animals, those things that fought with us... They killed everything, and destroyed everything and, worst of all, they took great relish in the apocalypse they had brought down upon their foe. They just left a sick taste in the mouth as if, by calling on their help, we had somehow demeaned ourselves in an effort to win.”

He has come to the Space Wolves to learn about them, to learn about their history and their ways, and much of the first three-quarters of the novel is about Hawser’s getting to know his hosts and protectors. They want to help him understand the Legion – that yes, they are brutish killing machines, but also so much more.

“Their reputation helped. No one expected brutes who looked like ritual-obsessed, bestial clansmen to be underpinned by peerless combat intelligence.”

This desire to be understood comes through most clearly when Hawser is invited to observe a Space Wolf captain’s dealing with arrogant and prickly (though still afraid) human commanders, and he explains why it’s important that an outside chronicler sees him – and by extension, the Space Wolves – follow the rules of war:

“We are known for our ferocity. We are thought to be feral and undisciplined. Even brother legions consider us to be wild and bestial... But if that was our natural state, we’d all be dead by now... It takes a vast amount of self-control to be this dangerous.”

As the chronicler gets to know the Wolves, the reader quickly understands why Abnett gave us such a long intro about the lives of native Fenrisians, the harsh eternal-winter environment and what it means: “That means learning about survival. About killing.”

“The Wolves liked to wrap themselves in a cloak of mystery and solemn, supernatural power, but such nonsense was the superstitious talk, of barbarians, inherited from the Fenrisians they drew their strength from.”

There is another, key element to Prospero Burns – that of the importance of knowledge. Hawser, as a conservator of knowledge, both ancient and contemporary, has built a life and career around knowing and understanding the universe and its inhabitants. There is a poignant irony that such a man is accepted into the Space Wolf community, only for the Legion to be unleashed on their most knowledge-obsessed brother-Legion. The flashbacks to Hawser’s archaeological career are also important, as they include a good deal of discussion about the importance of discovering, preserving, and understanding knowledge of the past.

Prospero Burns was not the novel I was expecting. The majority of the book is not actually about Prospero, the Thousand Sons and the Emperor’s sanction of Magnus the Red at all, really. Rather, it is an account of the Space Wolves – their psychology, their traditions and manner, the roots and ironies of their reputation and purpose. When the story does bring us finally to the Council of Nikaea and the Space Wolves siege of Prospero, we get more layers added to the story started in A Thousand Sons, and a look at what went on behind-the-scenes at the trial, and also meet Leman Russ – Abnett writes him brilliantly, and it’s a great characterisation of such a fearsome Primarch. Hawser’s account of the battle on Prospero is very personal as he struggles to reconcile the fact that brother has been pitted against brother, the tragic fall of one of the Emperor’s Legions, and also his first battle as a warrior.

Prospero Burns is a thoughtful and intelligent novel, with a multitude of themes running through it, as well as expanding our understanding of the time leading up to the Heresy. The novel easily maintains the quality of writing and plotting we’ve come to expect from Abnett, despite it taking just a little bit longer to get going than I usual find with his novels. As always, the author’s ability to convey atmosphere and the maelstrom of war is peerless.

Abnett has once again taken a Black Library series and contributed a work of complete originality that yet fits perfectly within the whole. His approach is unorthodox, but thanks to his prose and authorial skill, you will lose yourself in this utterly engaging story, and it will leave an impression long after you stop reading. After the slow start, Prospero Burns evolved into one of the stand-out novels in the series, once again making it clear why Abnett’s work is so beloved.

Very highly recommended, this is intelligent and gripping military science fiction at its best. I only wish it had been longer.

Breaking News! As of this writing, Prospero Burns has entered the New York Times Bestseller List at #16! This makes it the fourth Horus Heresy novel in a row to feature on the list!

[Incidentally, Dan’s next original-setting work of fiction will be released later this year: Embedded will be published by Angry Robot Books in May 2011, and is one of CR’s Most-Anticipated novels of the year.]