“The Heir of Night” by Helen Lowe (Orbit) 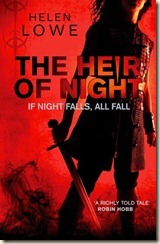 Introducing The Wall of Night

The violence of an age-old war casts a long shadow. It falls on a world where mercy is weakness and conflict is a way of life.

Young Malian is being trained to rule. Her people garrison the mountain range known as the Wall of Night against an ancient enemy, keeping a tide of shadow from the rest of their world. Malian is expected to uphold this tradition, yet she’s known little of real danger until the enemy launches a direct attack upon her fortress home.

In the darkest part of the night, the Keep of Winds becomes a bloodbath. Women and children, warriors and priests, are slain by creatures with twisted magic flowing in their veins. And as the castle wakes to chaos, Malian flees deep into the Old Keep, her life at stake. Then when the danger is greatest, her own hidden magic flares into life.

But this untapped potential is a two-edged blade. If she accepts its power, she must prepare to pay the price.

The Heir of Night is a novel filled with intrigue and dark magic, in which the conflict between duty and personal desire is constant. While the story is weighed down a bit with a somewhat ponderous magic dimension, this is a promising beginning to the Wall of Night series.

In The Heir of Night, Lowe introduces us to the Derai, a people isolated (by no means unwillingly) in treacherous mountains as they defend the world of Haarth from the Swarm, dark creatures intent on destruction. Malian is the heir to the House of Night, the most prominent of the nine houses that make up the Derai people. With the renewed aggression of the swarm, only Malian (with the help of the many ancient forces surrounding her) can hope to save her people and their world.

As is frequently the case with Chosen One narratives, the forces protecting Malian occasionally look a bit like deus ex machina, especially early on, when she is entirely dependent on the various mystical presences in her home for help. However, as the novel progresses and Malian begins to draw more on the people around her for guidance, this becomes less of an issue.

I found the magic system in the novel a little difficult to get a handle on. At an individual level, it works just fine: people with magical abilities can communicate telepathically, seek out people and things, and protect themselves and others from harm, among other things. However, the broader magical and mystical aspects of the world become a little muddled. There is a lot going on: the world has a dream dimension (into which some people can enter physically, and which in some places coincides with physical dimension), the dark enemy includes a number of quasi-physical beings, and the root of the eon-spanning conflict at the heart of the novel may involve interstellar migration, among other things. This saturation of magical elements can detract from the strengths of Lowe’s story: her characters, the depth of her setting, and her descriptive prowess.

The world of the Keep of the Winds is very well-realised. Lowe describes the Derai and their environment in rich detail, infusing even brief interactions with a sense of tradition and history. She has created a complex and extensive mythology for them, which informs even their most mundane events and interactions. The story of the Derai culture and history emerge through numerous perspectives, which Lowe balances well, moving deftly between characters, relaying information without excessive repetition, and keeping the pace of the novel moving quickly.

Lowe’s characters are varied and nuanced. I was particularly impressed by her female characters. For one thing, they are plentiful. For another, these women are not limited to the roles of daughters, wives, and mothers, nor are they expected to be so. In the House of Night, the Earl’s Steward, the Captain of his Honor Guard, and his Heir are all female, without their status ever being questioned because of their gender. Lowe has created unconventional women, fulfilling unconventional roles, and they are a pleasure (not to mention refreshing) to read. The novel is filled with strong characters, and I look forward to getting to know them all better in future novels.

While Lowe’s characters and their history and culture make for an engaging read on their own, it is the details of the world that bring the novel to life. Lowe has a gift for physical, and especially visual, description. The colours, sights, and sounds of the Keep are beautifully realised. In this incredibly xenophobic culture, outsiders stand out visually: Haimyr, the minstrel from Southern Haarth, is dressed entirely in gold, and covered in bells; Rowan Birchwood, the Earl’s mistress from the Winterlands, is a pale figure within the gloom of the Derai Keep. One of my favourite details was that of the tapestry that is also a portal to a dream realm, whose image of a hunt changes to reflect the mood and activities of the mystical hunt on the other side. Such striking visual images are present throughout the novel.

In spite of the problems with the magic system (which I hope will smooth out in future novels), The Heir of Night is a gripping read. The breadth and depth of the Derai culture, the fresh and nuanced characters, and the wealth of detail create a rich and compelling world.

Posted by Civilian Reader at 1:02 PM

Email ThisBlogThis!Share to TwitterShare to FacebookShare to Pinterest
Labels: Fantasy, Helen Lowe, Orbit, Review, The Heir Of Night, The Wall of Night