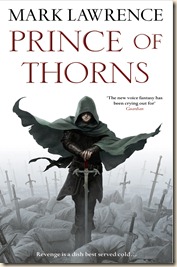 As I remarked in my review of Mazarkis Williams' The Emperor's Knife, I rarely do negative reviews. I fully support doing negative reviews, but I try and do as few of them as possible, since I’m far more interested in telling my readers about the great books that I’ve enjoyed reading. Mark Lawrence’s debut novel from last year, Prince of Thorns, unfortunately falls in the category of novels that I did not enjoy reading at all. It wasn’t as tough a read as The Emperor's Knife, but it was quite close.

Prince of Thorns is about Prince Honorus Jorg Ancrath, a young man barely into his teens, who ran away from the comfortable life of his father's palace when he saw his mother and younger brother butchered by his father’s enemies. Now the young Prince leads a band of outlaws: killing, thieving, looting, pillaging, and raping their way across the kingdom. Yet, Jorg is not satisfied with this life either and he sets his eyes on a higher goal, intending to be a king within the span of the next two or three years. And so he goes back to his father’s palace and then sets out to discover a source of power that can get him what he wants.

The biggest turn-off for me about the novel is how we are introduced to Jorg (he rarely, if ever uses his first name): he kills some villagers and then rapes two sisters as his outlaw brothers watch and participate alongside. It was a very, very uncomfortable reading experience. It was compounded by the fact that Jorg is just thirteen at this point, and his view of the world and of other people is similar to what it would be for someone much older and much more experienced. Killing people is like nothing to him. Throughout the novel, I kept coming up against this over-cynical teenager and his utter contempt for everyone around him. I just couldn't think of this as a very young teenage boy, and not someone who is at least ten years older. It just wasn’t convincing at all to me, not even if the argument is put forth that his past has caused him to miss an innocent childhood. I just can’t get into that. Needless to say, Jorg isn't going to be on my “Protagonists I Like” list any time soon.

Then there are the other characters in the novel, particularly Jorg’s allies and the people at his father’s court. Prince of Thorns has a very divisive cast. The only characters that I can say I liked to any degree would be Jorg’s father, and Princess Katherine, a visiting noble. They were both solid characters that really brightened up the dreariness of the novel and the good thing was that neither was a stereotype. There’s also the Nuban character, one of the outlaw brothers, who is at first the token “barbarian” but quickly turns into one of the most promising characters in the novel by the end. Most of Jorg’s band, though, are bland and unimpressive. They are thugs, they act like thugs. None of them, except the Nuban, stood out for me. If anything, I’d say that Jorg is George R. R. Martin’s Prince Joffrey turned up to eleven, with all shame and sense of propriety removed. And I hate Joffrey with a passion.

The world that Lawrence has created is a future version of Earth, but it’s post-apocalyptic. It’s a fantasy world of sorts, too, although there is no magic (not much of it, at any rate): no dragons, no elves, no wizards, etc. I had a hard time coming to terms with this setting since it never settled down into either category: is it really a post-apocalyptic world, or a fantasy world like Westeros or Midkemia. And the world is given the bare minimum of attention. By the time I was done with the novel, I knew precious little about the world, and how Jorg, his father and the other kingdoms all fit into it. Very disappointing.

With regards to the pacing, can’t really comment on it much other than say that it was okay. Not a particularly pacey novel, and not too slow either.

It all comes down to the fact that the characterisation of Jorg hampers any true enjoyment of the novel. Most of the bloggers and reviewers I know are absolutely taken in by the novel, so there do appear to be people who liked what Lawrence has done, but I have to say that it failed to work for me. One of the most disappointing debuts from 2011, more so since this was high on my “most-anticipated” list.

[This post is part of Abhinav’s 2012 Advent Reviews project]