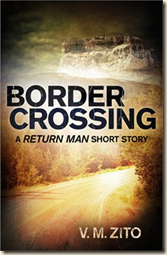 A short story intro to the world of The Return Man

Corporal Noah Brodeur’s job is a lonely one. In the aftermath of the outbreak, from his remote Canadian border station, Brodeur must guard the Slinky: a formidable wall protecting his countrymen from the Evacuated States and the ravenous creatures that roam there.

All is quiet until the day a stranger emerges from the safe side of the forest. He says he is on a classified mission for the CIA. He says his name is Special Agent Kenneth Wu. He demands that Brodeur break rank and allow him across the border into danger.

But when everything is at stake, can appearances be trusted? And on the edge of civilisation, who is more dangerous, the living… or the dead?

Border Crossing is set before the events of The Return Man. Instead of focusing on Henry Marco, the star of the novel, this short story is about a Canadian border guard, Brodeur, and tells us the story of Kheng Wu’s infiltration into the Evacuated States. The story’s pretty short, so there’s not a great deal of time to offer a ton of world-building or character development. But, as an introduction to the world, this works rather well.

Brodeur is five weeks into his rotation on the border between Canada and the Evacuated States. It’s been a pretty quiet tour, and he’s had to deal with just four corpses that got themselves caught in the expanse of razor wire that marks the border. He’s alone, and a little bored. Border duty has changed a great deal since the early days of the Resurrections: in the beginning, “as the dead tore the western U.S. to oblivion”, the Canadian army had amassed along the border, in anticipation of “an onslaught of corpses that never came”, experiencing a mere trickle of shuffling zombies instead. Brodeur only has three more weeks to go before he’s relieved, and is just marking the time. But then, one day, he sees a real, live person. And everything changes for him.

“His training at Calgary had conditioned him in one direction – protect the border into Canada, from the States, keep the dead locked away. That was Brodeur’s sole purpose here, just like Cerberus, the guard dog-monster of Hades.”

Kheng Wu, a Chinese intelligence operative, is looking for a way into the Evacuated States, and by chance he happens to pick Brodeur’s checkpoint. There is a rather good-natured detainment, during which Wu does everything he can to convince his Canadian captor that he is on a Top Secret mission for the CIA (his cover in The Return Man, too). Brodeur has his suspicions, but Wu’s a good actor. Things will probably not work out well for the guard…

During this crossing, Wu gets his first look at a returned corpse up close. It’s a good scene, and offers a pretty haunting impression of what happens when they get caught in the wire:

“The corpse, an unkempt American male, was no danger to him. It dangled, feet off the ground, strung like a ghastly marionette from the wires. The steel hooks had peeled the meat from its bones, and the metal glistened with blood… A short distance away, a cowbell had been attached to the fence, and as the corpse writhed, the bell danced. Clunk-clunk-clank… It was the first corpse Wu had seen firsthand, not images on CNN or Fox News or video from his briefing room in Beijing. Television had cushioned the effect. Now here he was, experiencing an actual encounter, and yet this empirical proof seemed somehow more like a hallucination…”

I really enjoyed the alternative perspective on this dystopian setting, and Zito does a great job of adding a little more background and context that opens up a number of new possibilities. I hope he writes at least some more short stories based in the Return Man future. There are so many possibilities and directions in which the author can take the story. And, well, I just think he’s a really good author.

There’s a moment that also offers the opportunity for some role reversal, and maybe a minor dig about the United States’ strict immigration and increasingly-fortress-like border policies:

“When the dead had risen, the U.S. had evacuated all land west of the Mississippi, splitting the former world power into two broken parts – the Evacuated States where the dead thrived, and the Safe States where the living struggled on. Canadian policy had been zero tolerance: no American refugees allowed to flee north, for fear of importing the disease. Unkind, maybe... but four years later Canada remained clean.”

Zito’s writing is tight and focused, and this is a very well-constructed short story. If you haven’t tried out The Return Man and want something short to act as a tester, then Border Crossing should suit your needs very well. I do, however, think you should definitely give the novel a try anyway – it’s really good.

Posted by Civilian Reader at 6:08 AM