I’ve been able to find the covers for the next three Horus Heresy releases, and I thought I’d share them in a single post. Each one has superb artwork, and I am of course ridiculously eager to get my mitts on the books… The Heresy series is shaping up to be one of the best epic sci-fi series available now. With the new range of Hardcovers (complete with wrap-around covers and internal art), it’s also a great time for collectors to start reading the series.

As things move into the Heresy proper, as some of the Traitor Legions embrace Chaos, things are going to get very interesting indeed…

The next Horus Heresy novel, Betrayer, is available this month (at least in eBook). Written by Black Library’s best author, Aaron Dembski-Bowden, I am ridiculously excited to read it. Here’s the complete artwork: 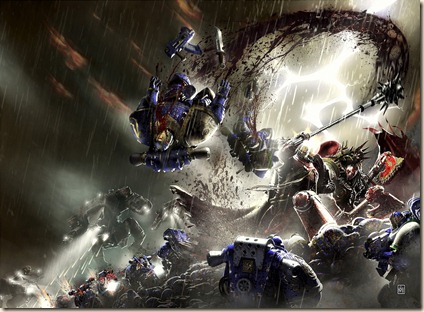 The next anthology, Mark of Calth, is edited by Laurie Goulding, will be published in August (probably earlier through Black Library’s website). The artwork is particularly gloomy and atmospheric, and features some of the surviving Ultramarines who have sought refuge in the caves of Calth (following the events of Know No Fear): 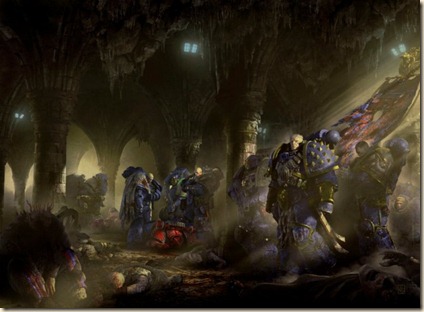 Here’s the early synopsis I was able to find:

The Heresy reached Calth without warning. In just a few hours of betrayal and bloodshed, the proud warriors of the XIIIth Legion – Guilliman’s own Ultramarines – were laid low by the treachery of their erstwhile brothers of the XVIIth. Now, as the planet is scoured by solar flares from the wounded Veridian star, the survivors must take the fight to the remaining Word Bearers and their foul allies, or face damnation in the gloomy shelters beneath the planet’s surface. The battle for Calth is far from over...

And finally, there’s the new edition of Visions of Heresy, which is a particularly awesome art and background book (published in July):

From the ashes of the Great Crusade, treachery was born. Always first among the superhuman primarchs, the newly dubbed Warmaster Horus turned his back upon the Emperor and embraced the dark powers of Chaos. With fully half the military might of the fledgling Imperium at his command, he set his sights upon the throne of Holy Terra and waged a war which would divide the galaxy forever... Visions of war, visions of darkness, of treachery and death – all of this and more is contained within this heretical volume. Iconic depictions of the Space Marine Legions and the heroes that commanded them are presented alongside artwork from renowned artists Neil Robert, as well as brand new historical notes on the Warhammer 40,000 universe by Alan Merrett. Witness the end of an era and the beginning of something far darker, as the Heresy continues to unfold.