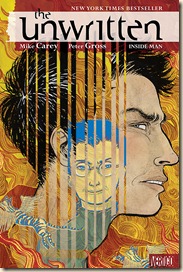 Tom arrives at Donostia prison in southern France and falls into the orbit of another story: The Song of Roland. Unfortunately for Tom, it’s an epic that ends with a massacre…

This series is going to be a real pain in the ass to review. There’s almost no way to write about it without throwing out spoilers left right and centre. Therefore, I shall keep my reviews of this and subsequent books as succinct as possible. Needless to say, this second collection continues the excellent story of Tom Taylor’s surprise, literary-fantasy quest. This is fast becoming a firm favourite of mine.

At the start, Tom Taylor has been arrested and delivered to a prison in France. The story focuses on both Tom’s experiences in the prison as well as the fate of the Prison Warden (can’t say more than that).

We also meet Savoy, a journalist who has infiltrated the prison in order to get the scoop on Tom Taylor’s arrest. We get a little bit of story in the prison, before the two of them escape, with the help of another person with connections to Tom’s father.

I really like the way the series plays with two notions: that of fandom (and obsession), and also literature-as-fantastical-reality. Certain characters are obsessed with the Tommy Taylor novels, which ultimately leads to their doom; while Tom himself is stubbornly refusing to believe a lot of what he sees because he deems it fantastical or ludicrous. There is so much going on in this story, but it does not overwhelm the reader. Rather, like all great literature, it pulls you in and refuses to let go.

The story draws parallels with that of Tommy Taylor, the character from the Harry Potter-esque books Tom’s father wrote before he disappeared; while also sprinkling the narrative with historical and literary references. Tommy’s nemesis is made flesh. Our protagonists go to an echo-version of 1930s Germany. There are Nazis. And also Goebbels, who becomes more real the more attention they pay to him. And the final chapter of the book contains the grumpiest Peter Rabbit-analog I’ve ever read (who is pretty hilarious, actually, as he continuously tells all the other anthropomorphized animals to fuck off…). This final chapter was amusing in its jarring, unorthodox wrongness.

Carey’s writing is excellent throughout, and Gross’s artwork lends itself beautifully to the story, giving the series a distinct aesthetic.

This story is, at its core, all about the power of imagination and literature.

This is a superb series, and I can’t recommend it highly enough.

Posted by Civilian Reader at 4:38 AM