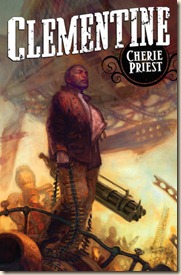 Maria Isabella Boyd’s success as a Confederate spy has made her too famous for further espionage work, and now her employment options are slim. Exiled, widowed, and on the brink of poverty…she reluctantly goes to work for the Pinkerton National Detective Agency in Chicago.

Adding insult to injury, her first big assignment is commissioned by the Union Army. In short, a federally sponsored transport dirigible is being violently pursued across the Rockies and Uncle Sam isn’t pleased. The Clementine is carrying a top secret load of military essentials — essentials which must be delivered to Louisville, Kentucky, without delay.

Intelligence suggests that the unrelenting pursuer is a runaway slave who’s been wanted by authorities on both sides of the Mason-Dixon for fifteen years. In that time, Captain Croggon Beauregard Hainey has felonied his way back and forth across the continent, leaving a trail of broken banks, stolen war machines, and illegally distributed weaponry from sea to shining sea.

And now it’s Maria’s job to go get him.

He’s dangerous quarry and she’s a dangerous woman, but when forces conspire against them both, they take a chance and form an alliance. She joins his crew, and he uses her connections. She follows his orders. He takes her advice.

And somebody, somewhere, is going to rue the day he crossed either one of them.

This is the second installment in Priest’s highly popular Clockwork Century steampunk series. Originally a limited edition novella published by Subterranean Press, Clementine has since been made available as an eBook first in the US and now in the UK. I have to admit that I while I enjoyed much of Boneshaker, the first in the series, I was never wholly won over by it. I nevertheless decided to give the rest of the series a try – especially since Tor UK picked up the rights to publish it in Blighty. Clementine does a good job of expanding Priest’s version of a steampunk Civil War-era United States. While still flawed, it is nevertheless an enjoyable book, one that kindled my interest in reading the rest of the series.

As the synopsis points out, the story follows two main characters, alternating chapters between them: the first is Croggon Beauregard Hainey, captain of the Free Crow, gun-runner and escaped slave; the second is Maria Isabella Boyd, former spy and actress, and newest employee of the Pinkerton Agency. Unlike in Boneshaker, whose characters I never felt I really got to know, Priest has done a great job of making Hainey, Boyd and other cast members realistic and quite engaging. All the more impressive given then short length of this story.

Hainey is chasing after his ship, “the one he’d stolen fair and square eight years before”, which has itself been stolen by a group of Unionists, transporting something (we are not sure early on what it is) to Louisville, Kentucky – something that could change the course of the Civil War currently raging in the United States.

“The Free Crow, which Brink had renamed the Clementine, had once been a Confederate war dirigible and she was capable of tremendous speed when piloted properly. But she’d been flying as if she were crippled and it meant one of two things: Either she was critically damaged, or she was so heavily laden that she could barely maintain a good cruising altitude.”

Hainey and his small crew have been chasing the dirigible from Seattle, and after their temporary vessel is grounded, they decide to appropriate a new Union Army vessel – one that is bigger, faster, and extremely well armed and armored.

Maria Isabella Boyd has lived an interesting, varied and action-packed life so far. Almost forty, she has landed at the Pinkerton Agency, who have hired her on as their newest agent. The Pinks, as they are known, are “strike-breakers, riot-saboteurs, and well organized thugs of the expensive sort”, their “own secret service” in the North. With her knowledge of the South and myriad other skills, she is an excellent candidate to help in the Agency’s mission, especially those jobs paid for by the Unionist government. Despite her lingering Confederate sympathies, her situation is desperate, and she can’t afford the luxury of being picky:

“She was nearly forty years old and two husbands down — one dead, one divorced — and the Confederacy had rejected her offers of further service. Twenty years of helpful secret-stealing had made her a notorious woman, entirely too well known for further espionage work; and the subsequent acting career hadn’t done anything to lower her profile… The quiet withdrawal of her military pension was further indignity, and the career prospects for a woman her age were slim and mostly unsavory.”

We join Boyd at her first meeting with Pinkerton himself, and it offers Priest a great opportunity to give readers a bit of alternate-history context about the Agency and the state of the country:

“Well maybe you haven’t heard or maybe you didn’t know I didn’t like it, but the Union threw us off a job. We were watching Lincoln, and he was fine. Nobody killed him, even though a fellow or two did try it. But this goddamned stupid Secret Service claimed priority and there you go, now he’s injured for good and out of office. Grant wouldn’t have us back, so I don’t mind telling you that I don’t mind telling them that they can go to hell. But they can pay like hell, too, and sometimes we work for them, mostly labor disputes, draft riots, and the like. And I need to know that you can keep your own sensibilities out of it.”

Her new boss is not the most sympathetic, and all business:

“Kindly refrain from getting yourself killed, lest you cause me deep aggravation and distress. Breaking in a new operative is expensive and annoying. It’ll gripe my soul if I have to replace you before you’ve done me any good.”

Boyd’s first assignment is to chase down the Clementine, and ensure that it reaches its intended destination, free of interference where possible. This means Boyd is on a collision course with Captain Hainey. When our two characters finally meet, we learn that not all is as it was meant to seem (unsurprisingly), and they form an uneasy alliance to get to the bottom of what is really going on.

One of the most obvious breaks with true history is the existence (and apparently proliferation) of dirigibles, and I think Priest has done a great job of weaving them into the narrative. I particularly liked that Priest has kept her characters hyper-aware of the dangers presented by the dirigibles: all that hydrogen hanging about, so combustible, and not very well armored... In the Wild West environment of this Civil War era, the people can’t exactly just shoot off all the time – this, actually, proves beneficial for our heroes at one point. Not everyone is as keenly aware of the dangers the airships pose, however…

“Behind the dirigible someone who had been standing too close to the engine mounts screamed and probably died as the craft howled violently to life.”

The centrality of the dirigibles to the story also means we are treated to a great aerial battle roughly halfway-through the story – a dogfight (of sorts) that is as well-written as any I’ve read in a good long while – certainly better than, for example, the Star Wars ones I’ve been reading lately, as they tend to be formulaic in the extreme.

Despite reading this relatively quickly, I was never really hooked, for some reason. Clementine is certainly better than Boneshaker, in my opinion. This is probably because of we are given a much expanded view of this reality and the environment in which Priest’s characters are operating. Priest’s narrative is a little uneven, at times, which was a real pity: there are moments when description goes overboard, when it’s unnecessary or hyper-detailed. I think this could be the result of Priest’s having such a clear view of her world that she wants to tell us all about it, and make sure we are seeing in our minds the same as she does. This is not strictly speaking a bad thing, but it did impact the flow of the story at certain moments.

That being said, Priest’s prose is, for the main, very good and well-crafted. There is a wit on display that is understated and expertly presented. It’s not laugh-out-loud hilarious, but there were many comments throughout that raised a smile.

Hainey hoisted Maria with a jerk and a backwards stumble that drew her up out of the hole left by the former glass ball turret; and although the sucking vortex left by the circular absence roared with broken, swirling wind, they were safely away from its reach. For a few seconds, Maria lay panting on the metal floor — and then she sat up, letting the wild, intruding air flay her hair to pieces.

She said, “Oh no. My underthings.”

“My… never mind.” She leaned forward just enough to see over the edge just a little bit, and she spied the undergarments floating happily down to Missouri.

Clementine does so much more to introduce us to, and expand our overall impression of the wider United States in this reality, but without sacrificing pacing and focus on the actual story. It’s pretty good, actually. I would certainly recommend this novella to anyone who has read Boneshaker: if you enjoyed the first novel, then you should love this; and if you didn’t like that novel, then Clementine could well win you over. As I said, it still suffers some strange pacing issues, but I think it’s much better than Boneshaker, and avoids most of the flaws I found with that novel. Like that book, the dialogue in Clementine is again natural and fluid. There is certainly a good deal to like about this novella.

An absolutely welcome improvement, I find myself quite eager to get around to Dreadnought, Ganymede and Inexplicables. I’m certainly starting to see why this series has become so popular.

Posted by Civilian Reader at 9:53 PM