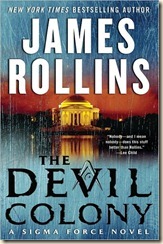 Deep in the Rocky Mountains, a gruesome discovery stirs international attention and controversy. Despite doubts about the bodies’ origins, the local Native American Heritage Commission lays claim to the prehistoric remains, along with the strange artefacts found in the same cavern: gold plates inscribed with an unfathomable script.

During a riot at the dig site, an anthropologist dies, burned to ashes in a fiery explosion in plain view of television cameras. All evidence points to a radical group of Native Americans, including one agitator, a teenage firebrand who escapes with a vital clue to the murder and calls on the one person who might help — her uncle, Painter Crowe, Director of Sigma Force.

To protect his niece and uncover the truth, Painter will ignite a war among the nation’s most powerful intelligence agencies. Yet an even greater threat looms as events in the Rocky Mountains have set in motion a frightening chain reaction, a geological meltdown that threatens the entire western half of the U.S.

I’ve long been a fan of Rollins’s Sigma Force novels, and being in the United States at the moment meant I could get my hands on Devil Colony months before its UK release date. Filled with intrigue, action and adventure – not to mention some great characters – The Devil Colony is an interesting, science-infused action-adventure.

In true Rollins fashion, The Devil Colony jumps around a bit (geographically – the plot is very well constructed). From Iceland’s volcanoes, to the deserts of the American Southwest, Fort Knox to Yellowstone National Park, the members of Sigma Force must try to unearth the truth about a shadowy cabal, that appears to have been manipulating American history since the founding of the thirteen colonies. At the same time, mysterious caches of what appears to be ancient nano-tech are destabilising, causing devastation in their wake. It is up to Sigma Force to get ahead of the chain reaction and halt the destruction.

The Devil Colony was not as streamlined as some previous Sigma Force novels. I’m not really sure why this is the case – Rollins has never shied away from providing background or scientific detail, but in this novel it sometimes felt like we were getting a little too bogged down in the details. This was especially the case in Part One (of Three), which I felt took a little longer than necessary to set the scene. Nevertheless, I did enjoy the science and history Rollins used as a basis for the plot, before putting his own spin on things to make an entertaining story (as always).

There’s a lot of great action in here, too. Despite the seeming increase in exposition, Rollins once again showcases his gift for writing realistic action scenes – it’s very close, personal, and often brutal. No character is safe from injury, and Sigma operatives frequently put their lives on the line. Reading a novel by Rollins is somewhat akin to enjoying a distillation of everything that makes Indiana Jones and James Bond awesome, with a dollop of Michael Crichton thrown in for good measure. And I really like this mix.

Rollins writes in a genre that loves conspiracies, and The Devil Colony taps into a number of classics (Fort Knox, Secret Societies, and the death of Merriwether Lewis – all of which, interestingly, are covered by Brad Meltzer’s History Channel show, Decoded). The author manages to make them his own, though, so we’re not getting tired and regurgitated pap – from what I know of US history, Rollins has done quite a huge job of weaving together some great, esoteric and historical Americana into something pretty interesting and unique. And the revelation that comes in the final pages bodes very well for the next novel in the Sigma Force series (please let it come out soon!).

Characters are very well established now, so it’s always nice to spend time with them. Personal trials and tribulations, and one tragedy are faced, and Rollins handles this stuff delicately and deftly. Many times, the human side of action-adventure novels is forgotten, but Rollins always gives us plenty to make his characters far more substantial. They are all real and varied, and none of them feels like a stock character – the author has made sure they are three-dimensional and realistic.

Perhaps the only weak point in the novel for me was the nature of the antagonist, which I thought was a little shaky. It became apparent that he was necessary to set up what is to come, but I often found myself wondering if I’d missed something important, because he felt a little shoe-horned in at times. He was certainly interesting (as were a couple of his minions), but he didn’t feel like he fit into the novel as well as previous antagonists have done.

So, in summation: a bit of a slow start and a gentler speed overall, but a novel featuring plenty of action, engaging characters, and stakes raised as never before for Sigma Force – both professionally and personally. The Devil Colony maintains all the hallmarks of a Rollins novel, and is great fun as a result. He really is the master of this genre, and few come close to matching him.

The Devil Colony will be published in the UK by Orion Books, on December 29th, 2011. It is already available in hard cover in the US. 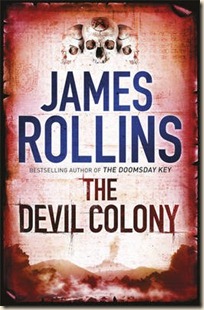