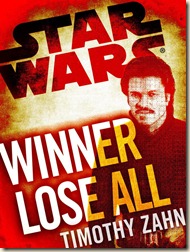 Lando and a pair of unlikely allies find themselves involved in a dangerous game. Fortunately, Lando can survive against the odds — a skill that he will need in spades.

Lando Calrissian’s no stranger to card tournaments, but this one has a truly electrifying atmosphere. That’s because the prize is a rare sculpture worth a whopping fifty million credits. If Lando’s not careful, he’s going to go bust, especially after meeting identical twins Bink and Tavia Kitik, master thieves who have reason to believe that the sculpture is a fake. The Kitiks are beautiful, dangerous, and determined to set things right — and they’ve convinced Lando to help them expose the scam. But what they’re up against is no simple double cross, nor even a twisted triple cross. It is a full-blown power play of colossal proportions. For an unseen mastermind holds all the cards and has a fail-proof solution for every problem: murder.

This eBook short story doesn’t need a very long review. Indeed, to offer more than passing comment would likely result in the whole thing being spoiled. The story really isn’t very long at all, but it has the classic feel of Zahn’s and others’ classic Star Wars novels.

The heist and the uncovered conspiracy is nicely unveiled, and the pacing is steady. It’s not break-neck, but the story unfolds quickly. Perhaps too quickly: there were a couple of leaps that were needed in order to keep the things going, which made certain progressions a little too fortuitous. I think the story could easily have worked as a longer piece, even a novel, as there was plenty of scope for expansion and exploration – not only of the world, but also the characters we’re introduced to. It could perhaps have been billed as a fourth volume in the Lando Calrissian Adventures (which I would also recommend). I hope some of the new characters re-appear in the future, too – the twins are great, as is their partner.

I found it interesting that Lando, despite being the only figure on the cover, was not as central to the story as I had expected. He is joined by a cast of other scoundrels who are pulling their own scam.

Winner Lose All will serve as a perfect appetizer to tide you over until the release of Scoundrels. Definitely recommended for fans of the Star Wars Expanded Universe, and anyone who wants a short slice of SW conning.

Posted by Civilian Reader at 4:39 AM