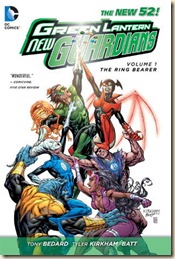 Green Lantern Kyle Rayner finds himself at odds with the Guardians of the Universe when rings from all the separate Lantern Corps come to claim him. But the other Corps aren’t too keen on the Green Lanterns stealing their rings…

Continuing my Green Lantern reading binge, Green Lantern: New Guardians is a bit of a different title. It follows another human Green Lantern, Kyle Rayner (I haven’t yet figured out why there are so many from Earth…). He has the typical anti-authoritarian streak that characterizes most of the human Lanterns, and is a bit more cheeky to boot. The story isn’t as tight as Geoff Johns’s from Green Lantern, but it’s fun and action-packed nevertheless.

We get a super-quick origin story for Kyle Rayner’s induction into the Green Lantern Corps: Ganthet chose him (rather than the ring choosing Kyle, which is the norm). 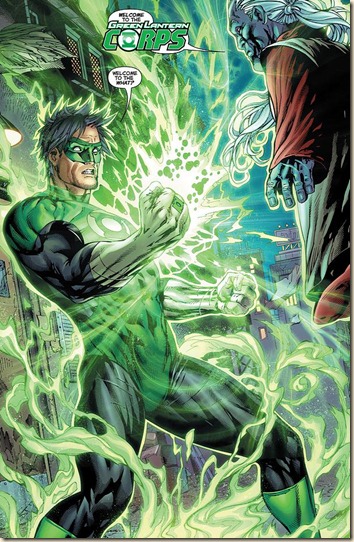 The story then jumps ahead a bit, to a point when Rayner has become a bit more established in his own right. Then, strangely and randomly, a ring from each of the other spectrum Corps separates from its host and chooses Kyle. This has only been done once before, by an immortal, according to Ganthet later in the book. Kyle is most certainly not immortal, so things don’t go too well. First, though, he ends up pretty badass, like this: 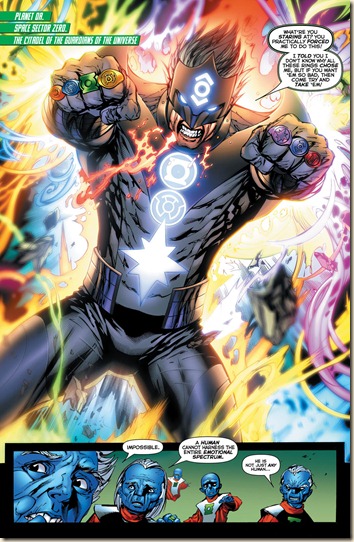 As it turns out, Agent Orange (the sole Orange Lantern, powered by Avarice) is up to something, and he’s trying to get the other Lanterns to do his dirty work for him. It involves the Orrery – a life-size, fake solar system that has appeared at the center of the galaxy. Some of the other Lanterns, who came after Kyle believing that he stole the rogue rings, form an unwitting alliance in order to get to the bottom of the mystery Agent Orange presents them with. 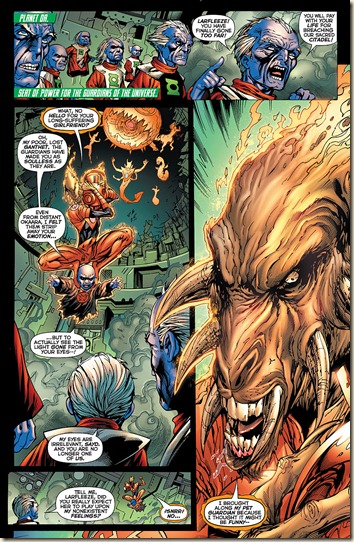 There was a comment late in the book, from the Big Bad (not telling you more than that) as he comes under full assault by the uneasy alliance, which mirrored my own thoughts on the scope of the various Lanterns: “How many colors do you people come in?” I can’t help but imagine what it was like when the new colors were first introduced, and having fans mutter, with raised eyebrows, “Wait, there’s another one…?”

The series is a lot more brash and riotously-colored than the other Lantern series that I’ve tried. It gives it a nicely varied look and feel, but I did miss the dark greens, blues and blacks from Green Lantern and Green Lantern Corps. New Guardians is not as serious as the other Lantern titles (Agent Orange’s amusing minion-construct certainly robs some scenes of any gravitas…). The dialogue’s not as strong, either, unfortunately – there are a few clunky exchanges, but they don’t overshadow what’s good about the story. Nevertheless, then, the series is pretty fun and fast-paced. 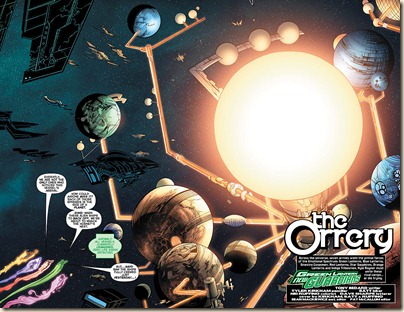 The book ends rather abruptly, without much of a conclusion. There’s a massive battle that sees the seven Lanterns finally pulling together and, counter-intuitively, forming something that vaguely resembles a functioning team. I’m certainly interested to know how the story continues – after reading the zero-issue (which is not a prequel, but a kind of re-set in between storylines), I think it could end up going in a pretty interesting direction. Hopefully, the story will get a bit deeper, too – there are plenty of hints throughout this book that there is something more interesting going on behind the scenes. There are also some connections with the other Lantern series, of course. I think it has a lot of potential.

New Guardians is probably one just for completists and Lantern enthusiasts. But, if you do give it a try, I think you’ll find something fun and engaging. 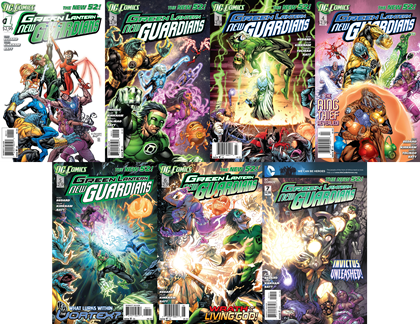 Posted by Civilian Reader at 5:23 AM