Upcoming: “The Grim Company” by Luke Scull (Head of Zeus) 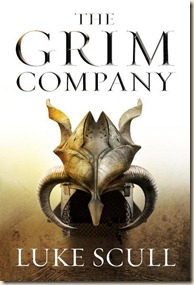 I only discovered Head of Zeus, a new UK-based publishing company, in August. A manuscript submission I was reading turned out to have already been snapped up by HoZ (much to my chagrin, as I really enjoyed it – although, I at least know the book’s going to see the light of day). I did some digging, and the publisher looks like it’s going to have a very interesting, not to mention diverse, list.

Luke Scull’s The Grim Company is one I think fantasy fans should definitely keep their eyes open for:

The grey granite walls of Dorminia rise to three times the height of a man, surrounding the city on all sides save for the south, where the Broken Sea begins. The stone is three-foot thick at its weakest point and can withstand all but the heaviest assault. The Crimson Watch patrol the streets even as Salazar's Mindhawks patrol the skies.

The Grey City was not always so. But something has changed. Something has broken at its heart. Perhaps the wild magic of the dead Gods has corrupted Dorminia's Magelord, as it has the earth itself. Or perhaps this iron-fisted tyranny is the consequence of a lifetime of dark deeds...

Still, pockets of resistance remain. When two formidable Highlanders save the life of a young rebel, it proves the foundation for an unlikely fellowship. A fellowship united against tyranny, but composed of self-righteous outlaws, crippled turncoats and amoral mercenaries. A grim company. But with the world entering an Age of Ruin, this is not a time of heroes...

The Grim Company, the first book in the eponymous series, will be published in February (eBook) and March (Hardcover) 2013. I’m going to do my best to get it reviewed and, if possible, Mr Scull interviewed… Watch this space.

Check out Luke Scull’s website for more information. Luke also works as the lead designer at Ossian, the game company that brought us The Witcher.

[Correction: Ossian developed the expansion to The Witcher. Apologies!]