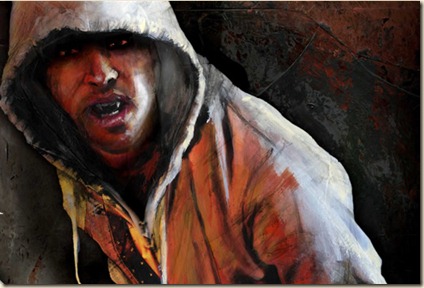 The Four Realms, Adrian Faulkner’s upcoming debut novel, sounds really cool. It’s an interesting new take on Urban Fantasy and parallel cities. After first hearing about the novel and author, which wasn’t that long ago, I thought it would be nice to get in touch with Adrian and see if he could tell us a little more about his work.

Let’s ease into things: Who is Adrian Faulkner?

Let’s see. I’m a massive geek and proud of the fact. I spent every ounce of my spare time for a decade as a reporter and commentator in Pop Culture. So I could start my day writing about Hellboy and end it writing about Star Wars Collectibles. It was a lot of hard work and I got to meet a lot of cool people. The trouble was that I spent all my time writing about other people’s creations with no time to work on my own. So I gave it all up, worried I’d made the most stupid mistake of my life and dedicated the time to writing the stories I’d always wanted but had never found the time to write.

When I’m not writing, I like videogaming (World of Warcraft – For the Horde!) and Geocaching (venturing outdoors to hunt Tupperware armed only with a GPS and a pen).

Your debut novel, The Four Realms, was published today by Anarchy Books. How would you introduce the novel to a potential reader? Is it part of a series?

The story really starts when half-vampire Darwin finds a notebook on a corpse. It’s in a strange language and so he pockets it, not knowing that the mysterious Mr West and his colleagues are after it. Before he knows it, vampires are being taken out and he finds himself trying to lead the survivors to safety. To add to his misery, the vampires don’t consider a half-vampire to be one of them and are not sure if they want to be saved.

Meanwhile, 82 year-old Maureen Summerglass is a gatekeeper between worlds. She’s done the job all her life and it’s got to the stage where she lives in fear of anyone coming into her house in case they discover the cellar. When she suspects that the murder of a friend has been covered up, she breaks a lifetime of duty and goes through the gateway into the city of New Salisbury trying to find clues as to what happened to his missing notebook. There she discovers a world unlike the one she believed, filled with fast food outlets, tuk tuks and shotgun wielding centaurs. She also discovers she may just be the first human female to do magic, which is handy, as the elves seem to be after her.

The plan is that this is the first of four books. There is a big (and I mean big!) overarching story but The Four Realms works as a standalone. My contract with Anarchy is currently only for the first but if the other books are good and there is demand for them I’m sure readers will get to read them one way or another. 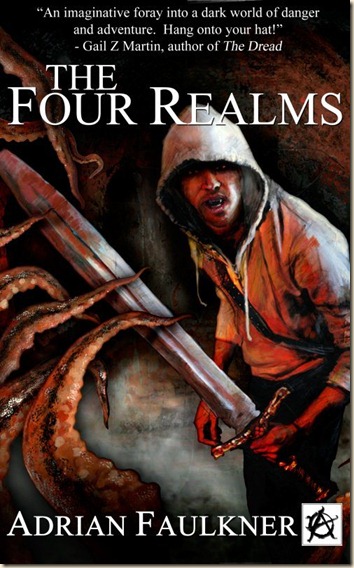 I’m terrible for not writing ideas down. I have a lot of them and am content to let them fight for survival in the soup of my brain. Sometimes they merge and mutate of their own accord, taking the form of stories. Once they get that far, then it’s more a case of having to write them. They nag at me until I do so. The Four Realms started as a seed of an idea over a decade ago and grew into a story I just had to tell.

As for inspiration, working in pop culture gave me a wide eclectic love of cool stuff whether it be low or high art. I love to mix things up, juxtapose things together, so I’m a big fan of stuff that does this.

You know, I don’t remember ever not reading genre fiction. My earliest genre memory is of reading Watership Down when I was seven. From there I went to the Narnia books and it sort of spiralled out from there.

It’s not really sunk in yet! I don’t think it ever will. As any aspiring writer will know, you spend years, commit blood sweat and tears to the page in the hope that one day you will make it. You dream of one day answering questions such as this. So let me just say I spent a long time looking at the question and quietly chuckling to myself.

What I never realised was just how much time the business of writing takes (i.e. promoting a book doing interviews such as this). I love it but I need to be better at organising my time in 2013.

The Narnia books had a big influence on me as at age eight I wrote an 18 page fantasy story. The teacher thought it so good, they typed it up and put it in the school library. I then went on to write a 120-page sequel which at eight was a massive undertaking. I remember absolutely nothing about it other than it had an owl called Mr Gillofrey. Since then I’ve always been creating stories of one form or another.

I love that genre is so diverse. We’ve got new weird going on in one corner, traditional epic fantasy in another, urban fantasy in yet another. I love elements of each. The big danger is that we as a community don’t realise how diverse it is and start trying to dictate which corners are cool and which are not.

The Four Realms is an Urban Fantasy, but one with elements of traditional fantasy, Lovecraftian horror and maybe even a splash of science fiction. I love to mix it up!

I’m working on the follow-up to The Four Realms. It’s provisionally called The Thieving King, and sees Maureen on the run with a paranoid wizard and Darwin join the New Salisbury underground. I’m really excited about it, not only because I finally have a legitimate reason to write it, but because it has what I as a reader would think the coolest ending ever. I am, of course, biased.

I’ve spent so many years trying to sample the market, reading the odd book here and there in the hope that I would understand what’s selling and therefore be better placed to sell the novel. It’s meant I’ve read a lot of great first books of series I’ve never got round to finishing. So I’ve said that 2013 is my year for reading for pleasure rather than research. I’m working my way through the Dresden Files at the moment and just loving them.

Eva Mendez once touched my bum! I was at San Diego Comic Con one year and she came into the press area during the Tenacious D concert. She was behind me and when she turned to talk to someone, her hand brushed my backside.

2012 was just a fantastic year for me. I hope I can get The Thieving King out in 2013 and continue to further my writing career. As I keep telling myself, this is just a beginning and I need to build on it. But other than that, I hope I can connect with people who love the book.

Learn more about Adrian’s work and so forth on his website. He can also be found on Twitter. Coming next week (Tuesday), a guest post on “The Worldbuilding of the Four Realms”.