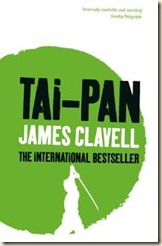 Set in the turbulent days of the founding of Hong Kong in the 1840s, Tai-Pan is the story of Dirk Struan, the ruler – the Tai-Pan – of the most powerful trading company in the Far East. Struan is also a pirate, an opium smuggler, and a master manipulator of men.

This is the story of his fight to establish himself and his dynasty as the undisputed masters of the Orient.

James Clavell’s magisterial Tai-Pan, the second book in his Asian Saga, was the first book to completely gripped me. First published in 1966, it is a historical novel that is, for me, the benchmark for all future novels that I’ve read.

The novel begins in the aftermath of the British victory in the first Opium War (1839-1842) and the subsequent seizure of Hong Kong (it would remain in British hands until 1997). The island’s large natural harbour was believed to be of the utmost import by both the British government and the various trading companies who, for all intents and purposes, ran the Empire – not least for the relative cover it provided in the typhoon-prone region. Much like modern corporations today, these trading companies and the British government were hoping to use Hong Kong as a staging point for trade with mainland China – then, as now, a highly lucrative market.

The novel features a grand cast of characters, but it is Dirk Struan and Tyler Brock, former shipmates and the owners of two of the largest trading companies in Asia who form the main focal points of the novel (as well as those in their immediate orbit). Their shared history as seamen, and the difficult relationship they had, initiated an intense sense of competition. In a theme that would be later echoed in Jeffrey Archer’s Kane & Abel (1979), the novel is largely about the competition between these two men and their trading houses as they try to dominate their markets and industry. Both men continually seek to destroy each other in both business and personal matters. These two trading family are actually based on real entities. Dirk Struan is loosely based on William Jardine (1784-1843), a ship surgeon who went on to co-found Jardine, Matheson Holdings Limited (est.1832), a huge Scottish trading company, and the inspiration for Struan’s ‘Noble House’, which remains highly active in Asia today. The Brock Family is supposedly based on the Dent family, and their company Dent & Co (1824-1867).

As the head of the largest trading company in Asia, Struan is referred to as the titular Tai-Pan. The conflict between Struan and Brock boils effectively boils down to a Machiavellian quest for power maximisation and prestige. The story of the Struan family and their trading company was continued in Clavell’s 1981 novel, Noble House (which I sadly have yet to find time to read). Struan’s affection for Asia is particularly well portrayed, as he rejects certain elements of his European heritage, supplementing his lifestyle and beliefs with some he acquires in his long years in Asia – he ‘goes native’, but not completely, showing how foreigners can be shaped and affected by their adopted homes and cultures.

I read Tai-Pan while still quite young, so I have no doubt that I would get a lot more from a re-reading of the novel, and I would get greater enjoyment from and understanding of the politics, history and themes that lie behind the story (especially given my degree in East Asian history and studies in international relations). My memory of reading Tai-Pan, however, is that I was utterly hooked. Clavell’s prose are so well-crafted, so engaging, and coupled with multi-layered plotting that dragged me on through the story, reading well into the night – I was actually on a family vacation at the time, much to my parents’ annoyance, as I was more interested in reading the novel than getting the most out of Bali (we lived in Malaysia at the time). It truly felt like the book had got its hooks into me and I was, to put it bluntly, utterly addicted to the story and reading about the characters. It’s considerable heft also made me feel like I could sink into the story, getting to know the characters intimately.

Perhaps the only recent novel that has truly recalled Tai-Pan’s and Clavell’s expert portrayal and re-creation of Asia on the page is Charles Cumming’s Typhoon – Clavell’s Asia comes alive and fully realised on the page, and even without experience of the region you will almost be able to taste the humidity of monsoon season, hear the sounds of 19th Century Hong Kong, and in all likelihood wish you could have lived there and then.

If you have yet to read anything by Clavell, then I would strongly urge you to read Tai-Pan. Utterly engaging, it is an epic, near-flawless work of historical fiction. Easily one of my top-five novels of all time. 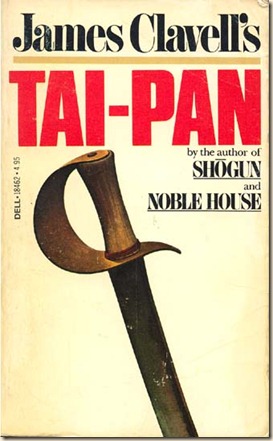