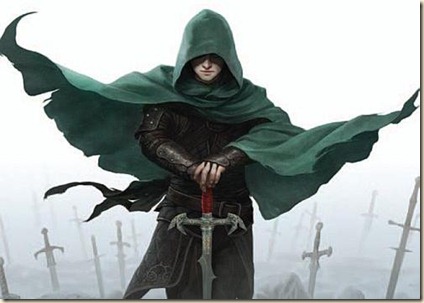 The Prince of Thorns is one of this year’s most anticipated fantasy debuts. In advance of its release, I thought it might be nice to introduce the author, Mark Lawrence, and he was kind enough to answer a few questions about his new novel and writing.

Could you tell us a little bit about what we can expect from Prince of Thorns, the world in which it is set, and also how you came up with the idea for the plot?

I should caveat this reply with the fact that I’m torn on the issue of discussing the book’s content. My ideal reader would just pick Prince of Thorns up on a whim in somebody else’s house and start reading without even glancing at the blurb on the back. For me, every book is a process of discovery and anything said about the story beforehand detracts from that, steals from the story if you like. That said, there is a perfectly reasonable expectation that readers need some motivation to get hold of the book in the first place and spend their valuable time reading it. I’d love that motivation to be a trusted friend saying “read this, it’s great” – but that domino effect (if it ever takes place) has to start somewhere. 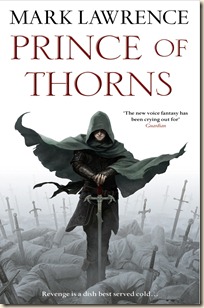 Prince of Thorns is very strongly character driven. It’s a brutal but hopefully well-observed tale about an extraordinary boy, Jorg Ancrath, on the cusp of adulthood and bent on revenge. The setting appears to be the pseudo-medieval domain of many fantasy books, but turns out to have a twist to it that renders it rather less generic.

I made Prince of Thorns up as I went along. Each chapter began with an essentially blank mind and I just started typing. The idea that sparked me was not an idea for the plot, but an idea for the character. I wanted to write about as dark and destructive an individual as I possibly could whilst still making the reader care about that person in some way, be it on account of their charm or just through that instinct responsible for people rubbernecking traffic accidents.

Where do you see your series going in the future?

Prince of Thorns can be read as a stand-alone book. There are open questions at the end of it, and I hope people will want to read more about Jorg, but I don’t think anyone will feel they’ve been left hanging. I’ll call the story a trilogy rather than a series as I don’t envisage more than three books. My taste is for stories that end rather than stagger on until a disillusioned public put them out of their misery by ignoring them. And as to where the story will go? Somewhere new. It certainly won’t be more of the same. Jorg will grow up. Probably into someone you don’t want to meet.

What drew you to the fantasy genre, and who/what would you say are the biggest influences on your work?

I blame my mother. She read me Lord of the Rings when I was seven. I cried my eyes out when Gandalf died (hopefully that’s not a spoiler...). I consumed a lot of fantasy in the 80’s, less in the 90’s, very little this century. I read a lot of modern classics (and not so modern). A big influence on Prince of Thorns is Anthony Burgess’ A Clockwork Orange. A big influence in making me want to write better fantasy, leading me by example, has been George R.R. Martin. My book is nothing like his work, but he singlehandedly dragged me back into reading fantasy because he’s so damn good. 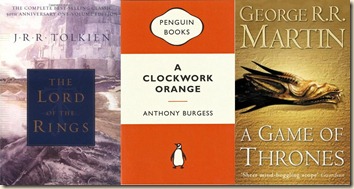 What’s your opinion of the genre as a whole today? Where do you think Prince of Thorns fits in?

I have a very small window on the genre today. Typically, if someone reels off ten popular fantasy writers from the past decade I’ve read one or two of them. I am working on rectifying that. I certainly feel that GRRM raised the bar for a new generation of writers. I think there’s probably more emphasis on populating fantastic stories with real people these days. By “real” I don’t mean “everyday”, but human beings who we can relate to rather than icons.

That small window doesn’t really allow me to see where Prince of Thorns fits in. I’ve not read the writers that I’m most commonly compared to (Joe Abercrombie and Brent Weeks), but they sound good, so I intend to give them a try!

Do you have fond memories of your first writing attempts/projects?

My writing doesn’t really have a clear start point. I got into writing through running role-playing games, then writing turned into a large scale fantasy play-by-mail game. So when that turned into writing short stories, and then long stories, it was all part of a slow ramping up of interest. Certainly the first book I wrote was a chore to read, so I don’t remember it that fondly.

How do you enjoy being a writer? Do you have a specific working practice?

I enjoy writing. I’m not sure at what point I stopped being somebody who writes and started being a “writer”, but the enjoyment is mostly in the writing rather than the being a writer.

I write late at night when my little girl (who is disabled and needs me to look after her when I’m not at work) is asleep. I just slip away into a spare room and start typing. No rituals.

How do you keep busy outside of writing?

I work as a research scientist. My first degree is in physics, my Ph.D in a narrow slice of mathematics. Apart from that and the occasional escape to my allotment, I’m pretty much occupied full time with writing and childcare. Although I will admit to getting ridiculously good at Call of Duty: Modern Warfare 2 this year, and Command & Conquer 3 last year.

Do you have any advice for aspiring writers?

Join an online writing group. Learn how to accept criticism. Enjoy the process and don’t pin your hopes on success.

What plans do you have in the pipeline? Any other series or projects you’d like to try, when you have the time?

I’m working on a collaborative writing project with a friend and hopefully that will bear fruit. Also I’m starting to put together a fantasy gun-slinging novel that’s grown out of several linked short stories, two of which are scheduled to appear in Black Gate magazine in due course.

I’m reading The Bad Mother’s Handbook by Kate Long (fiction) and Andrew Marr’s The Making of Modern Britain (non-fiction). The last fantasy book I read was Robert V.S Redick’s The Red Wolf Conspiracy, and the next will hopefully be something by Abercrombie, Patrick Rothfuss, or Neal Asher.

The publication of Prince of Thorns and A Game of Thrones on TV.

A big thank you to Mark for taking the time to answer these questions. If you’d like to find out more about Prince of Thorns, the head over to Mark’s website, where you can find information about the characters, the world, and the book (including a map!). The novel is also available for pre-order from all the usual stockists.

Posted by Civilian Reader at 11:10 AM