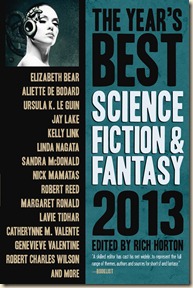 I don’t think I’ve ever picked up one of the Year’s Best fiction books. I once bought one of the politics collections, because it had an article by Matt Taibbi in it. This year’s SFF collection, however, looks pretty good – not to mention containing authors whose work I’m both aware of and interested in. [I found out about it from SF Signal. The book is published by Prime Books.]

This could be a good end-of-year read, or gift for the SFF fan in your life, or even a good place to start for someone who wants to give the genres a try. When you consider that the book features such rising stars as Aliette de Bodard, a slew of (to me) unknowns, and more established authors like Ursula le Guin, Jay Lake and Robert Charles Wilson, this is a pretty solid selection.

“A Murmuration of Starlings” by Joe Pitkin (Analog)

“In the House of Aryaman, a Lonely Signal Burns” by Elizabeth Bear (Asimov’s)

“The Castle That Jack Built” by Emily Gilman (Beneath Ceaseless Skies)

“The Governess and the Lobster” by Margaret Ronald, (Beneath Ceaseless Skies)

“Scattered Along the River of Heaven” by Aliette de Bodard (Clarkesworld)

“Twenty-Two and you” by Michael Blumlein (F&SF)

“One Breath, One Stroke” by Catherynne M. Valente (The Future is Japanese)

“The Philosophy of Ships” by Caroline Yoachim (Interzone)

“The Gravedigger of Konstan Spring” by Genevieve Valentine (Lightspeed)

“Arbeitskraft” by Nick Mamatas (The Mammoth Book of Steampunk)

“Under the Eaves” by Lavie Tidhar (Robots: The New A.I.)

“The Weight of History, The Lightness of the Future” by Jay Lake (Subterranean)