Upcoming: “Herald of the Storm” by Richard Ford (Headline) 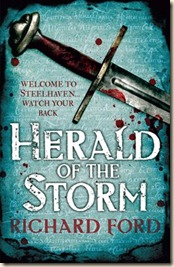 I haven’t heard much about this novel, but I caught a brief mention of it on Fantasy Faction’s run-down of their most-anticipated novels of 2013. (It was an honorable mention.) I did some digging, and found… not a whole lot more, actually. I did managed to get the synopsis, though, and it’s piqued my interest:

Welcome to Steelhaven... Under the reign of King Cael the Uniter, this vast cityport on the southern coast has for years been a symbol of strength, maintaining an uneasy peace throughout the Free States. But now a long shadow hangs over the city, in the form of the dread Elharim warlord, Amon Tugha. When his herald infiltrates the city, looking to exploit its dangerous criminal underworld, and a terrible dark magick that has long been buried once again begins to rise, it could be the beginning of the end.

Described as “A new epic fantasy for fans of Joe Abercrombie and George R.R. Martin” (there’s an original tag-line…), Herald of the Storm will be published in the UK in April 2013.

I’ve been trying to figure out if the author is the same Richard Ford who wrote Canada and The Sportswriter. Very different novels, but it would make this an even more interesting proposition.

Update/Correction: I managed to find out that it is not the Canada/Sportswriter Richard Ford. Rather, it’s the Richard Ford who wrote the well-received Kultus. More information can be found on the author’s Website and Twitter.

Posted by Civilian Reader at 4:20 PM