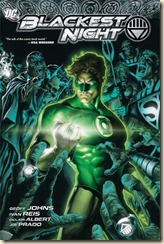 Throughout the decades, death has plagued the DC Universe and taken the lives of heroes and villains alike. But to what end? As the War between the different colored Lantern Corps rages on, the prophecy of the Blackest Night descends and it’s up to Hal Jordan and the Green Lantern Corps to lead DC’s greatest champions in a battle to save the Universe from an army of undead Black Lanterns made up of fallen Green Lanterns and DC’s deceased heroes and villains.

This book is, in a word, epic. The story, the action, the consequences are incredible. Unfortunately, that also makes it a little tricky to review. This is set shortly before the New 52 re-launch, and taps into (as far as I can tell) every DC Comics title. The story is very fast-paced, and I couldn’t put it down. It is also, however, a tricky review: given how quickly things start to spiral and take on a life of their own, I have decided to keep story-elements to a minimum.

At the start of this book, Batman is dead. Blackest Night, it turns out, falls after another epic cross-title event, Final Crisis. We open on Green Lantern Hal Jordan standing by Bruce Wayne’s unmarked grave. The Flash turns up, and the two of them fill each other in on the recent events of the DC Universe. (There’s also a handy “Story So Far” page before the comic proper starts.) From the very beginning of the book, we get the sense that this is going to be a pretty different DC book – one that is far darker, more gothic and horror-tinged than normal. And it’s a damn fine story. 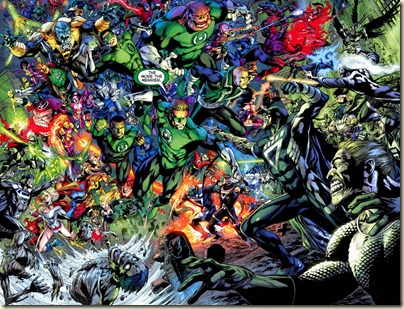 The story is huge, broad in scope, and impacts the whole DC Universe. We see the various Lantern Corps still at each others’ throats, struggling to exert their dominance over specific sectors. The Guardians on Oa are still trying to pull everyone’s strings. But then a Black Lantern rises, spewing forth millions of Black Rings that seek out dead heroes and villains…

That the book draws together such a wide collection of heroes and villains from across DC’s many titles, meant that certain things were a bit vague for someone who hasn’t read everything, or even a lot of what has come before. A lot of minor heroes and villains are thrown into the mix, many names were hitherto unknown to me. Certain Significant Moments were lost on me (thanks to Google, and also the interesting “Director’s Commentary” at the end of the book, though, some of this was cleared up).

This leads me on to the central theme of the book: death and resurrection in the DC Universe, and maybe comics in general. I won’t go too much the specifics of Blackest Night, who’s killed or brought back and how. I do, however, wonder if Johns and Co. were offering at least a partly-tongue-in-cheek commentary on the lives and deaths of super-heroes. The prologue, for example, will have comic skeptics raising an eyebrow: while the intro catches us up quite well to the ‘present’, it also paints a pretty bleak and complex situation – Batman’s dead; Aquaman’s dead; Martian Manhunter’s dead; there’s mention of The Flash’s death, Superman’s death, and also Hal Jordan’s own death. 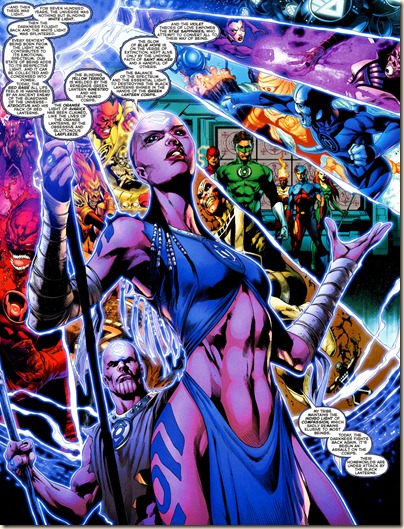 This page offers a nice explainer for the various Lantern Corps

Death-and-resurrection… most definitely a very big part of the DC pre-New 52 canon and playbook. Regardless of what you think of all of this, the story Johns has written, and how he’s used this cycle of life, is really quite excellent: he draws on so many past events, deaths and resurrections to weave a complex, engaging and addictive narrative. When it all comes together in the final two chapters, it was a wonderful surprise. The team pull off the whole thing with aplomb and style. Especially regarding the Lantern Deputies (not going to spoil any more on that element, but needless to say, it’s damned cool).

Backing up Johns’s script is the stunning artwork. The creative team have realized the story in such a stunning, vivid way. I liked that, despite this being (ostensibly) a Green Lantern event, the color-palette draws more on dark blues, greys and black. It is alternately moody and atmospheric (particularly the final couple of chapters), and one of the most colorful comics I’ve ever read. Reis has drawn some inspiring and near-peerless spreads, too: they are so highly detailed, crammed full of characters and story elements, that you are (happily) obliged to linger on them for far longer than you normally would. Incredible stuff. Reis’s images are perfectly finished by Albert, Hunter, Ferreira, Prado and Sinclair. 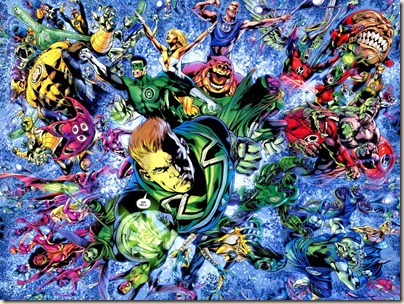 Part of me wishes I’d built up to this book, working my way through Johns’s Green Lantern: Rebirth (2004-5) and 67-issue Green Lantern series (2005-11). While I fully intend to read those books, I think Blackest Night has enough context and exposition to make for a relatively easy read for inexperienced fans.

Overall, this is a superb book, and absolutely recommended to all fans of the DC Universe. 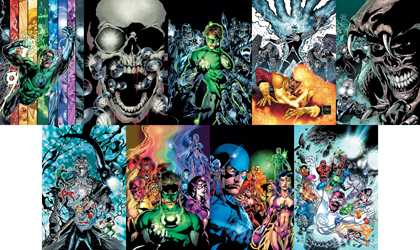