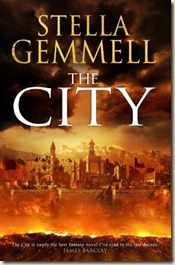 Stella Gemmell is the wife of the late, great fantasist David Gemmell. Sad to say, I’ve never read any of Gemmell’s work, but based on the description of this upcoming novel, this will change in 2013. (I also have a general desire to read more of the classics of the genre.)

The City is ancient and vast, built up over the millennia, layer upon layer. Once a thriving metropolis, it has sprawled beyond its walls, inciting and waging constant wars with neighbouring tribes and kingdoms – creating a barren wasteland of what was once green and productive.

At the heart of the City lives the emperor. Few have ever seen him, but those who have recall a man in his prime, though he should be very old. Some speculate that he is no longer human, others wonder if indeed he truly ever was. And a small number have come to the desperate conclusion that the only way to stop the City’s incessant war and the constant bloodshed is to end the emperor’s unnaturally long life.

From the maze-like sewers and catacombs below the City, where the poor struggle to stay alive in the dark, to the blood-soaked fields of battle where few heroes manage to survive the never-ending siege, these rebels pin their hopes on one man: Shuskara. Once the emperor’s foremost general, he was betrayed long ago and is believed to be dead. But, under different aliases, he has survived, forsaking his City and hiding from the man to whom he once vowed his allegiance. Now, the time has come for Shuskara to emerge from the shadows and lead a final bid to free the City from those who have brought it and its people to their knees for so long...

The City will be published in April 2013, by Transworld. James Barclay, author of the Chronicles- and Legends of the Raven series (another series I will try in 2013), had this to say about Stella’s upcoming novel:

“This is an astonishing book and all the more amazing given that it is Stella Gemmell’s debut. It combines extraordinary scope with first class characterization, devastating and visceral battles, a multi-layered plot and a tightly-focused narrative that keeps you reading, eager for the next page. The City is easily the best fantasy novel I’ve read in the last decade.”