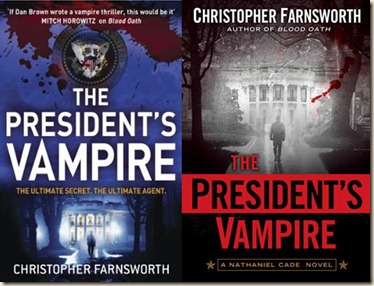 For 140 years, Nathaniel Cade has been the President’s Vampire, sworn to protect and serve his country. Cade’s existence is the most closely guarded of White House secrets: a superhuman covert agent who is the last line of defense against nightmare scenarios that ordinary citizens only dream of.

When a new outbreak of an ancient evil-one that he has seen before- comes to light, Cade and his human handler, Zach Barrows, must track down its source. To “protect and serve” often means settling old scores and confronting new betrayals… as only a centuries-old predator can.

Blood Oath, the first book in this series, took me rather by surprise. I approached it expecting a schlocky horror story, but instead got a pretty polished Urban Fantasy thriller, set in the world of politics and presidential power. It’s taken me a little while to get around to this second novel, but now that I’ve read it I think it’s safe to say Farnsworth is going to be a staple for the site. The story is interesting, and builds nicely on what we got in book one; although it’s not quite as assured, strangely (there were just a couple of niggles). As with the first, I raced through The President’s Vampire – it’s taughtly written, great fun, and blends the aesthetic of Supernatural (the TV series) with the stylistic sensibilities of a thriller. This is pretty great.

My only real issue with the novel came early on. Very early on, actually: In the introduction to The President’s Vampire, Farnsworth shows us Cade on 9/11 – he was impaled in a parking garage, impaled by some antagonist. The president then sends him to hunt down Osama Bin Laden. Strangely, Bin Laden knows who and what Cade is, and doesn’t seem overly afraid of him:

“You are not the worst thing this world has to offer... I know the truth. The sheep cannot hear it, but I have known for years. There is no God. Mohammed was not His prophet. My master will show you. This world belongs to him.”

Farnsworth then takes the general feel of certain crazier 9/11 conspiracy theories and makes them even more elaborate and outrageous, not to mention more in keeping with this supernatural setting. (It would be tricky to explain Cade’s role otherwise.) Apparently, George W. Bush wanted to kill Osama straight away, and they knew where he was, with the intention of bringing him back as proof and a warning. Dick Cheney, however, has a different idea:

“George – there might be advantages to always having Bin Laden out there. Nice to have a boogeyman whenever you need.”

The cynic in me chuckled at this, but also raised an eyebrow. The story then jumps forward to the next administration, the ‘present’. The president is now Samuel Curtis, who Zach Barrows used to work for, before being given the Vampire Handler gig. The War on Terror aspect, not to mention the random Cade impaler, just… disappear. This was a strange decision, as it made me question why we’d needed an introduction featuring Bin Laden at all. Perhaps it’ll be important in a future installment of the series.

The novel draws on a lot of conspiracy theory literature and a wealth of American urban legends: those little nuggets of bizarre, unexplained history, those moments when an unknown something or other has caused havoc or death. Farnsworth does a good job of playing around with these things (the JFK assassination, for example), and weaving into the story he’s trying to tell here. Some of the context, and also information about historical sightings of bizarre creatures, are provided in the chapter epigraphs. These openings also include diary and report entries written by the scientists and doctors tasked with examining Cade – his metabolism, his abilities, and also some conjecture.

We learn more about Cade’s history. We see the development of his working relationship with Zach, who is still not too happy with his latest assignment, and is trying to figure out a way to balance his new super-secret job with a desire to have as much of a real life as possible. It’s well-handled and portrayed (it’s not over-wrought or clunky), and his desire for a connection with someone else also gets him into a bit of a situation later on… Zach also gets better at the politics that surround Cade’s secret existence. The story also develops readers’ understanding of how Cade’s existence has been compartmentalized by the government, and how uncomfortable knowledge of him can make even the most powerful Washington operatives.

I blitzed through The President’s Vampire, taking very few notes along the way (a sign of how much I enjoy a book). It’s written with a strong thriller sensibility throughout – the focus is just as much on pacing and momentum as it is on interesting, supernatural bits and pieces. The pacing and fluid prose made this a very enjoyable read.

The story is a bit predictable, and certain larger elements were telegraphed more than I would have liked. However, like any thriller in which we know the identity of the antagonist (or, as in this case, figure out who that is very early on), part of the fun becomes seeing how the heroes will figure it out and how it will all end. The rest of the fun comes from the interesting things Farnsworth has done with the tropes, and how he’s blended them to create something unique and engaging. And also, especially near the end (pp.362-3 in particular), genuinely horrifying.

Overall, this is a very good urban/supernatural fantasy thriller. It stands out well from the pack, too, because it’s taken a unique premise and run with it, taking equally from thriller and Urban Fantasy norms. I really enjoy this series. Luckily, I already have book three on my shelf, Red White & Blood, so it should find its way into the rotation very soon.

Definitely recommended. This was a lot of fun.

Posted by Civilian Reader at 3:39 AM