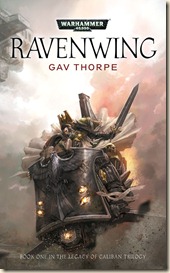 The Ravenwing stand apart from the rest of the Dark Angels Chapter – these dynamic Space Marines take to the battlefield upon steeds of adamantium and plasteel, and swoop from the skies in lightning-fast speeders to bring death to the foes of the Imperium.

When he joins their prestigious ranks, Brother Annael finds himself thrust into a whole new world of shadowy intrigue, and privy to secrets unknown to his common battle-brothers. In the wake of the conflict at Kadillus, hints of a dark conspiracy begin to emerge, and it soon becomes apparent that the Ravenwing has a sacred duty far more vital than hunting down orks...

Following on from the events in Purging of Kadillus and Angels of Darkness, Ravenwing marks the beginning of a new Dark Angels trilogy, The Legacy of Caliban. The novel focuses on the fast-attack specialists in the Dark Angels’ Second Company, the titular Ravenwing, the secrets they are privy to, and their all-consuming drive to preserve the Legion’s honour. True to the force’s nature, this is an action-packed story, but one supported by some more revelations about the Dark Angels difficult history and ultimate secret. It’s a solid start to the trilogy, and delves expertly into the psyche of the Dark Angels.

The novel starts very well by dropping the readers into the Ravenwing way of war. It’s a very  good introduction to the Ravenwing and some of their eccentricities and practices. The Dark Angels are a knightly Legion, maintaining many of their pre-Horus Heresy traditions. This does, however, give them a bit of a strange character – one I’m not sure everyone will like. They can be clipped and aloof when dealing with each other, and perhaps even archaic in their speech patterns and mannerisms. This certainly creates a distinct Legion character, and really sets them apart from other Legions. It didn’t take long to get used to it, though. It’s a double-edged sword, but one Thorpe wields skillfully, managing to sprinkle in some good, subtle humour. For example:

“Do you think we should slow down for our new brother?” said Sabrael. “I would not see a good machine ended on a tree.”

“Would that you should suffer such a fate to spare us your prattling, brother,” said Malcifer. “If you could control your tongue as skilfully as you master your steed we would be blessed by your silence.”

I thought this was an example of the good, understated humour in the novel, but also that the characters’ diction reminded me of more classic literature, as if they were in a 19th-century novel.

The Legion is one defined by its arrogance and self-assuredness, as well as their zealous adherence to the Imperial creed. A Marine questions the secrecy and methodology of the campaign, and he is shut down by a superior, told to “be content that we act against the renegade and the heretic without mercy.” He is also admonished that “It is not fit to wonder why they are misguided, nor is it [their] duty to seek empathy” with those they hunt and battle.

Telemenus, a member of the Fifth Company, is a good example of how far an Astartes’s pride can go – he’s one of the greatest marksman the Legion has ever produced, and in this novel he is coming up on his next weapons honour (for 100,000 kills by bolter). In his drive to reach this goal, he starts taking unnecessary risks, sometimes to the point of insubordination.

Beyond the action (of which there is plenty, in a multitude of locations), the novel largely focuses on the internal struggles of the Dark Angels, which were for me the most interesting part of the story. For example, the quiet tensions between the Ravenwing and the Fifth Company (who have been attached to this force) crop up a great deal. There are some wry observations from Fifth Company Marines – “The Ravenwing excel at encountering trouble where others would walk more softly” – but also a few instances when the tension comes dangerously close to boiling over. Tapping into the Dark Angels’ knightly character, though, they have Contests to solve disputes. The quips made at the Ravenwing’s expense are supported by other instances of dry humour from the squad of the Fifth Company who we follow.

There’s a great deal of reflection on the Dark Angels’ greatest secret: the Fallen. The fracturing of their Legion during the Horus Heresy (as recounted in Descent of Angels and Fallen Angels) is a secret the Legion has managed to keep from even the highest echelons of the Imperium’s leadership. Not only that, there are multiple layers of secrecy within the Dark Angels as well, which is part of the cause of tensions between the Deathwing (the First Company elites), the Ravenwing, and the rest of the Legion.

Ravenwing sheds a little more light on the hunt for the Fallen. At one point, we are given an excerpt from a garrison captain’s recorded log:

“We have buried our traditions, masked our real history in legend and mysticism to confound others. We are not bright stars, we are an empty blackness, a passing shadow that serves nothing but its own purpose… Ten thousand years ago our soul was split. We tell ourselves that the two halves of us are the light and dark. I have learnt a bitter lesson, that it is not true. It is a comforting lie, which keeps us safe from doubt, so that we do not ask questions whose answers we fear. There is no light and dark, only the shades of twilight in between.”

A good deal of the novel discusses the nature of secrecy and how the Dark Angels’ core elite and their addiction to secrecy threatens the brotherhood of the Legion as a whole. At one point, Master of the Ravenwing Sammael remembers words spoken to him by another Legion leader:

“What does it mean to be Dark Angels without the Fallen? We have come to define ourselves by them. Take them away and we are left without purpose. We have strayed far from the path, and it is my fervent prayer that you, Grand Masters of the Chapter, the wisest of us, can find the true course again.”

The Dark Angels have become willing to “put in grave danger the future of several billion servants of the Emperor” in their relentless, single-minded hunt for the Fallen. “I feel it is justified, but I do not know if it is righteous,” Sammael frets. 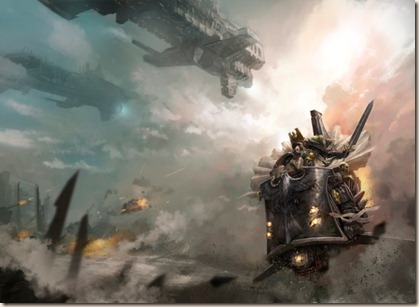 As the first part of a trilogy, Ravenwing does the trick of introducing us to the key players and locating the reader in the mind-set and style of the Dark Angels. I don’t think this is Thorpe's best work (that, I think, is still Deliverance Lost). He’s made the Dark Angels distinct, giving them a unique character and collective voice. But, at the same time, their similarities sometimes made it a little tricky to remember who was who. Some of the characters are distinct, certainly, and Telemenus and Sammael stand out. I don’t think this will turn off many readers, and the action certainly comes fast and often, and is very well-written.

The Dark Angels and their ongoing struggle against the Fallen is such an interesting story. Thorpe does a great job of giving us a little bit more – it’s tantalizing to the point of being addictive and infuriating at the same time (in a good way, if that makes sense).

Ravenwing is definitely recommended for all fans of Dark Angels, Space Marines and WH40k fans in general. This falls squarely in the action-dominated side of Black Library’s catalogue, but I do hope we get a bit more of the nuance and storytelling that Thorpe’s obviously so capable of producing. As I mentioned, this is a solid opening salvo in the trilogy, and I eagerly await the next in the series, Master of Sanctity.

Posted by Civilian Reader at 5:10 AM