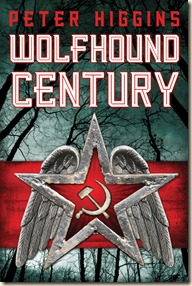 In the first of this week’s Upcoming news posts, I give you Peter Higgins’s Wolfhound Century. It appears to be a Russian-set Urban Fantasy, which will be a nice alternative to London- and/or US-based UFs. It’s another title I heard about a while ago (when the artwork was first revealed earlier in the year), and I think it sounds really interesting:

Inspector Vissarion Lom has been summoned to the capital in order to catch a terrorist — and ordered to report directly to the head of the secret police. A totalitarian state, worn down by an endless war, must be seen to crush home-grown terrorism with an iron fist. But Lom discovers Mirgorod to be more corrupted than he imagined: a murky world of secret police and revolutionaries, cabaret clubs and doomed artists. Lom has been chosen because he is an outsider, not involved in the struggle for power within the party. And because of the sliver of angel stone implanted in his head.

On Orbit’s blog, back in March, their article about the book was entitled “Golems, Gulags, and Sentient Rain”… How can that not grab your attention?

Wolfhound Century will be published by Orbit US in March 2013.

Update: Just noticed that Wolfhound Century will be published in the UK by Gollancz, also in March 2013.