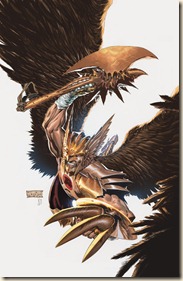 Carter Hall is back as the Savage Hawkman. Carter’s skill at deciphering lost languages has led him to a job with an archaeologist who specializes in alien ruins. But one of his latest discoveries is Morphicius, whose deadly power helps to spread an alien plague through New York City. With innocent lives in the balance, Carter Hall must use the power of the Nth metal bonded to his body to don his wings and become Hawkman…

I’ve already reviewed the first three issues of this series on the site, but this is a complete review, and incorporates some of my earlier comments. My initial thoughts stuck around for the whole series, and I think it is a pretty strong overall story, complemented by some great artwork. The antagonists are interesting and original, and the struggles against them are fast-paced and pretty no-nonsense. It’s not the best series in the New 52, but that’s not to say it’s bad.

The book includes the first two storylines – the first sees Carter face off against Morphicius, an alien parasite entity (total badass), who is drawn to the Nth Metal that makes up Hawkman’s armour and weapons. At the start of the book, Carter is attempting to get rid of the armour, but something strange happens and it bonds with him instead, giving him a little more control and access. These three chapters offer a great introduction to Carter Hall and Hawkman for new readers, as he tries to adapt to his armour’s new state. 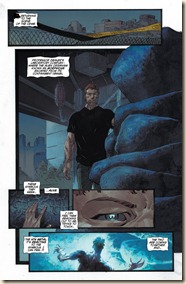 We learn about some of Carter’s relationships with the others from the archaeological group. He’s not really a people-person, and seems to have perfected the art of the Brood. We are introduced to the mysterious Dr. Hogarth Kane, but not really much about why he’s so interested in Morphicius (let alone how he knows about the alien creature). Things get rather weird at the end of the Morphicius arc, one character in which will resurface in the final, semi-stand-alone chapter of the book.

The second storyline, which was new to me, was more horror-esque, as the walking dead intrude on Carter’s life. Gentleman Jim, an undead badass, also drawn to Nth Metal (noticing a pattern), is after the key to immortality. The antagonist is ambivalent to the cost his quest will require, and Hawkman must rush to stop the mass-slaughter of New Yorkers. In the process, he meets Static, the star of Static Shock (the already-cancelled New 52 titles) who seems entirely unfazed by the arrival of hundreds of zombies…

It’s not difficult to see why he was trying to get rid of the Nth metal at the start of the series, given how attractive it is to unsavory characters... 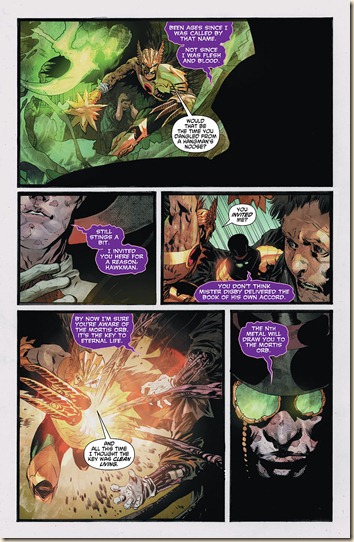 I’m not entirely sure what I think of this title. It’s interesting, for sure, but the story seems to move both slowly and fast at the same time. It doesn’t flow quite as well as many of the other titles I’ve been reading. Some things appear a little too easy or convenient, and there are a few jumps in time (only minor), but it seems that in order to keep this to four issues, they’ve really upped the tempo. I’ll read the next issue for the sake of completeness, and because I would like to know what happens to Morphicius.

I really like the art for the series: it’s moody, alternately detailed and rough (though it looks more as though it was painted, rather than appearing like a scratchy sketch). 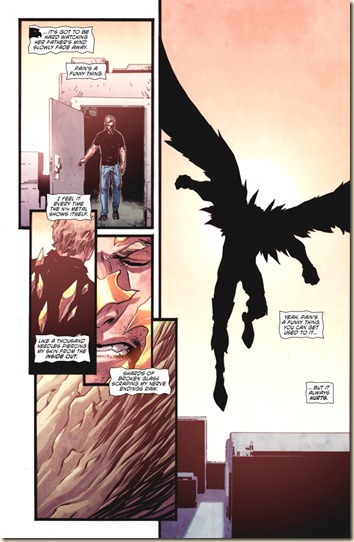 There’s a lots of action – it’s near constant, actually, which will certainly appeal to many comic fans. For me, however, I thought the story could have benefited from some more character development, some more personal narrative, and fleshing out Carter’s non-action life. The only other niggle I had was that the dialogue can sometimes read a little like a ’90s action movie.

Originally I wasn’t sure if there was enough to the story to hook me and keep me coming back. Now that I’ve read the first eight issues of the series, I find myself keen to learn and read more about Hawkman and his adventures. Count me in for Volume 2. 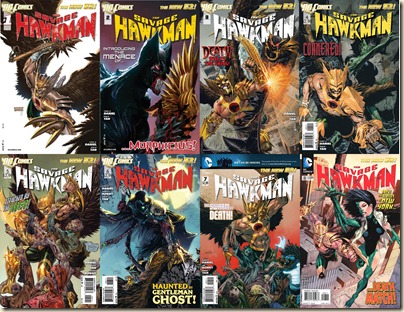 Posted by Civilian Reader at 2:55 AM