“The Darlings” by Cristina Alger (Penguin) 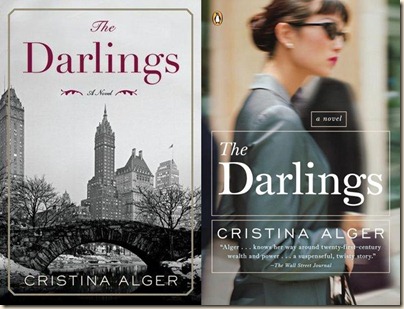 A NY Society Novel set during the Financial Crisis

Since he married Merrill Darling, daughter of billionaire financier Carter Darling, attorney Paul Ross has grown accustomed to all the luxuries of Park Avenue. But a tragic event is about to catapult the Darling family into the middle of a massive financial investigation and a red-hot scandal. Suddenly, Paul must decide where his loyalties really lie.

I first heard of this novel when the author was doing a signing at my then-local Barnes & Noble. I have a weakness for anything set in New York, so The Darlings automatically went onto my “To Read” list. Quite some time has passed since then, and I’ve finally managed to get around to reading The Darlings. Sadly, it was a disappointment. While tightly written, I was unable to develop even a remotely sympathetic attachment to the main characters. Perhaps a victim of its relatively short length, I found this novel wanting.

I almost wish I had hated this novel – that way, I would be able to generate the emotion and energy to write at length about it. Sadly, I just felt completely disconnected and unfulfilled by it. The characters were Gossip Girl-lite, in that there was nothing particularly unique or noteworthy about them, while also lacking the teenage melodrama of that CW show. In fact, some over-the-top drama could have improved this novel immensely. As it stands, I wonder if Alger made a conscious effort to make the characters bland, in order to avoid sympathy and attachment. There was, frankly, nothing unique about the characters at all. They are also slightly boring, and absolutely true-to-type, as if they were simply called from central casting because they needed a Hedge Fund Boss and Family Patriarch, an Enthusiastic Social-Climber, an Earnest Young Lawyer who’s in the wrong place at the wrong time. I would be willing to accept that this was intentional, but if that was the case, then I don’t understand what the point of the novel was – there was nothing particularly distinctive about it. The twist at the end was also underdeveloped and utilised, and just sort of hung there.

As someone who has been working at a New York publication for the last few months, I enjoyed the characterisation of Duncan, the editor of Press. I thought he was well-done, and a nice amalgamation of a few New York journo stereotypes. Hi assistant, Marina, actually provided one of the only truly human moments, when she calls her parents – it was genuine, heartwarming and felt very real, and I wish more of the novel had been from her perspective.

The novel is certainly quickly-paced, and Alger’s prose is tight and well-crafted (save the typos that slipped through – of which there were more than there should have been from a big house like Penguin). The narrative did have the strange effect of sucking me in, while also not generating empathy with the characters. It was interesting to read a novel based around the 2008 Financial Crisis, and a Madoff-like Ponzi scheme. There are a few nice observational touches throughout the novel, but they weren’t enough to really make it stand out or reach the levels of praise that I see printed on the cover.

Alger is a former analyst at Goldman Sachs, an attorney, and the daughter of a Wall Street financier, and yet I never really felt like I was getting anything that suggested a “unique insider’s perspective”. True, I’ve read a lot about Wall Street and the financial crisis, so a lot of the explanations of processes weren’t new to me. I was never given an impression of the scale of the scandal (save that it was spelled out in dollar-terms), and the narrative didn’t thrill.

I read this quickly, and Alger’s prose is certainly good. But for her next novel to work for me (I will be reading it), more attention will have to be paid to the mechanics of the story, not to mention characterisation. This was disappointing, but does show some glimpses of potential that I really hope are fulfilled.

A few of the other reviews for The Darlings name-checked a couple of novels that I think may be better, or at least in the same sub-genre, which I hope to check out in the future: Claire Messud’s The Emperor’s Children and Jonathan Dee’s The Privileges. I’d also recommend America, America by Ethan Canin (which I though was superb, and reviewed here).

Posted by Civilian Reader at 7:55 PM