I started reading Bernard Cornwell’s novels in the Summer of 2001 – it was the end of my first year at university, and I picked up Harlequin. Being the author-obsessive that I was at the time (I would find an established author, read everything he/she wrote), I picked up Sharpe’s Tiger. And was hooked. I proceeded to read every Sharpe book that was published at the time and, after moving there for a year, even ordered them to Japan. (Oh, the postage charge!)

Harper have just re-released the entire series with some very nice, vintage-look jackets. As I’m probably not going to be re-reading them and reviewing them any time soon, I thought I would nevertheless share some of the new covers. 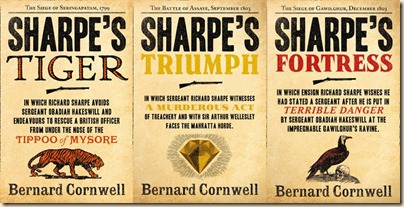 If you have never read the series, and own a Kindle, Sharpe’s Tiger is only £1.99 on Amazon UK. If you have any interest in historical fiction, then I strongly recommend you give the series a try.

[And, please, excuse the high level of improbability that a single man would participate in the sheer number of battles Richard Sharpe finds himself in…]