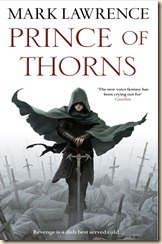 Prince of Thorns is one of the most hotly-tipped debuts of the year, and its release has been preceded by quite a lot of online uzz. After reading it, I can see why: it’s pretty incredible. Lawrence has written a dark and engrossing tale, and one that grips from very early on.

Prince of Thorns is the story of one young prince’s journey back to his place among high society: he fled his life as a prince after the murder of his mother and brother irrevocably broke him, and life at the Tall Castle – with a father who may be the only person colder than Jorg – became suffocating and infuriating. Taking up with a band of thugs and rogues, he very quickly forged for himself a life as an outlaw, assuming leadership of the band and leading them on their constant quest for riches and mayhem.

The world Jorg inhabits is harsh, an eternal struggle for the poor to make ends meet, and between nobles and lords over the remnants of a once-glorious empire:

“A hundred fragments of empire grinding away at each other in a never-ending cycle of little wars, feuds, skirmishes, kingdoms waxing, waning, waxing again, lifetimes spent in conflict and nothing changing.”

Jorg wants to end this cycle. To win by any and all means necessary, and unite the fragments of the former empire, to become Emperor himself.

The novel has a large and colourful cast, but Jorg remains at the very centre of the story, so any review will have to focus on him. Jorg is not a pleasant protagonist. In fact, many readers might be put off reading Prince of Thorns by his objectionable character and lack of morals. However, this would mean they’d miss out on an intriguing, extremely-well-written and original fantasy. We’re not supposed to like Jorg, and I can understand where objections would come from – for the first few pages, I was a bit uncomfortable about reading a novel about a callous, sociopathic teenager (we hear enough about them in the news). But, as Jorg’s story unfolds, as we see where he’s coming from, we accept the choices he makes – not support them, or even applaud them, but appreciate that he gets results. Lawrence has not written a character to love, rather he has written a story to engage the reader with themes and a cast that will force us to think about the darker aspects of life. This isn’t heroic fantasy. This is something much darker, more original and gripping as a result.

Despite his obviously unattractive nature, Jorg is nonetheless quite charismatic, in a scary and troubling way. His sociopathic detachment is chilling. He is calculating and willing to sacrifice anyone and anything. He has very grand ambitions, but they are not rooted in any noble quest. Nevertheless, he gets things done and, as long as you don’t find yourself at the sharp end of his temper, those who follow him do end up taken care of. His twisted sense of loyalty to the Brotherhood means he is able to keep some truly twisted individuals in line – even Rike, who is nothing if not worse than Jorg, and brother of the group’s former leader. Throughout the novel, Jorg and Rike clash over decisions, leadership, and general quarrels born of Rike’s unmanageable rage.

Bearing in mind that Jorg is only 14 (something I kept having to remind myself of, as he doesn’t act like someone in their early teens), we get some flashbacks that explain life in the Tall Castle following the murders, when and how he left the life of a prince to join the band of (bastard) brothers, how he became leader of the outlaws, and how his cold core developed further on the road. The flashbacks are interesting, and add a lot more flavour to Jorg as the novel progresses: we come to understand a little more of why he is such a bastard – this doesn’t necessarily make us come to like him any more, but does explain some of his inner darkness.

Jorg isn’t, actually, all bad – we come to see that he has a slight soft-spot for abandoned and downtrodden boys, and clearly needs the fraternity (messed up as it is) of his Brotherhood of rogues. Throughout the novel, despite his harsh and sometimes brutal treatment of his followers, there’s a sense that he still needs them around him, enough so that he will never lose all his brothers again. It’s an oddly touching side to him, one at odds with his otherwise repellent nature. His connection with Makin, a former captain of his father’s guard, provides some tether and tempering of his worst impulses and tendencies, as well as a connection to his former life. There is a moment towards the end of the novel which properly highlights how the remnants of Jorg’s compassionate side wars with his overwhelming ambition, and while the outcome will please readers, it does not appear to be all Jorg’s doing, but rather Makin’s. Jorg’s relationship with the Nuban is perhaps closer – a foreigner and out of place among the brotherhood and this land, Jorg forms a bond with him as outsiders, saving his life a couple of times to cement the bond further.

At first, I didn’t understand why things from our own world/reality were mentioned throughout the novel. For example, Jorg mentions a lot of his education and the reading he was forced to do – Socrates, Nietzsche, Plutarch, Aristotle – and the main religion is Christianity. Reference to real-world places, people and ideas is something that Paul Hoffman did, too (in Left Hand of God and The Last Four Things), but in a far more clunky manner. Where Hoffman doesn’t ever account for his borrowings, Lawrence does, and despite their seemingly out of place nature, things do begin to make sense (more or less) towards the last third of the novel. The novel is set in what appears to be some dystopian far-future, in which some cataclysm has thrown civilisation back to a feudal state, millennia ago (1,111 years ago, to be exact). I’m not entirely sure what I think of this development, if I’m honest. It didn’t effect the flow or pace of the novel, but did throw up some intriguing things towards the end, as we get a glimpse of players behind the scenes and a foreshadowing of what we might come to learn more of as the trilogy progresses.

Even if you dislike the idea of reading an anti-hero, there is little chance that you won’t be swept up by Lawrence’s writing style. It’s incredibly good: very quickly-paced prose and a fast-moving plot meant it was very hard to put this novel down, and I found myself reading into the early hours of the morning each time I picked the novel up (I read it over two evenings and nights). Lawrence’s prose is expertly crafted, the dialogue is great, and the story interesting and engaging. That the novel is not a beast in terms of size also helps it, although the author does manage to cram in a lot of plot into a comparatively short novel – we witness raids, court politics, and an underground infested with mutants and necromancers. There are also some instances of very good, dark humour, which match the tone of the novel and characters perfectly.

Prince of Thorns is one of the best-written debuts I’ve read in a while. It is a novel of control and overcoming things that control you – emotions, circumstance, other people. It won’t appeal to all readers, but anyone who gives it a chance is in for a dark, engrossing read. As the novel ends, we are left with a couple of mysteries that need solving, and hints of bigger things still to come. I can’t wait to read about them. Dark and riveting, the early hype for Prince of Thorns is entirely justified.