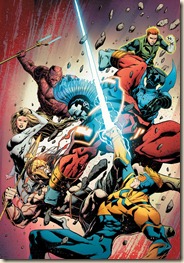 Trying to collect themselves after an extra-terrestrial attack and death of a teammate, members of Justice League International expected to bask in glory and appreciation. However, Booster Gold, Guy Gardner, Batman and company are learning that's not the case as a new threat, one far more dangerous than anyone dared suspect. Called Breakdown, he emerges and attacks with dire results, forever altering the team and sending it in a bold, new and unexpected direction!

This is the final volume of Justice League International. And, sadly, I can see why the series was put out to pasture. The series was amusing in its slight-badness in the first volume, but the first couple of chapters in this book perfectly highlighted the flaws and weaknesses in the series. I can’t speak to whether or not the authors just didn’t have their hearts in it, but it never reached the heights it should have. Also? That’s an awful lot of cooks in the creative roster...

The book starts at right where Volume 1 left off, in the aftermath of the giant explosion at the Justice League International pep-rally, following their first significant victory. The story has some randomly inserted “energy creatures” which weren’t there in the previous book. The book’s story is pretty… meh. What really stood out for me, unfortunately, was the lackluster writing. It felt like the team were phoning this in.

There is a lot wrong with the first few chapters in this book, unfortunately. For one, the dialogue is stiff, stilted and at times just plain bad. For example, “I wanted us to be something. Instead I got death and tragedy.” And a little later, when Lightweaver’s battling against the members of the JLI who are still standing, “Solidified light. Eat it.” Seriously. That’s actually what he said: 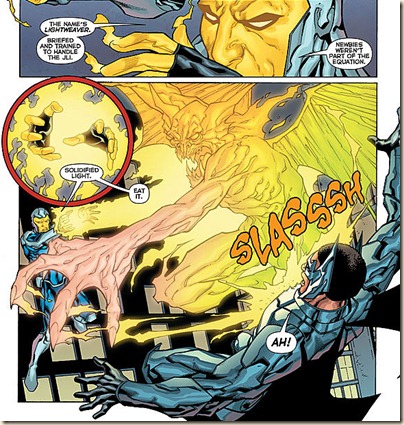 The dialogue issues continue in the funeral chapter. The bad guy, who gets soundly defeated by Batman after he manages to take out most of the JLI and make it clear that his intentions are to kill them all. He is given a lecture, and then… “You don’t have to say another word. I can tell... I know you’re right. I’m sorry.” Godiva (the female character with the magic hair – yes, you read that right), follows this up with: “Well. Now that that’s settled... Where do we go from here?”

To top this whole, bizarre situation off, Guy Gardner moments later dismisses him with a “All things considered – I saw we give you a pass. Go on. Beat it. And stay out of trouble.” He tried to kill them! 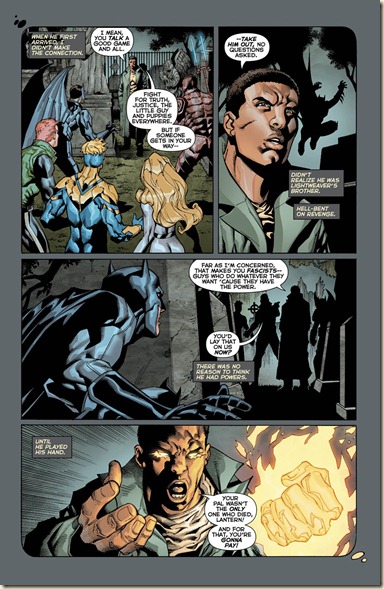 There was a pretty interesting (not to mention better-written) chapter featuring Firestorm, a character/series that I’ve not had the chance to check out just yet. This chapter did enough to make me more intrigued to give it a try. “Nuclear missile wrapped in spandex,” as Booster calls him. 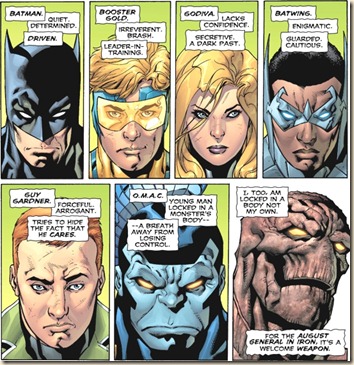 The Annual issue (written by Geoff Johns and Dan DiDio), tacked on to the end of the book, was sharply illustrated and a stronger tale. At the same time, it was typical of a lot of the end-of-year issues in the New 52: riddled with hints and cryptic allusion to what’s to come. Only, I still didn’t get it, despite reading a rather large number of New 52 titles.

The warlord, at the start, blew himself up. Batwing claims the “device was small. Undetectable.” Actually, it was obvious from the start that he was wearing a suicide-bomb vest. It looked exactly like a lot of explosives strapped to his torso would look.

Things then get really strange in the JLI’s new HQ, as O.M.A.C. (who joined the team early in the book) goes crazy. There’s also some time-travel, a link to the events at the end of Justice League Volume 2, and so many “tantalising” (read indecipherable and irritatingly vague) hints of what’s to come... somewhere else. As this is, after all, the final JLI book. I’ll do some digging. But really I just couldn’t see the point: the series was obviously not widely-read, so why sprinkle seeds of events to come into the series?

There were some simple typos in the book, the appearance of which were rather disappointing, For example, “Andy sign of the August General or Rocket Red?” There’s not exactly a huge amount of text in these pages, so something like this should have been caught.

For all the faults in the story, I should mention that the artwork is pretty strong throughout – and especially, as mention just before, the Annual. The colours, the images, and whole composition is strong and eye-catching. It’s a nicely put-together book, it’s just so frustrating that the story itself is so lackluster.

This book wasn’t quite as fun as Volume 1, and almost the whole book felt like one long, extended death knell for the heroes (save for Batman, of course, who has plenty of series in which he crops up). One character dies at the start, three are in the hospital for the duration, another ends up comatose at the end, and one just disappears. I can’t even tell which series they spin off into, which is a little frustrating.

Overall, it is entirely understandable why they shut this series down. A real shame. 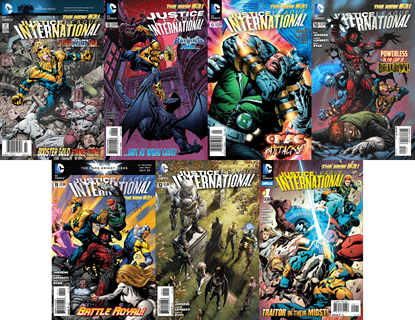