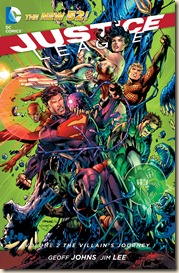 The Justice League is the greatest force for good the world has ever seen. But not everyone sees them that way.

Their never-ending battle against evil results in casualties beyond its super-powered, costumed combatants. The League’s attempts to safeguard innocent lives cannot save everybody. Unbeknownst to Earth’s greatest champions, their greatest triumph may contain the seeds of their greatest defeat.

For heroes are not the only people who face tragedy and are reborn as something greater than they were before. Villains can take this journey, too.

And once they start out on this dark path, the road could lead straight to the destruction of the Justice League…

I read Justice League #1-9 as single issues, so I read this collection mainly so I could catch up. It’s a solid series and, while I sometimes wonder at the overall structure and direction of the series (there are altogether too many ‘hints’ for the future), one that is very enjoyable to read.

The first two chapters of the book actually aren’t really part of “The Villain’s Journey”, despite having a “Villain’s Journey: Prologue” title… It felt like they were just marking time before the larger tale actually kicks in. This issue shows readers some of the well-portrayed tension between the US Congress and Colonel Trevor, the League’s contact with the US government. As usual, they want more control, don’t trust the League to do what’s in America’s best interests, and so forth. Nothing particularly new, here, but it’s well-handled and well-presented. I kept forgetting that the Justice League is so America-centric, so I do like how often that fact pops up in this series (and also in new Superman stories – for example, Superman Earth One, Volume 2). After setting the scene in the first six issues of the series (or the first volume, if you’ve only been reading the collections), it feels a little bit like we’re treading water at this point. 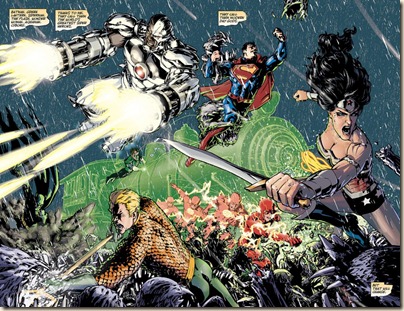 Welcome to the Day Job

In the second chapter, Green Arrow is trying to get a place on the League. He’s the kid on the outside, wanting to get in with the cool kids. They are not amenable to new team members. I thought this was a pretty amusing idea, not to mention an interesting approach to portraying the League: they come across as extremely inflexible, and even like assholes in their opposition to Arrow’s overtures. There was no specific reason for them to wholeheartedly reject his involvement, save the possibility that they didn’t want to share the limelight with anyone else. It seemed exceptionally douche-y for the “World’s Greatest Heroes”… While he’s trying to make headway with the League, there’s some minor cross-over with the Night of the Owls Batman event, and also events in the forthcoming ninth issue of Justice League Dark. The chapter was fun, but I’m not really sure what purpose it served beyond a quick diversion from the more-series, up-coming “Villain’s Journey” arc. 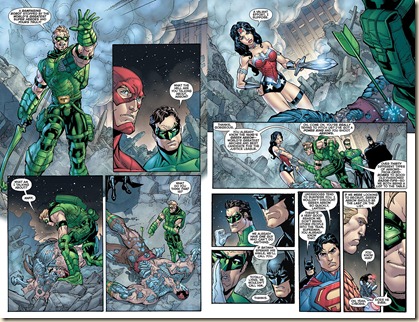 “Please can I be part of the team?! Look, I shot someone in the ass!”

The final three chapters are “The Villain’s Journey” proper, and center around two things. The first is Mr. Graves, who wrote the book on the Justice League, Gods Among Men. This book has popped up in past issues a couple of times, but mainly just as asides. As it turns out, he’s extremely unwell and probably dying, and has gone from viewing the Justice League as super-human, near-godlike creatures to being embittered and resentful of them. He has a plan, and to start with, he’s going to collect as much information as he can on the League members – their strengths, limitations, personal hang-ups and more. The second story-line focuses on the Justice League members and how they are coping with being part of a super-team, working together rather than just solo, and also handling their alter-egos (if they have them).

There are some really nice touches throughout this story – for example, it looks at the loneliness some of the League members feel. But also, it examines the extent to which the Justice League gives them almost a community base.

The League is starting to settle down, and there is fun dynamics within the groups that have formed. For example, Superman, Batman and Cyborg are very focused and results-oriented. Green Lantern and Flash have a little more fun, more patter and appear to take things a little less seriously. There’s a great moment, actually, which perfectly highlights certain members’ approach to their role: Batman texts Superman about his lunch plans – only, instead of going out for sushi or tacos, they put down a riot at Arkham Asylum. 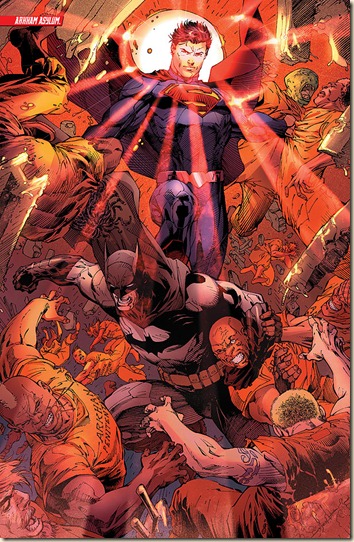 Yeah. Superman isn’t meant to be at all a god-like figure…

Colonel Trevor, who as well as being the League’s liaison is also Wonder Woman’s former lover, goes through quite an ordeal at the end of chapter nine. Those pages are particularly brutal, rendered in wince-inducing detail.

Graves, in the course of acquiring power for himself, and knowledge of how to defeat the Justice League, is pursuing a vendetta – he believes his family were killed by the League, and as a result he wants to make those who are close to the heroes suffer as much as humanly possible. At the same time, he wants to destroy their reputation. By targeting their loved ones, he creates further tension between the members, which results in an all-out brawl. 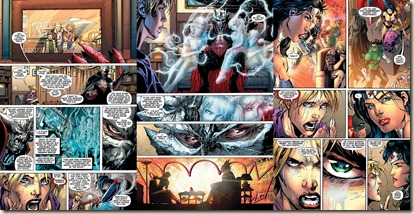 Graves is creeeeepy… One sinister mo’fo’.

In the final chapter, we learn of Graves’s real plan, and his twisted attempt to achieve it. The reasoning behind some of his decisions. We also learn that the members of the Justice League can be a bit gullible (how many times will heroes fall for the fake-spirit-of-a-loved-one trick?). It’s not a huge problem, but I found myself amused that this trope just keeps being used decade after decade…

The story finishes with some soul-searching, as the League members take into account what Graves accused them of, and they plan to reassess the way they deal with the threats that are likely to come their way. As Green Lantern says,

“We’re not gods… When we do what we do on the scale we do it, people get hurt. The fact is, the Justice League can save the Earth every day, but we can’t save everybody on it every day. But that doesn’t mean the League shouldn’t try.”

Overall, I would say this is a very good series if you’re new to the DC Universe. It has all the core heroes, hints of and links to other series, and is very well-written. Johns and company have made this a very enjoyable read – the story is strong, and the artwork is amazing. There are a number of fantastic, eye-popping full-page panels and also a few double-page spreads that almost made my jaw drop.

It looks like things are going to settle down a little more, and there may be a more linear storyline, now, a little more focused and forward-looking. That being said, the book also includes some snazzy preview images for what’s coming up in the second year of Justice League and also wider developments in the DCU (for example, the return of Justice League America, updated for the New 52 continuity). If you haven’t read any of this series yet, I strongly recommend it for the story and artwork. If you’re a fan of other New 52 titles, then you should check this out as well.

What started as a bit of an unfocused book ended with a very strong story. Recommended. 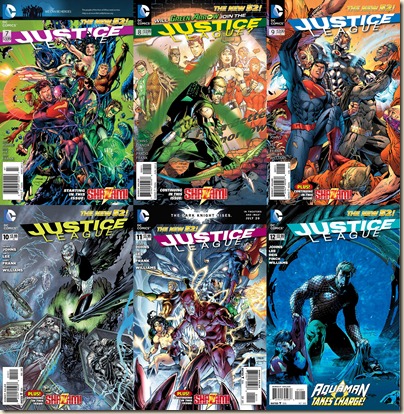 Posted by Civilian Reader at 2:52 AM