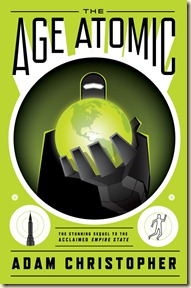 Adam Christopher’s already-published novels remain two of the 2012 releases I really need to get to. I’m particularly interested in Seven Wonders (which will feature as part of a series of super-hero-related reviews going up in the next month or so), but his debut Empire State is also high on my TBR pile. I hope to get to it before The Age Atomic, its sequel, is released in April 2013. Here’s the wonderfully garish and retro artwork, and also the synopsis:

The Empire State is dying. The Fissure connecting the pocket universe to New York has vanished, plunging the city into a deep freeze and the populace are demanding a return to Prohibition and rationing as energy supplies dwindle.

Meanwhile, in 1954 New York, the political dynamic has changed and Nimrod finds his department subsumed by a new group, Atoms For Peace, led by the mysterious Evelyn McHale.

As Rad uncovers a new threat to his city, Atoms For Peace prepare their army for a transdimensional invasion. Their goal: total conquest – or destruction – of the Empire State.