It’s been a good week for cover-reveals. Yesterday, there was Chris F. Holm’s excellent The Big Reap (Angry Robot), and today it was Peter V. Brett’s highly anticipated The Daylight War. The third book in the Demon Cycle, its US cover was revealed a short while ago,and I really liked that cover – it was bold, with striking colouring and an excellent composition.

Now, revealed first on the great Fantasy Faction, we have the UK cover art (to be published by Voyager also in February 2013), done by the great Larry Rostant: 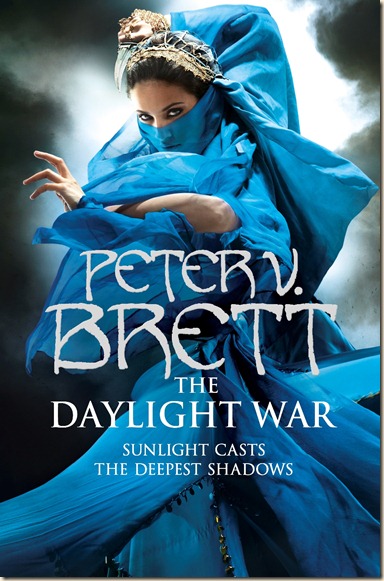 Do I prefer it to the US edition…? Well, maybe. I think it will match the first two novels better on the shelf, but I think they are both very good. Hopefully I’ll catch up with the series (I loved The Painted Man and the two novellas – The Great Bazaar & Brayan’s Gold), so I can read this third novel relatively close to its release.

Posted by Civilian Reader at 2:31 AM