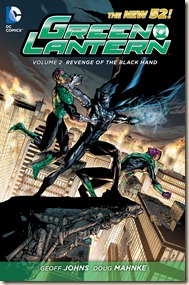 Hal Jordan and Sinestro find themselves investigating a crime that leads them deep into the homeworld of the Indigo Tribe. As their situation grows more and more dire, the unlikely team of these two Lanterns uncovers a secret that will change the Green Lantern Corps forever!

Following hot on the heels of the excellent first collection, “Revenge of the Black Hand” ups the ante and continues the strong story-telling I’ve found in the whole series. Consider me a convert to Green Lantern and its related series. This is another great book.

As the book starts (at the moment the previous collection ended), Sinestro is still trying to manipulate Hal Jordan into working for him – and takes it a step too far in the beginning, by going after Carol, Hal’s lover and also a Star Sapphire (another Light Ring group, violet, this time powered by Love): 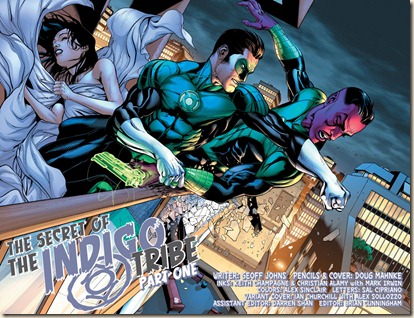 Never go after the Girlfriend… #EvilVillainTips

While discussing Carol, I should say that I’m disappointed she doesn’t feature more in this series – she provides a lot of Jordan’s motivation, and yet doesn’t really take part in much of the story except as a plot device and not much else. A pity. I believe she features more in New Guardians, but I could be wrong about that.

After attempting to blackmail Jordan into helping him once more, the Indigo Tribe – another sect of Lanterns, this time powered by empathy – decide that the Guardians were wrong to give Sinestro his green ring back, so they appear out of nowhere and take him into custody. He is not a meek prisoner, by any means, and we are shown some more evidence of just how bad-ass Sinestro really is (the frequency with which he refers to himself in the third person is a little amusing). Hal’s still struggling with an under-powered ring  at the beginning of this book, which makes his attempts to escape the Indigo Tribe’s prison a little more difficult than expected. (He was captured alongside Sinestro.) 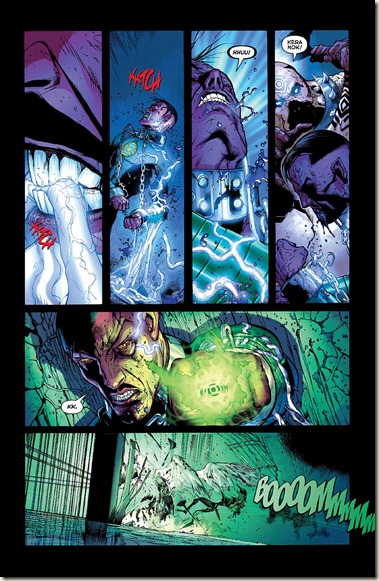 Ain’t nobody lockin’ Sinestro in a cage…

The story moves rapidly on from here, and we not only are presented with a fast-moving rush to prevent the extermination of the human population, but also a good deal of extra background and context. For example, we learn a little more about Sinestro’s take-over of Korugar, his home-world, and the tragic loss of someone close to him (caused, shockingly, by a child suicide-bomber). Readers will also get the history of the Indigo Tribe – how they were created, who they are, and why – which I found quite interesting and original. The final chapter in the book (which was published first at the first New 52 Green Lantern Annual) also provides a handy primer for the Guardians’ motivations and the history of their methodology, and their frustrations with the continued chaos in the galaxy. Their proposed solution is horrific, and reminded me a little of I, Robot. 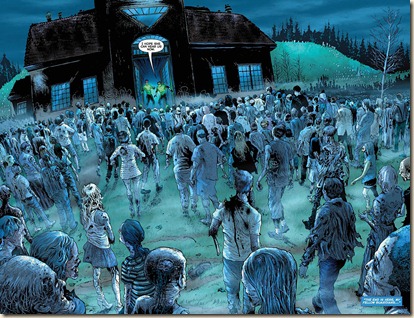 Through the Book of the Black, which he acquired near the end of volume one, Sinestro has seen glimpses of the future and got wind of the Guardians’ ultimate plan to replace the Green Lanterns Corps with a “Third Army”. While this force only actually appears towards the end of the final chapter in this collection, we see the Guardians maneuvering their pieces into place. Sinestro is determined to prevent the dissolution of the Green Lantern Corps (translation: termination). When Black Hand comes back on the scene, his mission is only slightly side-tracked.

The character Black Hand is central to some of the over-arching mystery and, assuming I’m reading the hints right, the future of a certain Green Lantern. Black Hand is the antagonist in Blackest Night, which this story-arc refers to a good deal. (Knowing this has, of course, ratcheted up my interest in that story arc even more – despite, clearly, getting a bit of a spoiler here for its outcome.) Even though I haven’t read it, I didn’t feel particularly lost, and the exposition and context provided within the text was certainly helpful (if, at times, a little clunky). 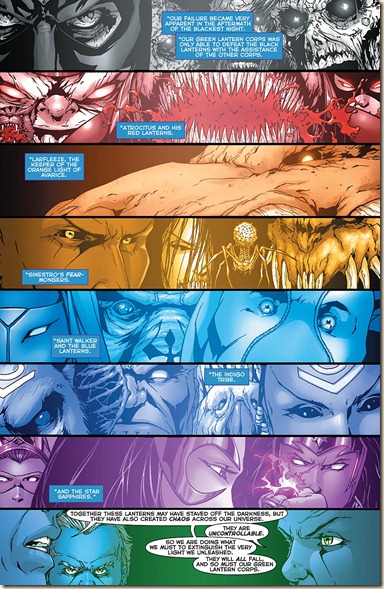 “Revenge of the Black Hand” is another very strong book and continuation of the series. There were some slightly uneven skips in pacing – for example, once Natromo discovers that Abin Sur is dead, he seems to move very fast, accelerating a bit of a disaster – but for the main this is a very well-scripted story.

The artwork remains very strong, as can be seen from the examples included in this review. The palette remains heavily green, dark blues and blacks. maintaining a moody-yet-vibrant look that is quite striking. The art team must be among DC’s best.

For anyone who has been following the series, this is an absolute must-read. I can’t wait for the third volume (I’m afraid I simply can’t afford to buy the individual issues anymore. 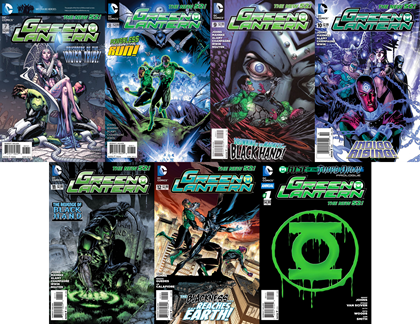